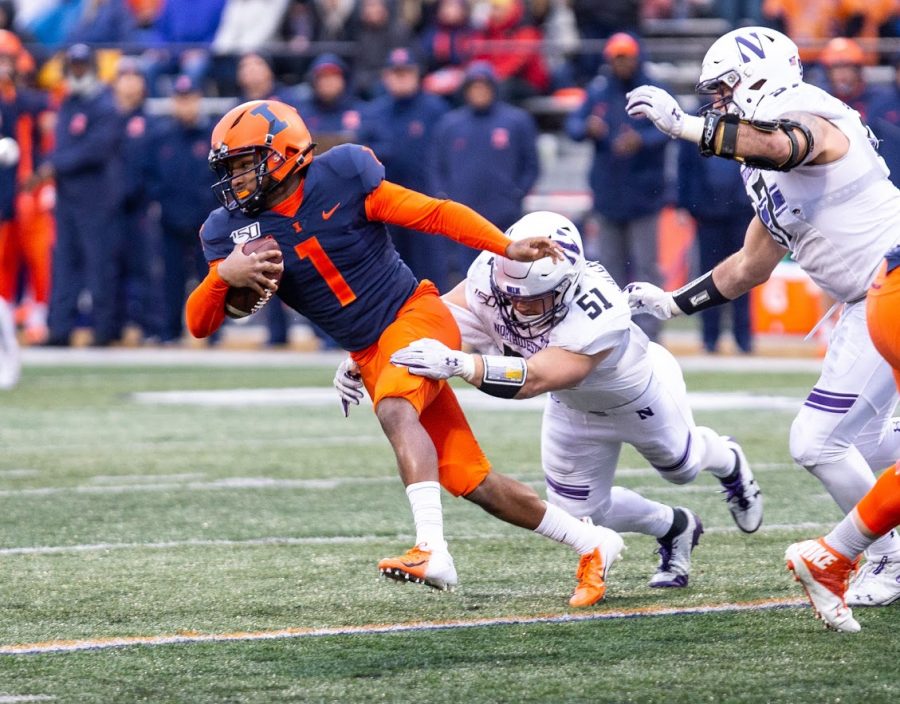 Illinois Quarterback Isaiah Williams slips through a defender’s tackle during the match against Northwestern on Nov. 30, 2019.

Last week, The Athletic wrote countless articles about uniforms at all levels of sports, so I approached my editor Gabby Hajduk about doing something similar for Illini athletics. Thankfully, she agreed.

This week you will see opinion stories, like this one, and stories asking players about how uniforms are decided and players’ favorite uniforms. Hopefully, you enjoy reading about the uniforms Illini student-athletes compete in.

In 2018, Illinois released new uniforms in their continued partnership with Nike. The new uniforms are inspired by the uniforms that former Illini linebacker Dick Butkus wore in the 1960s. The current uniforms, which don’t feature stripes or number outlines, replaced a set of uniforms with outlines on numbers and stripes.

Illinois rotates through three main helmets, jerseys and pants, all of which come in orange, blue and white. On Homecoming, the Illini sport their “Gray Ghost” uniforms, which are meant to honor former Illini great Red Grange.

The 2019 season featured a couple of different uniforms combinations, but certain combinations seemed to become more common than others. Let the rankings begin.

Illinois has good uniforms, and they don’t need to be changed for a couple of years because they look good on the field, which what is most important. Going into the 2020 season, I would like to see Illinois create some combinations for home games that they haven’t worn in the last couple of seasons. Just stay away from an all-orange look, it hurts my eyes.