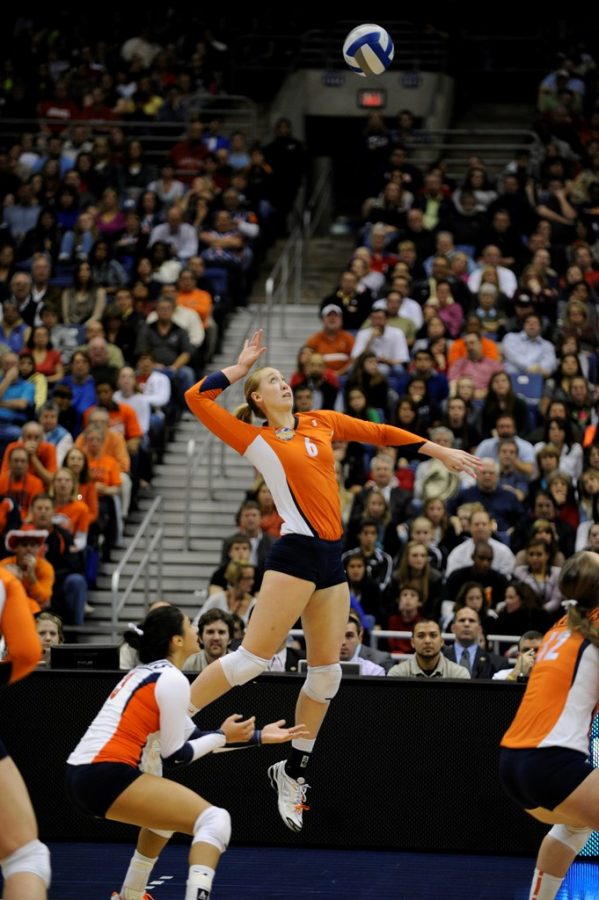 Senior Michelle Bartsch serves the ball during the NCAA Championship against UCLA on Dec. 17, 2011

Over the years, the Illinois volleyball program has had many impressive seasons. One national championship appearance and four Final Four’s headline their achievements. The Illini have had so much success due to the skilled individuals that have passed through the program. Here are the all-time starting six.

Mary Eggers is the most decorated player in Illinois volleyball history. Eggers, a four-time All-Big Ten first-team selection, three-time First-Team All-American, and winner of the Honda Broderick Award as the nation’s top player, ranks third in kills all-time for Illinois and first in kill percentage.

Eggers’ play led to team success for the Illini as well. From 1985-1988, Illinois made four NCAA tournament appearances, three regional finals, and two Final Fours in back-to-back years. The Illini also won the Big Ten in three consecutive seasons, with Eggers being named the Big-Ten Player of the Year in each.

Eggers led the nation in hitting percentage in 1986 and 1988, and her .420 hitting percentage was the NCAA record until being broken in 1993. Eggers went on to play with the USA Olympic team for a year and a half and played professionally in Europe for two years and is now the head volleyball coach at Elon University.

Possibly the best defensive player in Illinois history, Johannah Bangert set many records during her time as an Illini. She graduated as Illinois’ all-time blocking leader with 653, which she still holds today. She also holds the Big-Ten record for most block-assists in a career with 613.

The Illini made the tournament in three of her four years at the school but never were able to make it past the regional semi-final. After graduating from Illinois, Bangert played volleyball overseas in Sweden for a year and a half with the Ljungby Volleyboll Klubb and is still Illinois’ all time-leader in both block assists and total blocks.

Jocelynn Birks is the all-time kills leader in Illinois history. She is one of only four Illini ever to be a three-time All-American and was able to get the job done for the Illini on the offensive side, as well as the defensive.

Birks crushed records at Illinois. She has 139 more kills and 850 more total attacks than the second most in Illini history. To go along with her offensive skill, she is also top-10 in Illinois history in digs. Birks was a rare six-rotation player and was able to record 1,159 career digs, seventh all-time for the Illini.

The Illini made the tournament in 2013-2015, Birks’ final three years with the team. They never made it past the regional semi-final, but she was known for her clutch play in intense matches for the Illini.

Jordyn Poulter is not only one of the best players but leaders to come through Illinois’ program. Third, on Illinois’ all-time assists list, Poulter was a key leader and player in the Illini’s Final Four run in 2018.

Throughout her career at Illinois, Poulter was a three-time All-Big Ten selection, Third-Team All-American and First-Team All-American in her junior and senior seasons, and was the Champaign region most outstanding player in the 2018 postseason. She was also the Big Ten Co-Setter of the Year in 2018.

Illinois reached the tournament in three of her four years. After reaching the regional semi-final in 2017, Poulter and the Illini dominated the Big Ten and made it to the Final Four, nearly missing the championship match. She was a tremendous leader for the Illini, and now is a part of Team USA Volleyball.

Beltran ranks second in Big Ten history with her 2,220 digs and was also able to achieve All-American honors her senior season as an honorable mention. She retired from the NCAA ranked sixth among active players in career digs and ranked third in the Big Ten in digs per set.

She was also the libero on the National Champion runner-up team in 2011, and Illinois made the tournament in three of her four seasons. Beltran stuck with the team for one year after playing as a student assistant coach in 2014.

A member of the Illinois Athletics Hall of Fame, Michelle Bartsch was the lead hitter during Illinois’ tournament run to the national championship game in 2011. She is third all-time in kills, eighth in block-assists, and tied for third in career sets played in program history.

While Bartsch was with the Illini, the team achieved some of its highest success ever. Four tournament appearances, four regional semi-finals, and a trip to the national championship match in 2011 headlined the team’s accomplishments, and Bartsch was a key contributor in all four of her seasons for Illinois. She is one of the most well-rounded players in Illini history.

Bartsch collected several awards in her career as well. She was Third-Team All-American in her junior and senior seasons and honorable mention as a sophomore. Bartsch also earned  All-Big Ten First-Ream twice and Big Ten Freshman of the Year and All-Freshman team honors in 2008. Today, she has been a member of the U.S. national team since 2016 and currently plays professionally in Istanbul.