Team of the century: 2011 Illini soccer deliver most successful season in history 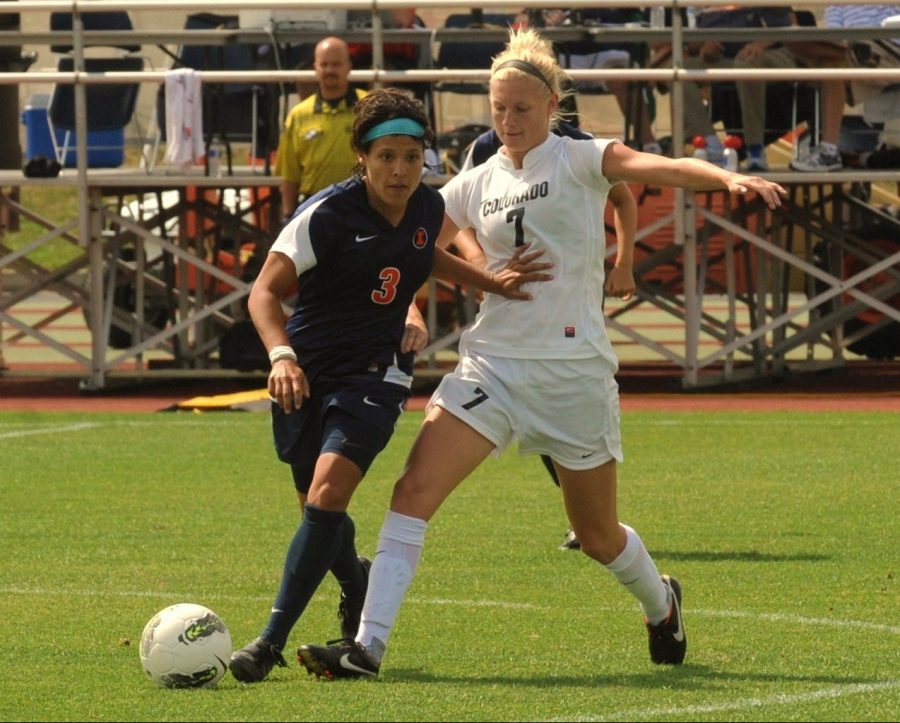 Senior Midfielder Jackie Guerra battles for control of the ball during the match against Colorado on Sept. 7, 2011.

Throughout the 23-year history of the Illinois women’s soccer team, 2011 was the best season that current head coach Janet Rayfield has seen in her 18 years as the head of the team.

Rayfield led her team to a Big Ten tournament title and second-round NCAA tournament appearance. The Illini finished the season with an overall record of 17-5-2 and ended second in conference 8-2-1.

Returning to the team was sophomore midfielder Vanessa DiBernardo who looked to continue the momentum from freshman year. The senior class consisting of midfielders Jackie Guerra and Marissa Mykines and defenders Julie Ewing, Jenna Carosio and Caitlin Dombardt were looking to get their chance to shine in the lineup.

“The coolest thing about our class was neither all five of us ever got extreme amounts of playing time until our senior year,” Guerra said. “It was a really magical season because we finally got to showcase everything that we had worked so hard as practice for the previous three years. We finally got our chance to be a really strong asset to the team and Janet Rayfield gave us that opportunity and we took that and did not look back.”

The season started off strong against non-conference opponents. Within the first five games of the season, the team had recorded 18 goals and conceded only three, scoring five goals in each game against Gonzaga, Toledo and Ball State.

Over the course of the season, the Illini dominated in conference games only losing twice to Ohio State and Penn State, while tying with Iowa State. Their effort landed them as the No. 2 seed in the Big Ten tournament.

Northwestern was the host of the tournament, so Rayfield felt like she had a home advantage since the team was still in Illinois.

“We felt very supported,” Rayfield said. “The crowd that was there to support us, in terms of family and friends, was just pretty special.”

With the Illini slated to win the Big Ten Tournament title, they started off in the first round against Ohio State. Ohio scored the first goal in the 17th minute, but the Illini came back in the final minutes of the first half after a penalty was awarded. DiBernardo stepped up to the spot and converted the penalty.

The game ended 1-1 going into double overtime and then penalty kicks to decide the winner. The Illini won the shootout 4-2 with junior goalkeeper Steph Panozzo saving Ohio State’s shot, securing them to the semifinals.

In the semifinals against Michigan State, the two teams were left scoreless during regular time. The game went into overtime, and within three minutes, senior midfielder Marissa Mykines scored the winning goal for the Illini to make it into the finals.

No. 1 Big Ten ranked Penn State was the opponent to beat if the team wanted to win it all. Once again, the game went into overtime after a one-all draw in the first half and a scoreless second half. Ewing scored in the sixth minute of play, and then again in the 33rd minute. In the 92nd minute of overtime, DiBernardo broke the tie and scored the game-winning goal to win the second Big Ten Tournament title in Illinois women’s soccer history.

“Whenever you beat the highest-ranked team in your conference, there’s some satisfaction in that,” Rayfield said. “For us, it was somewhat about the opponent, but more about the journey that we were on. It was the whole journey throughout that tournament to make sure we got to take on the top team, and I think it was kind of important for them; I think they wanted that. They would’ve been upset had someone else beat Penn State.”

A week after their Big Ten title win, the NCAA tournament was next. Placed in the Stanford Regional, the Illini faced off against defending champs, Notre Dame, in the first round.

“I remember sitting in the selection room thinking we just won a Big Ten title, we gotta get ourselves refocused, we gotta get back on this,” Rayfield said. “As soon as Notre Dame’s name came up as the ones we’re going to play, a hush came over the room because everyone realized that was a formidable opponent for us to play in the first round.”

In 40 mph winds, the Illini managed a total of 14 shots taken, forcing the Notre Dame goalkeeper to make seven saves. With a scoreless first half, junior Niki Read changed it around in the second half with a goal in the 50th minute, making it the only goal of the game.

“I played against all my former teammates and we beat them,” Guerra said. “At the end of the game, it was just one of those full-circle moments. I had just dominated the midfield with all the team and we had just a great performance and Janet said to me after the game ‘How does it feel like to beat all your former teammates?’ It was so good, so good!”

In the second round, the Illini faced a tough opponent against No. 4 nationally-ranked Oklahoma State.

“Their goalkeeper made an unbelievable save off of a shot that Vanessa DiBernardo took that I think we were all above the bench celebrating. It was headed for the upper corner and she made this unbelievable save,” Rayfield said.

Oklahoma scored the only goal of the game in the 25th minute, knocking Rayfield and her team out of the NCAA tournament.

“That game was an interesting game because it was a physical game,” Guerra said. “Even though it was a loss it felt like a win; we had such a great season.”

Rayfield’s reign in 2011 earned a record of most wins in one season, as well as many other accomplishments: 17 victories, a 12-game unbeaten run, Big Ten Coach of the Year, Midwest Region Coach of the Year and, of course, her second Big Ten title.

Panozzo proved in her first year as a starter, especially in the Big Ten Tournament, crucial to the team. Her 75 saves overall and 24 goals earned her Big Ten Defensive MVP and Big Ten All-Tournament Team.

Rayfield set her team for success since the beginning of the season, and it paid off for her as the team finished nationally ranked at No. 17.