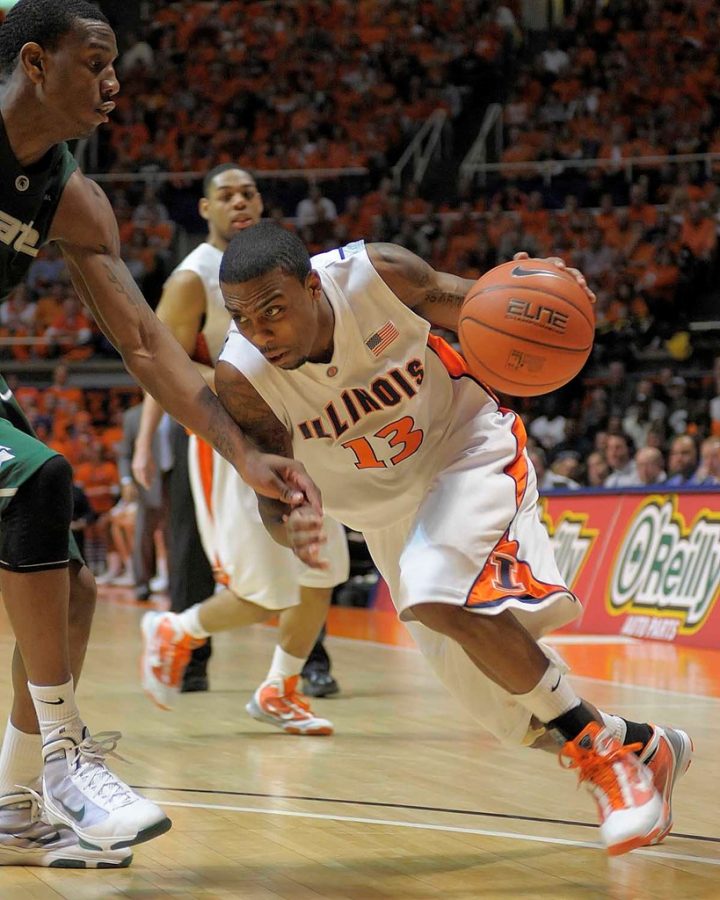 Junior Jeff Jordan presses forward towards the basket during the match against Michigan State on Feb. 6, 2010.

“The Last Dance” documentary series on ESPN has been about the only new content in the sports world lately, with two episodes of the 10-part series that showcase a behind-the-scenes look at the 1997-98 Chicago Bulls along with the career of Michael Jordan airing each Sunday night.

When most people think of Jordan’s affiliation to college basketball, his shot against Georgetown in the 1982 National Championship comes to mind. But Jordan’s last meaningful contribution to the college game, outside of his brand’s continued sponsorship of various schools across the country, actually came as a parent. His two sons, Jeffrey and Marcus, each played college basketball, with Jeffrey doing so at Illinois for three seasons from 2007-2010 before joining up with Marcus at Central Florida.

Naturally, having the son of arguably the most successful and influential athlete in world history on campus made for more than a few exciting stories, especially considering that his father would occasionally make his way down to the Urbana-Champaign area.

Former News-Gazette reporters Marcus Jackson, who now works in communications for Allstate, and Paul Klee, who writes for The Gazette in Colorado Springs, shared a few inside stories of both Jeffrey and Michael Jordan’s time within the Illini basketball program.

When it came to the younger Jordan, it was clear that expectations needed to be tempered in terms of replicating his father’s success on the court.

“Offensively, he played point,” Jackson said. “He could handle it a little bit, (but) wasn’t much of a scorer at the college level. He was a really good defender. He was athletic, a kind of in-your-face defender. He made life difficult for the guys he was guarding.”

“Not as much a scorer,” Klee said. “(Jeff) didn’t look for his offense as much. I wanna say he backed up (Demetri McCamey) at that time, very left-handed.”

Jordan averaged just 1.2 points per game over the course of his three years and never cracked more than 13.8 minutes per game as a bench player. During Jordan’s career with Illinois, the Illini floundered to a losing season his freshman year in 2008, made the NCAA Tournament in 2009, although they became victims of the dreaded 12-5 upset to Western Kentucky, before finishing out with an NIT run in 2010.

Jordan was not the main attraction on the Illini roster over the course of his time on campus, and he never carried himself as a bigger deal than he was, or as his last time would have entitled him to, earning plaudits from those that spent time around him.

“He got to know you,” Jackson said. “He’d call you by your first name, real conversational, really easy-going. He was just a regular kid for the most part. If you didn’t know any different, you wouldn’t know he was Michael Jordan’s son.”

“I remember, they were walking down the beach, I think it was in Honolulu, and I don’t think anybody realized that’s Michael Jordan’s kid,” Klee said. “There was nothing flashy about him. Unless you could recognize him, he was pretty much just another college student as far as most people were concerned.”

Though many children of celebrities may feel uncomfortable discussing their life growing up around their parents, especially with a dad as famous as Michael Jordan, Jeff was never shy to open up about the man that raised him.

“You would ask Jeff about Michael, and it never bothered him,” Jackson said. “You’d think he might get annoyed with it, obviously growing up with a famous father like that you get a lot of questions, (but) he was always generous and gracious when you asked about Michael.”

Though he wasn’t around Champaign all that frequently, Michael would occasionally make his way to Illinois practices and games, usually causing quite the stir.

It’s amazing to picture how this situation would have gone, had social media and smartphones been as prevalent back then as they are now.

“I just remember everyone kinda being in awe, everyone taking out their cameras, their phones or whatever it was they were using at the time to try to snap photos,” Jackson said. “Nobody could really get to him, so you couldn’t really walk up to him and ask for a picture, but (there) was definitely a lot of people yelling ‘I love you Michael!’ and cheering whenever he moved around.”

“Every eyeball in the building went right at M.J., every one of them,” Klee said. “I know the coaches tried to downplay it as much as they could so the guys wouldn’t get distracted by it. A couple weeks into the season it (wasn’t) as big of a deal to them when they’d seen him in Maui, (and) they’d seen him in practice a handful of times, (but) initially, it very much was a big deal. You could imagine, it (would be) like me hitting golf balls and Tiger Woods is standing behind me. I don’t know if you’d call it pressure, but you’re very aware of who that is.”

It wasn’t just fans that were in awe of Michael either. Even Illini standouts felt the pressure to play their best when the six-time NBA Champion came around.

“Brandon Paul, he was on the team at that time, and he told me he had played with the other Jordan son, Marcus, growing up, so he had seen Michael around a few times, but he still got nervous playing in front of Michael Jordan,” Jackson said.

Unlike nowadays, where the State Farm Center offers exclusive seating that would allow Jordan to watch his son’s game in peace, the only available option was the regular seating alongside fans.

Thinking about what might’ve been going through the heads of other Illini players’ parents sitting amongst the man they taught their kids to strive to be like on the court is certainly an interesting idea to ponder.

“Back then they didn’t have the suites like they do now, so Michael just sat in the bleachers right next to the team bench where the rest of the parents sat,” Jackson said. “He was just like any other parent, other than the fact that he had a couple of security guards blocking anyone from getting to him.”

One series of games that stood out in particular during Jeff’s time at Illinois was the 2007 Maui Invitational, where Illinois would end up going against a soon-to-be NBA all-star, along with Jordan’s arch rivals, who he still carried animosity for over 20 years later.

“One of the most memorable times was in Maui,” Klee said. “It probably would have been Jeff’s freshman year, and the Illini just had an awesome schedule at that point. They get Arizona State the first day, that’s James Harden. It’s James Harden’s college debut. He’s better than everybody else out there, it’s very clear, and everybody knew who he was and that he was gonna be a big deal. So you had M.J. and you had James Harden in that tiny little gym, and Michael watched that game. The next day, you get Illinois and Duke, which just on the surface is as good as it gets, and you also had the element of Mr. Carolina watching Duke. Now I’m sitting close enough to Michael to learn very clearly he still doesn’t like Duke at all. That rivalry is very much alive to Michael Jordan, just like you’ve seen with the Pistons and all those guys on ‘The Last Dance.’”

Though “The Last Dance” and countless other tales from his playing days paint Michael as the ultimate competitor as a player, his competitive desire didn’t travel as a parent — or it was very well hidden.

Michael was much more likely to crack a joke with his son than berate or criticize him, his teammates or the coaching staff.

“There was one time where Michael came down to a practice and he was watching a little bit,” Jackson said. “Afterwards, you see them, they were chatting a little bit and Michael was playfully teasing Jeff, telling him he would be better if Jeff wasn’t partying as much as he was.”

“(Former Illini player and assistant coach Jerrance Howard) was kinda the liaison there,” Klee said. “He’d sit with Michael and I in the stands. (Former Illinois assistant coach) Wayne McClain was a big part of that too. I remember asking Mike how his drive was and he said a ‘good two-cigar trip.’”

“He was hands off, he really was,” Klee said. “He let (the coaches) do their thing. He asked me, that first practice, which coaches were which, but there really wasn’t any kind of a heavy hand or ‘they should be doing this or that.’ I’d say probably the most animated he (got) was during that Duke game. He really wanted to beat Duke that day. That was probably the loudest that he was.”

Though Jeff was always humble and friendly when it came to handling the media, he was known to show off the advantages of being Michael Jordan’s son every now and then.

It wasn’t uncommon to see the younger Jordan pull out of a specially-customized car wearing some never-before-seen Jordan gear. In today’s extremely vicious and theft-ridden sneaker and streetwear reselling market, Jeff might have needed to be a little more careful showing off his drip if he were on the Illini team currently.

“Not in games, he wore the team shoes for that,” Jackson said. “But he would show up to practices, or even in pregame, and he usually had on some Jordans that people might not have even seen. Definitely some gear (like) jackets and sweatpants. I know he drove a Range Rover, and he had the Jordan logo stitched into the headrest.”

It’s clear through watching numerous pieces, including “The Last Dance,” on Michael’s personal life that golf (along with gambling) pretty much ruled his downtime, and Michael found ways to balance his tee-times with being there for his son while Jeff was at Illinois.

“He was very into the games, watching intently, and just with about a minute left in the game, he quietly exited (and) (went to) play island golf somewhere,” Klee said. “It was Jeff’s Birthday when he was out there (in Maui), so Jordan shows up to the team hotel and all Jeff’s teammates get a big kick out of that. He meets them all shakes their hands and they loved that, especially the Illinois guys.”

Though his tenure as an Illini parent was the tiniest of blips on the radar of his time around the game of basketball, it’s a testament to Michael Jordan’s greatness that stories about him doing even the most mundane and normal fatherly activities can still generate such excitement to anyone lucky enough to have been around him.