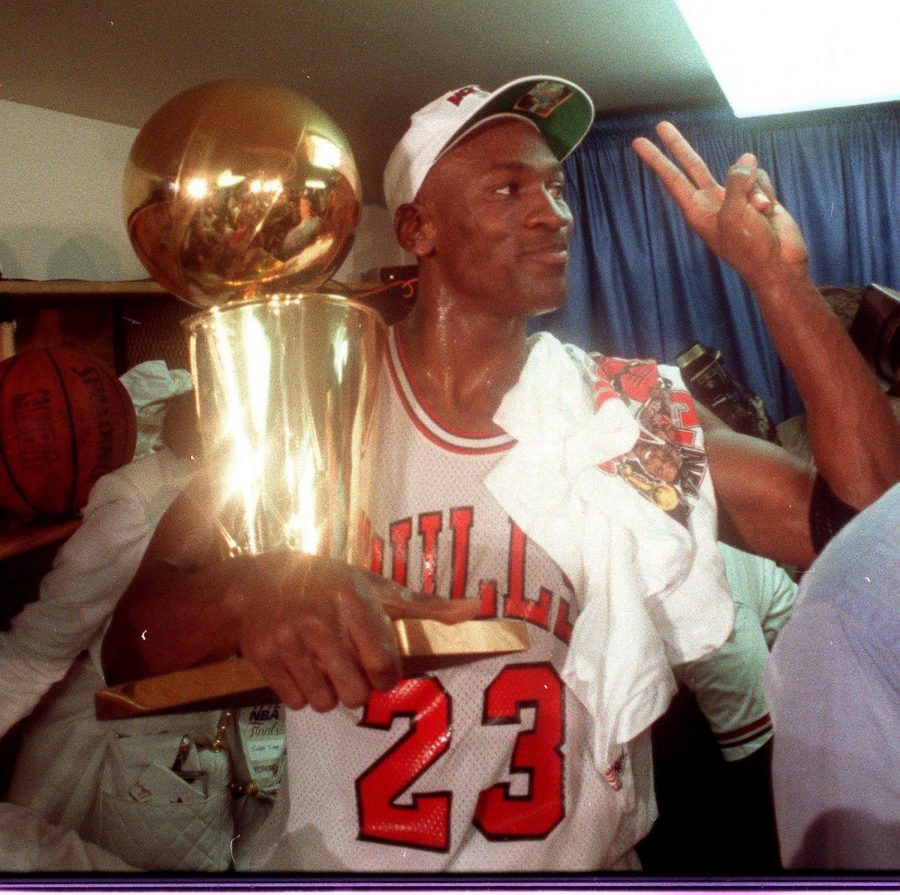 Michael Jordan holds onto the NBA Championship trophy after the Bulls won their second straight title on June 14, 1992.

We’ve hit one of the saddest sports moments in the last month — ESPN’s “The Last Dance” is nearing its end. On Sunday, episodes 7 and 8 aired, leaving just two episodes left in the highly anticipated and highly watched documentary series.

Episode 7 began and ended with a lot of emotion, starting with the death of Michael Jordan’s father and finishing with tears welling in Jordan’s eyes as he talked about the attitude and persona that came with winning. The episode detailed how Jordan coped with the loss of his dad, a monumental figure in his life, which he did by retiring from the NBA in 1993 and pursuing an MLB career with the Chicago White Sox. We also saw the kind of teammate Jordan was — intense, sometimes over-the-line mean, but motivated.

The eighth episode brought the famous “I’m back.” fax Jordan sent after deciding to quit baseball and return to the Bulls. That following season brought more emotions from Jordan, as he wore No. 45 instead of No. 23 in his first game back because he didn’t want to play in his original number if his dad wasn’t there to watch it. Losing to the Orlando Magic and Horace Grant in 1995 re-ignited Jordan’s energy and continued to fuel his competitive fire, ultimately leading to the historic and best team in NBA history — the 1995-1996 Bulls season, which included a title win on Father’s Day.

Several of us on The Daily Illini sports staff continued to react and record some memorable moments from episodes 7 and 8 of “The Last Dance.”

As a journalist, I was disappointed by episode 7, not because of the actual episode or anything pertaining to ESPN’s production, but because of what I saw from past journalists. Watching news outlets try to link one of, if not the most horrific event in Jordan’s life, to his extracurricular activities with no evidence was disturbing. For the media to chase the storyline of Jordan retiring in 1993 because of a supposed 18-month suspension for gambling, I was left contemplating what Jordan’s career meant to the media. Yeah, it’s the media’s job to investigate speculation and possible breaking news, but to continuously try and change the narrative of Jordan’s actions and his career was disappointing.

On a different note, these two episodes might have been my favorite. The pure competitive nature, the need to win, the unwillingness to accept anything less than the best, to the point where he was almost in tears, is such a beautiful thing to watch. Any person — Horace Grant, George Karl, Nick Anderson, BJ Armstrong — who doubted Jordan or took away his fire, became the enemy. Jordan wasn’t a ‘nice guy’ on the court, and that should have been and still should be OK. He was always there to play basketball and win, not to become a public figure; that just came with greatness.

I can’t stop thinking about this quote by Jordan: “When people see this they’re going to say ‘well, he wasn’t really a nice guy, he may have been a tyrant,’ but that’s you. Because you’ve never won anything.” The phrase ‘nice guys finish last’ is true. If Jordan was nice to all his teammates and coaches and opponents or even himself, he wouldn’t be the best player to ever play basketball. He and the Bulls wouldn’t have six NBA titles, and I can’t find a way to argue against that.

With only one week of “The Last Dance” left, I’m not sure I’m prepared to cope without the documentary. Already over 60 days without American sports, and it has been brutal for me. “The Last Dance” has been a nice escape from reality. Instead of pre-mourning the end, let’s talk about episode 7 and 8. These episodes featured Michael Jordan retiring and unretiring from basketball, playing baseball and a Bulls team without Jordan for the first time in nine years.

I love hearing about NBA players’ secret offseason pickup games. Nowadays, with videos all over YouTube and Instagram, these games aren’t so secret.  Back in the day, however, these games weren’t learned of until years down the road. Hearing Michael Jordan and Reggie Miller talk about the pickup games at Warner Brothers Studios piques my interest. What I would give to be a fly on the wall during those summer games.

The whole Scottie Pippen sitting down saga surprised me. It’s not just the fact Pippen refused to go back in during Game 3 of the 1993 Eastern Conference Finals a la Dan Scott, but how the team reacted after that shook me. This feeling of betrayal that culminated with Bill Cartwright’s emotional post-game speech showed the rest of the Bulls felt quit on. Throw in the fact that Phil Jackson rightly called a play for Toni Kukoc, and I still don’t entirely understand how the Bulls recovered in the series and the future.

Man, ESPN continues to outdo itself every week. When I was texting my friend during the episodes, he talked about how well ESPN tied these two episodes together. How they started the seventh episode with the tragic story of his father’s murder and ended the eighth episode with the Bull’s winning their fourth championship on Father’s Day.

I think the craziest story in all of sports might be Jordan’s return and how he helped a struggling Bulls team get slightly back on track. Seven days into his return, he hit a game-winning shot. Five games into his return, he scored 55. I don’t know if anybody could take a year and a half off NBA level basketball and come back and have only slightly regressed.

Lastly, the way they ended the seventh episode was a justification of Jordan’s reputation as a teammate. As much as Jordan wanted to win for himself, he also wanted to win for everyone in a Bulls uniform. I’m sure if you ask anyone on the Bulls in the 1990s, they’d look back on Jordan’s win at all cost nature as necessary to their success.

The only thing that is guaranteed is every Sunday after next week will feel very empty.

Michael Jordan’s father’s prediction in the opening scene of Space Jam was not far off from the real-life exploits of post-baseball MJ. This week’s episodes of “The Last Dance” showed us how Jordan’s excellence and popularity extended not only to basketball but to America’s pastime as well. Despite a brief and somewhat lackluster career with a White Sox minor-league affiliate, Jordan’s intensity and drive to win followed him from the basketball court to the baseball diamond. What makes his foray into baseball even more commendable is that he was inspired by his late father to drop the sport in which he was so dominant to pick up a new one with virtually no experience at even a semi-pro level.

However, this week’s episodes best served to further demonstrate just how mighty the Bulls were during their heyday, even through most of their time without Michael Jordan. The 72-10 Bulls truly were the best team in the history of the NBA, and their postseason mantra rings true to any arguments that fans of a team-that-will-remain-nameless often push: It don’t mean a thing without the ring. But this week’s most powerful moment did not come in the form of basketball brilliance. It came when the show was able to crack the often-sullen exterior of the mighty MJ to show his true humanity following his father’s passing. The final moments of episode 7, which showed Jordan calling for a filming break as his emotions broke through, provided a look at a side of Jordan rarely seen even throughout the series. These flashes of emotion show us that through all of his years in the public eye as likely the most popular man in the world, he never forgot who made him who he was: his family.

As much as I love all sports, my favorite sport is easily baseball. So when episode 7 of “The Last Dance” spent time focusing on Jordan’s baseball career, I kind of had a geek-out moment. One of my favorite 30-for-30 films is “Jordan Rides the Bus,” which is a longer documentary about Jordan’s season with the Chicago White Sox double-A affiliate.

When “The Last Dance” focused on Jordan’s brief season in Double-A, it became clear Jordan had the ability to play baseball at a high level. I have my doubts about the chance he would have made it to the big leagues, but considering he had a .202 batting average and 50 RBIs, you have to be impressed. A further dive into Jordan’s numbers with the Barons shows he had an RBI in every eight at-bats. To put that into perspective, current Los Angeles Dodgers star outfielder Mookie Betts averages an RBI every seven at-bats. Now, don’t let that fool you. A .202 batting average, three home runs and 50 RBIs is by no means a world-class season, but Jordan hadn’t played baseball at a high level ever before in his life, so to post numbers like that is fairly impressive. Ultimately, Jordan ended back on the hardwood where he really belonged, and he seemed to pick up right where he left off.

Through the first eight episodes of “The Last Dance,” there is only one complaint I have and that is the picture Scottie Pippen has been placed in. It made the migraine not sound real and it made Pippen look like he quit on the Bulls. The Bulls don’t win as many championships, or any championships, without Pippen. Hopefully, the final two episodes paint Pippen in a better light.

You never know how someone’s going to take a death in the family, especially when it’s your father and best friend. Michael Jordan, with all the weight of being a global superstar taking its toll on him, decided to retire and pursue a career in baseball. He could have used it as fuel for a fourth consecutive championship, but instead wanted to do what made him and his late father happy.

I think the media was unfairly criticized and portrayed too negatively when speculating about what led up to his father’s death. It was a fair question, in my opinion, about whether his father was murdered because of a gambling debt. We all saw in an earlier episode how unbelievable his press conference addressing his gambling “hobby” was. At the time it surely wasn’t impossible that that “hobby” could have had dire consequences. Now as people you want to have empathy and give others some space, but the world is full of atrocities and can be uncomfortable at times. It’s dangerous as the media to stop pushing the envelope and to halt your curiosity. One of the most important jobs of the media is to always ask questions.

Jordan took too much flak for his leadership style. It may have been harsh and unreasonable at times, but it resulted in championships and if it works, why stop now. He pushed his teammates, but he just wanted to prepare them for when the games really counted. It’s the ideal of every team for practice to be just as tough, if not tougher, than the games. That’s when the fun really begins.