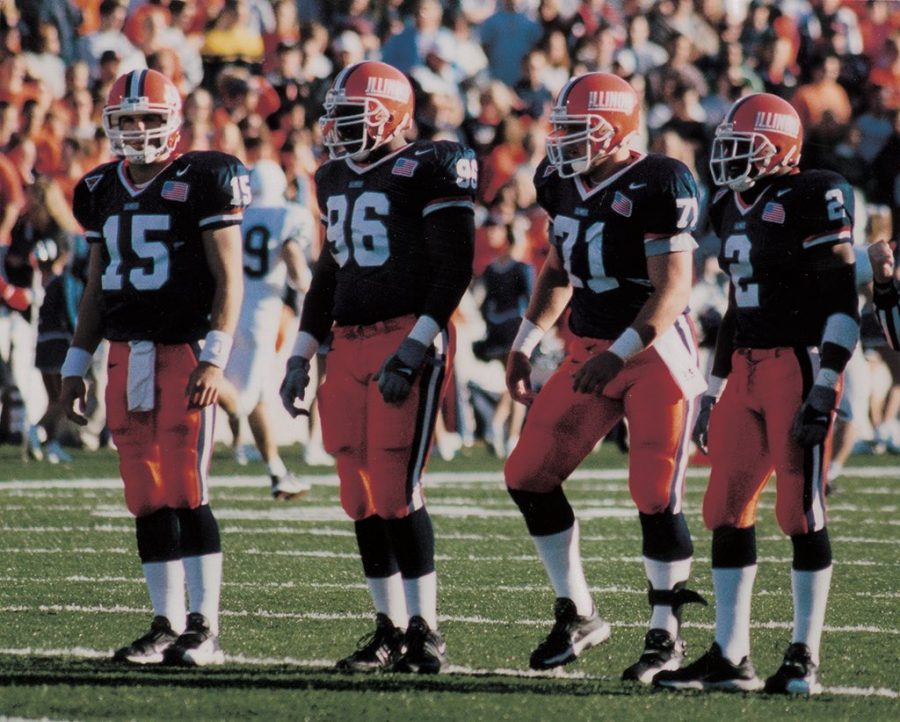 The Illinois offensive line stands on the field before a play during the 2001 season.

Let’s start in 1997, four seasons prior to the historic 2001 season. The 1997 season was Ron Turner’s first as the head coach of the Illini. Turner took over for Lou Tepper, who had been the head coach from 1991-96. In 1996, Tepper’s Illini squad finished with a 2-9 record, and it was time for the Illini to look for a new leader.

In 1997, Turner was hired as the head coach, but his first season at the helm didn’t bring much hope to Illini fans. Illinois went 0-11 in 1997, having opponents outscore the Illini by a combined score of 368-119.

Future quarterback Kurt Kittner and the rest of the graduating seniors in 2001 believed in Turner’s vision enough to sign with the Illini despite one of the worst seasons in Illinois history.

Move forward to 1998, Kittner’s freshman season in Champaign-Urbana. Turner gets his first win as Illinois’ head coach against Middle Tennessee State in week two and his first Big Ten win against Northwestern. Turner’s squad improves to 3-8.

Finally, we are in 1999, the year things really begin to click for Turner’s program in Champaign. Illinois finishes with an 8-4 record, with wins coming over ranked Michigan and Ohio State teams and ending the season ranked No. 24 in the country after beating Virginia in the Micron PC Bowl in Miami.

Fast forward to 2000; Illinois has the highest expectations they have had in a long time, starting the season ranked No. 21 in AP Poll, but the 2000 season gets derailed by injuries. Star sophomore wide receiver Brandon Lloyd broke his femur and Kittner is forced to play through an injury. Illinois falls one win short of back-to-back bowl game appearances for the first time since the 1991 and 1992 seasons.

The calendar is officially 2001 and the expectations among the players heading into a critical year for the future of Illini football are high.

The story of the 2001 Illinois football team can’t begin without the summer prior to the season. The 2001 summer was one of the most difficult summers Illinois players had faced in their time. Head strength coach Jim Zielinski had players push and pull weights they had never lifted before while also doing conditioning exercises that pushed players to the brink.

One day per week was different. Wednesday. Wednesday was softball day. The 2001 Illini football, led by the senior captains, broke the entire roster into teams and played in a softball league on Wednesdays.

The softball teams and the handwork in the weight room led to a group that was closer than any other group many had been a part of.

“As far as closeness, I have never been around a team that was as close as we were that year,” said Luke Butkus, offensive lineman and team leader.

The Illini opened their season with a convincing 44-17 road win over University of California, Berkeley. The next week, Illinois’ offense struggled against Northern Illinois until Turner dialed up “Big Play Brandon.”

Illinois’ offense had been struggling to gain momentum, so Turner told Kittner to throw it to Lloyd in an effort to generate a spark. Kittner followed the instruction from his head coach, and Lloyd came down with a 40-yard catch in double coverage, sparking the offense.

Kittner had more trust in Lloyd because of his “great hands” and his “knack for coming down with the ball.” Kittner to “Big Play Brandon” became a theme as the season progressed.

Illinois improved to 2-0 after their 17-12 victory over Northern Illinois. Three days later, the world stopped.

The horrible terrorist attacks on Sept. 11, 2001 raised questions about how safe it was to continue playing sports. Kittner remembers getting ready to leave his campus residence after the first plane crashed into World Trade Center’s North Tower, but he didn’t get off the couch for the next eight hours as he continued to watch the news.

Eventually, it was determined to be safe to continue playing football, and after an unexpected bye week, Illinois welcomed No. 25 Louisville to Champaign. Illinois blitzed the Cardinals to a powerful 34-10 win to improve to 3-0.

After a setback against Michigan on Sept. 29, Illinois moved to 3-1 but fell out of the top-25 after a brief one-week appearance.

After the loss to Michigan, Illinois rattled off back-to-back wins against Minnesota and Indiana to improve to 5-1 before a matchup with Barry Alvarez and Wisconsin at Memorial Stadium.

Illinois hadn’t beaten Wisconsin since 1993, though they felt they had a good chance against a 4-3 Wisconsin team that was coming off a road win at No. 20 Ohio State.

Kittner and Lloyd had one of their best days against the Badgers defense. Kittner posted 401 yards and four touchdown passes, and Lloyd was on the receiving end of 129 yards and one touchdown, none more memorable than a toe tap in the south end zone at Memorial Stadium.

However, Lloyd didn’t want to be on the field. Lloyd began to experience cramping and wanted to come out of the game. Turner wasn’t having it.

“I knew we needed him, and I told him, ‘get your ass back in there and we are throwing you the damn ball, so get in there,’” Turner said.

Lloyd, who was known for his swagger and occasionally received unsportsmanlike conduct penalties, says he was too tired to celebrate what would become a game-winning touchdown.

Illinois followed up the emotional win against Wisconsin with a 38-13 thumping of No. 20 Purdue in West Lafayette, Indiana to improve to 7-1.

Another turning point came during a home night game against Penn State. The Illini needed another fourth-quarter drive to come back and clinch a victory. Running back Rocky Harvey powered into the end zone with less than 1:20 left to give the Illini a 33-28 victory over Joe Paterno’s Nittany Lions.

Illinois moved to 9-1 with their sixth consecutive win at Ohio State, claiming the Illibuck for the second time in three years. They also had won back-to-back games at The Horseshoe for the first time since the 1990 and 1992 seasons.

The final regular-season game of the year was played on Thanksgiving at Memorial Stadium against Northwestern.

Running back Carey Davis had been thrown into more of a feature back role due to injuries at the position, but he stepped in smoothly, rushing for 79 yards on 24 attempts, but Kittner stole the show in his final home game as an Illini. Kittner went 33 for 43, 387 yards and four touchdowns, leading Illinois to a 34-28 victory, getting revenge on their rivals from 2000 when the Wildcats cruised past the Illini, 61-23.

Illinois clinched the Big Ten Championship that afternoon and the Sweet Sioux Tomahawk, an unforgettable experience for Butkus.

“To be a part of Illinois football my entire life, to be able to watch the games as a kid and then win a Big Ten Championship is something I will never forget,” Butkus said.

Traditionally, winning the Big Ten slots a team into the Rose Bowl, but the 2002 Rose Bowl was the host for the National Championship game between Miami (Fla.) and Nebraska, so Illinois accepted an invite to the Sugar Bowl in New Orleans against Nick Saban’s Louisiana State Tigers.

After six weeks off, Illinois entered New Year’s Day at the Superdome against LSU. New Orleans is less than 85 miles from Baton Rouge, making the Sugar Bowl a virtual home game for LSU.

“That was the loudest game I have ever played in. My ears were ringing for three days after that game,” Lloyd said.

Illinois struggled in the first half against LSU but fought back in the second half. LSU’s offense was too much for Illinois’ defense though. LSU won 47-34, ending the Illini’s season on a sour note.

Despite the loss, Davis looks back on the Sugar Bowl fondly.

“It was one of the coolest experiences in football, just being selected for the Sugar Bowl and going down to New Orleans and getting a chance to see the city,” Davis said.

The 2001 Illinois football team accomplished something no Illinois team has done since — win the Big Ten and 10 games. Illinois set countless records that season, but one thing stands taller: the Big Ten Championship trophy. Nothing means more to the team’s greatest leader, Kittner.

“I don’t care about any of the records; I care about winning the Big Ten Championship,” Kittner said. “That is something that doesn’t happen very often at Illinois. I am very proud of everyone that was part of it that made it happen. That is my favorite season I have ever played in my life, in any sport. Behind marrying (my) wife and the birth of my kids, it is my third best accomplishment. I look forward to that happening again, hopefully soon, at Illinois.”