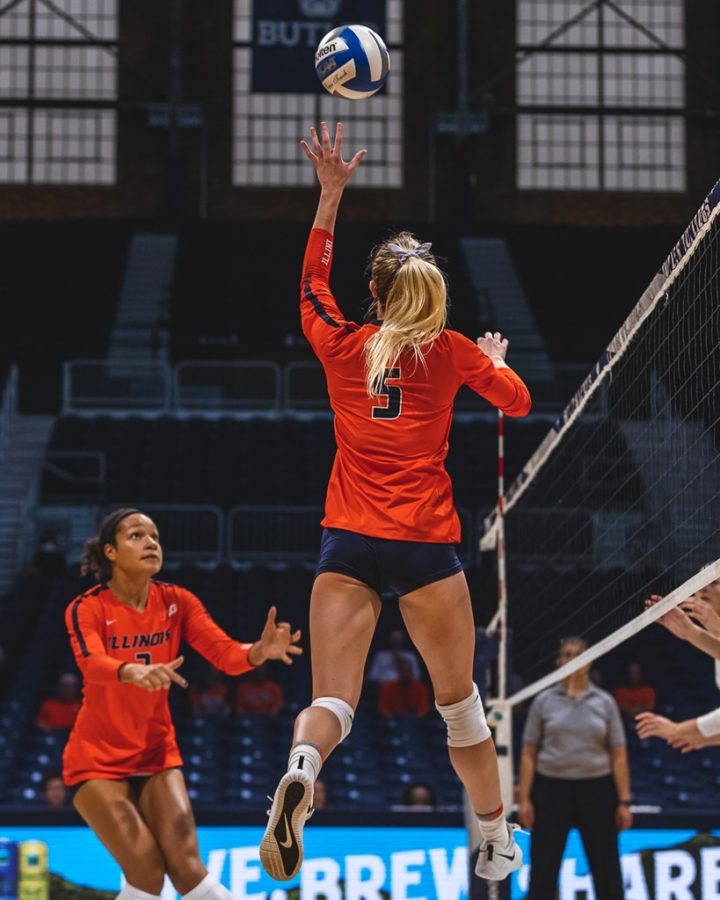 Junior Kylie Bruder sets the ball during the match against Loyola Marymount on Sept. 21, 2019.

Any Illini fan that has ever been to an Illinois volleyball game at Huff Hall knows how great the atmosphere is. At full capacity, Huff Hall is aggressively loud, and combined with when the fans all come in the same color, the home-court advantage Huff Hall gives has to be great. The aesthetic of the gym is always topped off by the uniforms the athletes wear when they enter the gym to the erupting fan applause.

This season, the NCAA tournament Illinois volleyball team sported four different uniform combinations against their opponents, and it is my job to rank them. I will be ranking the uniforms based on what the majority of the team wears and not the alternate libero jerseys.

One of my favorite times of the sports year is October because it is a time many teams wear pink and usually help raise money for Breast Cancer Awareness month. The Illini had their annual pink night on Oct. 26 last season, and they brought out their white jerseys with pink forearm sleeves. They are great jerseys but would be higher if they had more pink. Being home jerseys, it’s hard to squeeze in more, but the team wearing the all pink ones that are worn by the libero would have them ranked higher.

The navy blue jerseys, which are usually worn as the away jerseys, are simple but effective. Darker jerseys tend to be my favorite, as they are sometimes intimidating, and the orange stripe down the arm adds the contrast and pop of color the jerseys really need. The thing keeping these jerseys out of the top two is that they are a little simple and the top two are just that good.

These are a big step up from the 2018 white jerseys that featured a white base with orange forearms. The 2019 white home jerseys are mostly white with the stripe going down the arm, starting off as blue on the shoulder and turning orange on the forearm. The change is very subtle but makes for a really cool look, not to mention how clean and bright the base of the white jerseys is. All in all, the jerseys make for a really clean look that has the pop of color in their numbers and forearms.

Who can deny the Illini orange? The orange jerseys were used as the alternates, so both Illini fans and opposing arenas got to see these ones. What can I say? They are bright and lively, and when they are worn at Huff Hall, the orange just resonates with the fan base so much more. The jerseys are topped off with the blue stripe down the arm, and the blue numbers that are trimmed in white make them pop so much more.