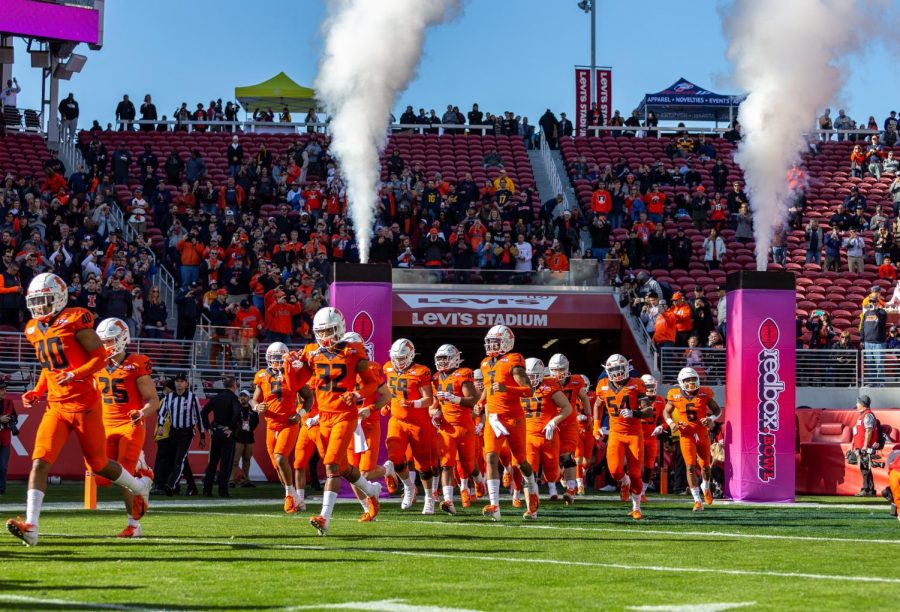 The Illini football team run out onto Levi's Stadium for the Redbox Bowl in California on Dec. 30.

Illinois football was active in the recruiting world on Thursday with a pair of new commitments.

The first, Trevor Moffitt, from Bushnell (Fla.), is a 6-foot-2, 190-pound linebacker in the 2021 class. Moffitt is slightly undersized, in terms of weight, to play linebacker at the Big Ten level, but he makes up for his lack of size with his length, speed and outstanding athleticism. As a junior Moffitt posted 110 tackles, 22 tackles for a loss, 11 sacks and four forced fumbles.

According to 247Sports, Moffitt wanted to visit Champaign in the spring but was unable to visit campus due to the COVID-19 pandemic.

Moffitt is just the third member of the Illini’s 2021 recruiting class, joining Texas quarterback Samari Collier and Georgia defensive back Prince Green. Even with Moffitt’s commitment on Thursday, Illinois still has the least amount of high school commitments in the 2021 class among all Big Ten schools. Indiana has five commitments, the second least amount in the conference.

Smith redshirted at Louisville, but in his two years on the field, he posted 70 tackles.

Smith joins a group of defensive backs headlined by senior cornerback Nate Hobbs and safety Sydney Brown. Entering the 2020 season, Illinois is expecting production from former top-100 corner Marquez Beason, who is rehabbing a torn ACL which caused him to miss his entire freshman season. Illinois also has Tony Adams, who has played both corner and safety in his time at Illinois.

Smith projects to compete for the second safety spot, next to Brown entering the 2020 season, after the graduation of Stanley Green. Smith’s main competition is former Miami (Fla.) transfer Derrick Smith, originally recruited as a linebacker, and rising junior Delano Ware, who has also received opportunities at linebacker and safety.

At the very least, Smith adds depth to an Illini back seven, which could be one of the better secondary groups in the Big Ten, if healthy. He should also allow Illinois to better play matchups against opponents who have threatening slot receivers and tight ends.