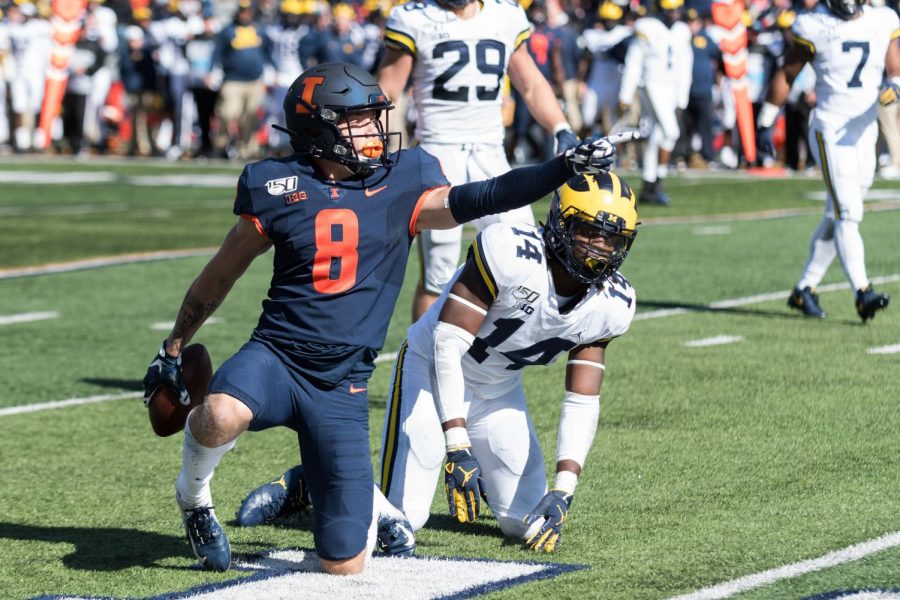 Illinois freshman wide receiver Casey Washington celebrates a first down during the game against Michigan on Saturday, Oct. 12. The Illini lost 25-42.

Editors note: A previous version featured a picture that incorrectly identified the player. We have since changed the image. The Daily Illini regrets this error.

Every year, the University of Illinois Division of Intercollegiate Athletics honors several student athletes and teams with the Oskee Awards. Among the four major awards is the Freshmen of the Year honors, which feature one male and one female winner.

“I was definitely excited to be a part of that especially with those guys, the other nominees; they’re great guys,” Washington said. “I wasn’t really surprised but I’m definitely thankful for it. But, I just feel like I haven’t done anything yet. I’ve got work to do and hopefully put up the numbers next year.”

As a true freshman, Washington played in 10 games and started in five during the 2019 football season. He became just the 14th true freshman receiver in the program’s history to start in multiple games. Washington finished his first season with 11 catches for 132 yards.

To Washington, that award wasn’t his to win. He feels he hasn’t done anything yet. But that time is coming soon.

“This next year, whenever we get back to playing sports, has to be my year,” Washington said. “I don’t really have goals that I put up, I just know that this year has to be the year I turn necks and I do what I do and do it at a high level.”

That breakout season won’t come easy, though. With now-healthy senior receivers Josh Immatorbhebhe, Ricky Smalling and Trevon Sidney, who all faced injuries last season, back in the lineup, Washington will have to work that much harder to keep his starting position.

For Washington, that work isn’t necessarily on the field or in the gym, but in his head. Coming from a high school system that didn’t pass much, Hayes-Stoker believes Washington needs extra time to develop his off-the-field skills.

“He’s just got to get smarter in how he plays,” Hayes-Stoker said. “He plays so hard. He plays very hard. That’s why his nickname is ‘Wildman,’ because he goes all out. He leaves nothing in the tank, he’s always going to empty it out. He needs to know when to use all of his juice and when to save some. He’s just got to learn how to tempo himself, and he’s got to do a better job of reading coverages, coverage recognition, and having a plan of what he wants to do with his route. But, that’s going to come with experience and that’s going to come with reps, development, teaching and him applying himself.”

Luckily, some of that on-field experience in 2019 has pushed Washington past the initial growing pains every freshman faces.

Coming up from an underdeveloped high school program to not just Division I level but Big Ten level is a daunting jump for any player. While Washington initially got a consistent starting position due to injuries, Hayes-Stoker believes that early experience will be vital to Washington’s future.

“It was great because he got the feel of the game,” Hayes-Stoker said. “He went out there against Cal and now he has something to prove because I don’t like the way he played against Cal. And he knows that. And now he’s seen, OK, he’s had some successes. He’s also had some challenges that he has to rise up for. In that bowl game, he’s seen the competition level will be increasingly getting better as the season progresses. But this is going to be invaluable experiences for him because now he’s been there. He’s played in the bowl, he’s seen that so he kind of knows what to expect, and he’ll know how to prepare himself to attack that moving forward.”

For Washington, there is still a lot of room for improvement in his mental game, something he has been working on since leaving campus in March.

“I definitely want to get bigger and faster because that’s just a part of developing as a man and getting older, but I think personally my main struggle was the IQ part of the game,” Washington said. “Like actually what’s happening during the game. Really for me, and I’m still working on it to this day, is really becoming a student of the game.”

A lot of that growth has come from putting in work during team and individual film sessions and Zoom meetings.

In high school, Washington said film sessions were generally focused on what the individual player did right or wrong during a game. In college, film sessions are much more intense and detail-oriented.

“In college, it’s more technical and it’s broken down to every little detail,” Washington said. “It’s just a different setup. It was hard for me to adjust and I’m still adjusting, but I think I’m going to get there, I’m definitely going to get there. It’s fun to see in myself that I’m growing as a player and as a student of the game.”

Washington has continued to grow in recent months while back home in Texas, whether it be getting in fieldwork with his old high school quarterback, attending weekly Zoom meetings with coaches and teammates or following the workout plans provided by strength coaches.

“I think if anybody’s benefited from these Zoom meetings, it’s been him,” Hayes-Stoker said. “That’s where you wouldn’t have as much time to go to the field together, he’s been able to study more and spend more time watching film in those meetings. He needs to continue right now on his own while we can’t meet with him.”

When it comes to keeping that mental game sharp, Washington has been leaning on his teammates for extra motivation and a sense of normality. The team has a group chat where they send each other different workouts or drills they’ve been doing on their own. Strength and conditioning coach Lou Hernandez also showed individual workout videos in a team meeting. According to Hayes-Stoker, about 60% of the videos were sent in by receivers.

For Washington, seeing all those videos has encouraged him to not only keep the team’s goals for next season in mind but “stay on (his) grind.”

“During these times is when you can really reflect on yourself,” Washington said. “You can reflect and really think of where you want to be in the future as far as my goals in life and in football. Right now it sucks and there’s no structure, but really for me, I’ve been trying to keep my eye on the prize and just grind it out until we go back.”