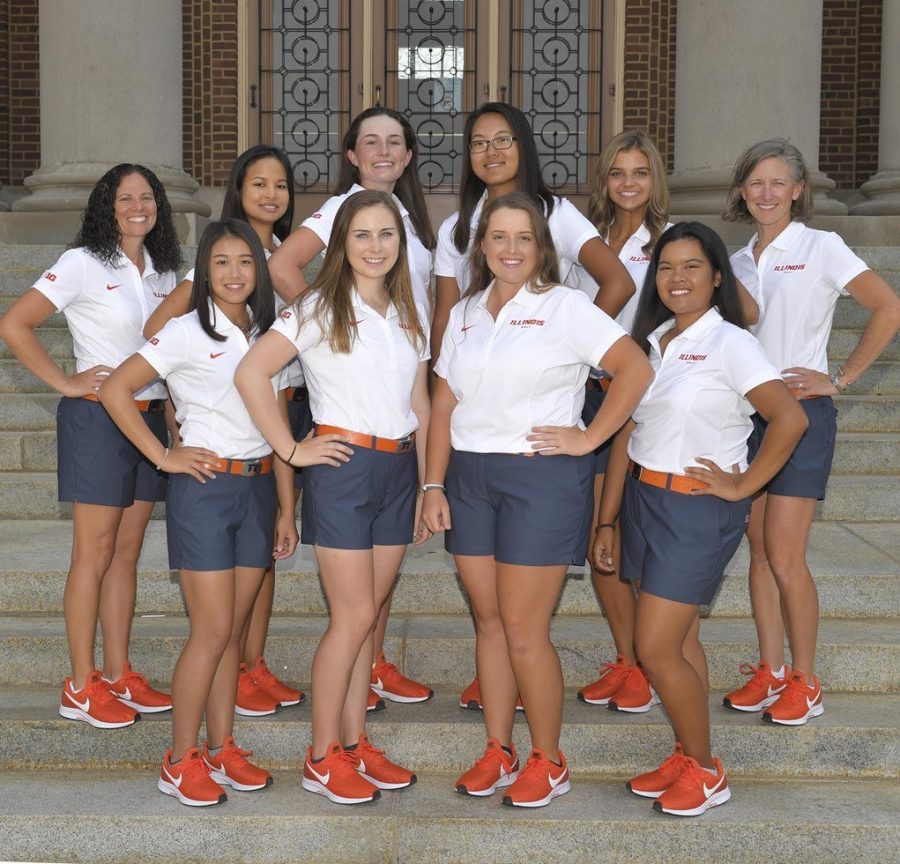 Throughout the 21st century, the Illinois women’s golf team has started to achieve more and more success. Top finishes in invites and Big Ten tournaments have been part of some of their achievements, but one team won more than the rest. The 2018-19 team won three invites and made it to the NCAA Championships, finishing tied for ninth in the country.

In the fall 2018 season, the Illini achieved success from the beginning. They started off their season in Knoxville, Tennessee, where they competed in the Mercedes Benz Collegiate and finished tied for third out of 17 teams. They won the very next meet which was the Coeur D’Alene Resort Collegiate. The ladies defeated 17 other teams, and then-freshman Crystal Wang finished tied for third individually.

After the first-place finish, some teams slowed down, but not this Illini squad. They finished third of 15 teams at the Illini Women’s Invitational at Medinah, and two weeks later won their second invite of the season. Illinois traveled to Simpsonville, Kentucky, and defeated 14 other teams to win the Cardinal Cup. Then-junior Tristyn Nowlin dominated the field, winning the invite by six strokes over the next best finisher, Bing Singhsumalee, who was a senior for the Illini.

Illinois finished its fall season by traveling to Dallas, Texas, to compete in the Trinity Forest Invitational. They picked up right where they left off and won the invite over 11 other teams. Singhsumalee, Wang and then-freshman Kornkamol Sukaree finished second, third and fourth individually, respectively. This was Illinois’ third invite win of the season and finished the fall on the highest note possible.

After a near two-and-a-half month break between seasons, the Illini had trouble picking up in the same spot. At the UCF Challenge in Orlando, Florida, the Illini finished 14th of 16 teams. Despite placing third of 16 at the Westbrook Invitational the following week, they struggled again at the Briar’s Creek Invitational, placing 11th out of 17 teams.

With only two weeks left before the Big Ten Championships, Illinois started to get close to where they were in the fall. The Illini placed fourth out of 18 teams at the Clemson Invitational in Sunset, South Carolina, where Sukaree was Illinois’ highest finisher at tied for eighth individually. The ladies also finished fourth of 18 in their following competition at the Lady Buckeye Invitational, with Singhsumalee finishing third overall individually.

Part of what made this team so good was their well-balanced group of golfers. Five different Illini finished first for the team individually throughout the season, and there was not one clear top athlete. If one person had a bad day, they had plenty of teammates to rely on to step up and lead the team.

At the Big Ten Championships in Maineville, Ohio, the Illini were on their A-game. Losing only to the champion Ohio State Buckeyes, Illinois placed tied for second with Indiana. Wang and Sukaree led the Illini, tying for eighth individually at the meet. Singhsumalee and Nowlin were right behind, tying for 11th.

At the NCAA East Lansing Regional, the Illini did enough to qualify for the NCAA Championships. They placed fifth of 18 teams, with Sukaree once again leading the way. She finished tied for sixth individually, with Nowlin second for Illinois at 10th overall.

Having earned their first NCAA Championships bid in team history, the Illini came ready to compete. Traveling down to Fayetteville, Arkansas, for the championships, Illinois golfed well and was able to finish tied for ninth out of the 27 teams competing. Sukaree finished tied for 19th individually, while Wang tied for 23rd.

The tie for ninth place is the best finish in team history, and since it was just two seasons ago foreshadows success for Illinois teams in the coming years. Head coach Renee Slone had a very talented group of golfers that won three invites and finished top five in all of their matches other than three, including the postseason.