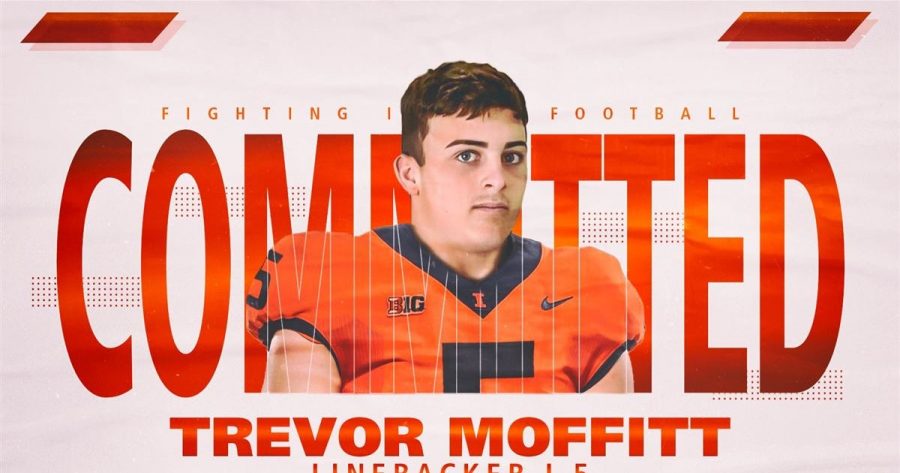 Moffitt is 6 feet 2 inches tall and weighs around 195 pounds, which is slightly undersized compared to most Big Ten linebackers. However, Illinois head coach Lovie Smith is interested in developing a “new age” of linebackers with top-notch speed and athleticism. Moffitt brings both qualities, evident by his 4.4-second 40-yard dash and flashy slam dunks on the basketball court.

Moffitt says the relationship he has with the Illini coaching staff is what really sold him to join Illinois’ 2021 recruiting class.

“They were the only Power Five (school) to offer (me),” Moffitt said. “They really saw something in me, and that means a lot to me; to be wanted is everything.”

Since the COVID-19 pandemic has taken over the globe, the NCAA shut down recruiting visits across the country, moving to a virtual recruiting world.

Moffitt has not been able to visit Champaign-Urbana in person, but he was able to take a virtual tour of Illinois’ new $80 million facility, which opened in August 2019.

“Their facility is just insane, it’s very nice. It is top of the line. When you look at their facility, it is something that will prepare you for the next level,” Moffitt said.

Moffitt wants to get up to 215 pounds before arriving in Champaign, which he thinks is a reasonable goal to accomplish. The 215-pound goal is the weight Illinois coaches want him to get to. Moffitt believes if he gets to that weight, then he can contribute to his freshman season for Illinois.

Illinois was able to get a head start in Moffitt’s recruiting because Moffitt’s father played linebacker at South Florida when current Illinois offensive coordinator Rod Smith was with the Bulls. The relationship made the Moffitt family feel comfortable sending their son to Illinois.

A quick look at Moffitt’s film shows he is a hard-hitting linebacker who plays each snap to the max level. Moffitt says playing as hard as he does represents the “chip on his shoulder” to prove doubters wrong.

“I am going to recruit a lot of kids, we are trying to bring something special to Champaign,” Moffitt said. “I think I have the leadership ability to do that, and it is going to be guys who are flat out ballers.”