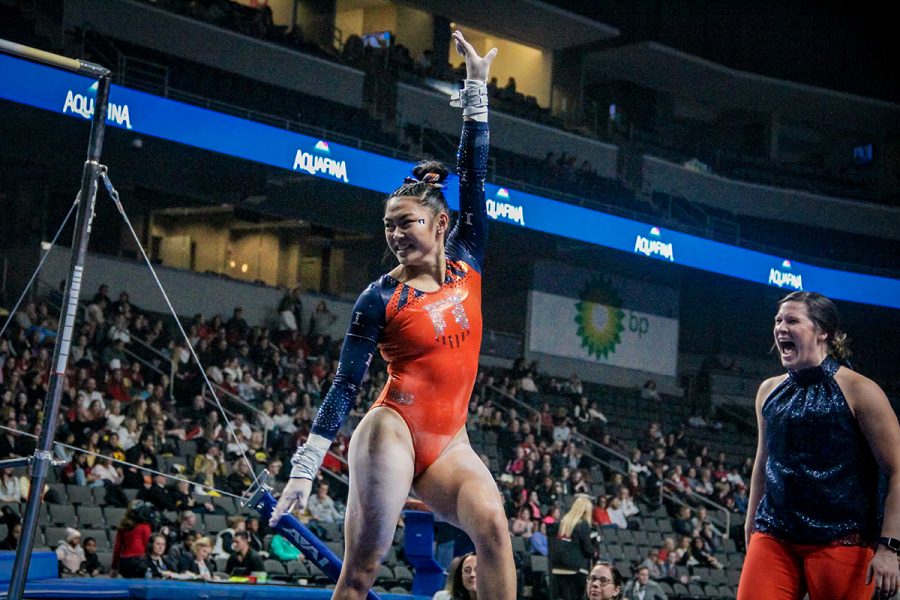 Freshman Mia Takekawa completes her routine at the Big Five Meet in Toledo, Ohio on Feb. 21.

Back in January, Takekawa famously scored a 10 on the beam for the first time in Illinois history. She finished the season with eight event titles, earning both Big Ten Gymnast of the Week and Big Ten Freshman of the Week twice.  Last month, a video posted on the team’s Twitter account of Takekawa receiving a full scholarship went viral.

In Simons’ first season with the team, she claimed three event titles, all on floor, including twice scoring a 9.9. Simons was key for the Illini to place second at the Big Five meet. In the meet, she scored a 9.825 on the vault and 9.9 on floor.  Simons became an important piece for a team in need of replacing their senior class.

Scott came off a solid freshman campaign with an even better sophomore season. Scott set career highs in vault, beam and floor this past season. Her 9.925 floor routine against Western Michigan was the season high for the Illini.

Unfortunately for Howell, her Illini career seems to have ended prematurely. This is the second straight season Howell received Second Team All-Big Ten honors, in addition to her third-straight Academic All Big-Ten. At the Big Five, Howell tied her career high on bars with a score of 9.925. On the season, Howell won five event titles, including three on bars, one on beam and one all-around. Howell’s bar routine will be greatly missed next season, as she amassed nine titles in her Illini career.

In addition to the All-Big Ten honors, nine gymnasts were named to the Academic All-Big Ten team, and junior Nicole Biondi was named Illinois’ Sportsmanship Honoree.