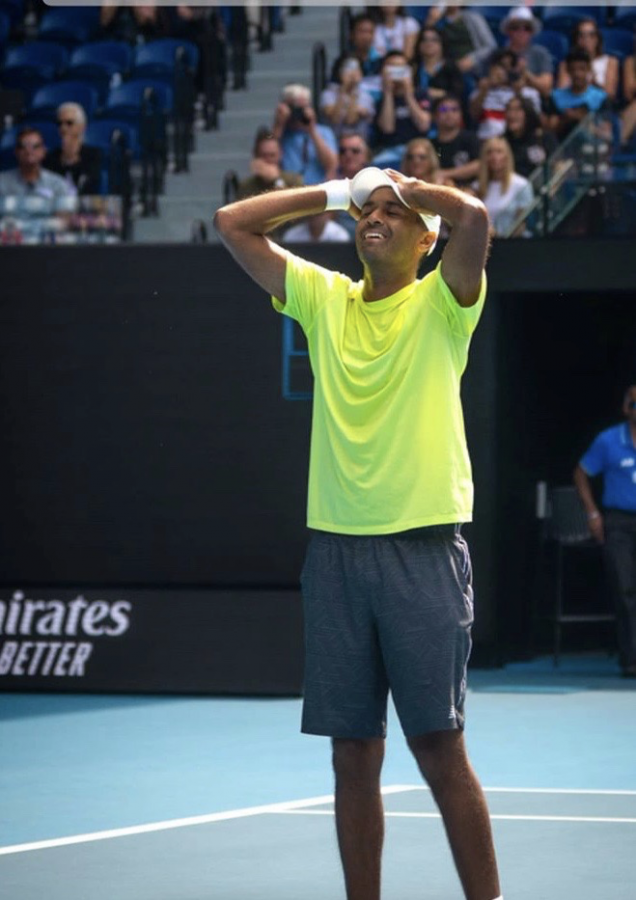 When assessing the past twenty years of Illinois men’s tennis, the clear standout is the 2003 season. The team’s perfect 32-0 record not only led them to the NCAA team championship, but also to the doubles and singles titles. This feat captured the coveted “triple crown” for the Illini, only the fourth team to do so, and as of 2020, the most recent. They were also the first team to win all three championships with three different players.

The Illini roared into the spring season with incredible momentum, highlighted by a strong fall season that saw an Intercollegiate Tennis Association (ITA) National Championship in doubles for juniors Amer Delić and Michael Calkins in mid-October and an ITA Midwest Regional Championship by junior Phil Stolt in the same month.

The team saw an explosive start to nonconference play, highlighted by wins over No. 34 Notre Dame and No. 8 Duke, along with 7-0 shutout victories over No. 5 Florida and No. 27 Georgia, a college tennis blue blood.

An early season highlight came in the form of an ITA National Indoor title, headlined by a victory over No. 3 Baylor and another triumph over now-No. 6 Florida, winning Illinois’s first national team tennis title. Illinois also represented the first team to win the title from a state other than California since 1983.

The team, now ranked No. 1 in the nation and carrying serious momentum into conference play, only continued their domination of college tennis, seen in a 6-1 road win at No. 5 California and 7-0 blowouts at No. 22 Pepperdine and No. 45 Indiana. The team’s regular-season title was followed by a dominant Big Ten tournament championship in which the team allowed just one point in their three matches, coming in the final against No. 17 Minnesota.

As if there was ever any doubt, the team continued its success into the NCAA tournament, shutting out Butler and No. 27 Clemson before taking out No. 12 Washington, 4-2, and No. 8 Mississippi, 4-1. The team capped their perfect season with a 4-2 win over No. 4  Stanford in the tournament semifinals and secured the title with a 4-3 victory over No. 6 Vanderbilt, which was the team’s closest match the whole season.

Delić, Ram and Wilson were all named to the First-Team All-Big Ten Team, in addition to securing All-American honors. Delic was also named the Dike Eddleman Athlete of the Year Award recipient for Illinois Athletics and was declared the Big Ten Male Athlete of the Year. However, the team’s most significant aspect may have been how they changed the face of college tennis as a whole.

Illinois certainly made history with its title, becoming the first school other than Stanford, UCLA, Southern California or Georgia to win the team title. Ram, now a professional tennis player, spoke about the significance of the season.

“Up until that point, college tennis had been dominated by very few schools, and they were all basically ‘warm-weather schools.’ We were kind of the first ‘cold-weather (school),’ the first outside of that small group,” Ram said.

Additionally, Ram noted many critics claimed winning the title couldn’t “be done by a cold-weather school, it (couldn’t) be done by a Big Ten school. Not only did we do it, we did it in such a dominating fashion … we were able to do a few things that year that people said weren’t possible.”

The team’s success had a ripple effect on college tennis, loosening the stronghold held on the sport by the major programs in terms of recruiting and success.

“If you were a good player and you wanted to do well in college, you basically went to one of three or four places … our coaching staff was able to show there was another way and possibly even a better way to (win). I think that has definitely lived on well past that season,” Ram said.

While the 2003 season was the peak of success for the program, that year was merely the culmination of efforts for countless people involved in Illinois tennis, from coaches to players.

“You don’t just wake up one day and go from a very average or below average team to that kind of dominance,” Ram said. “It takes building a culture and building a way to go about things over a long period of time … just because we were the ones on that particular team doesn’t mean that we were the only ones that were a part of it.”

Despite having a long and successful career in professional tennis, Ram still ranks his title at Illinois among his proudest moments. Most recently, Ram captured the doubles title at the 2020 Australian Open and is currently ranked as the No. 9 doubles player by the Association of Tennis Players.

“Winning a Grand Slam and all that is great, but (winning a title at Illinois) is right up there with my memories and proudest achievements,” Ram said. “Even if it wasn’t a professional thing, even if it was collegiate, it still is quite special … it still ranks up there as one of my most memorable achievements, which shows how cool and how important it is.”