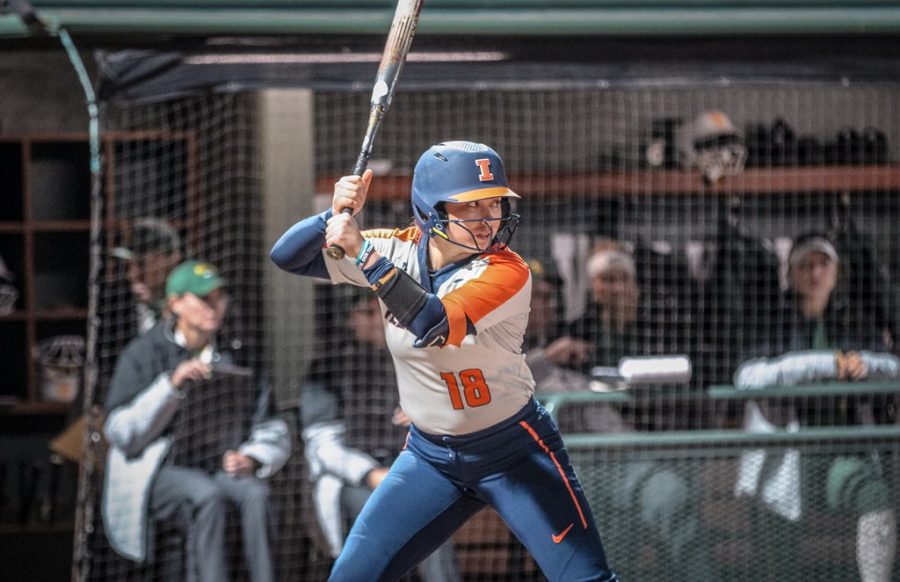 Junior Catcher Bella Loya waits for the pitch during the match against Baylor on Feb. 21.

The last time an Illinois team competed in a sporting event this school year was on March 12: the Illinois softball team’s win at Missouri. The team has been at home, communicating through apps like GroupMe and Snapchat while social distancing.

“Our group chat stays definitely hot during this time,” junior catcher Bella Loya said. “We call each other a lot, so (we’ve) been keeping pretty good contact with each other. (In) as many ways as we can.”

The team was set to host the Big Ten tournament May 7-9. To commemorate the occasion, a video of the team passing along a softball was posted May 7.

Loya said that it was senior infielder Maddy Adams’ idea to organize the video after other teams had created similar videos (Purdue softball had posted a similar tweet March 31, but Adams said that Kentucky was one of the teams that inspired her to get the team to make the video).

The team also made sure to have fun with it, with several dogs making an appearance. Adams said Loya made one of the more creative videos where she cleaned the ball.

“I had my sister’s dog run the ball through the (camera) feed at the end of the video,” Adams said. “I think we all just did something different so it wasn’t the same thing in every video.”

Coordinating a video with people across the nation can be difficult, but Loya said the team was able to work with each other to make sure the video was seamless.

“We had a certain order, and then we coordinated with the people, like, in front of us and below us,” Loya said. “We tried to just have the ball go the same way and try to be as creative as possible.”

Videos are not the only content the team has put out recently. The softball program has created a Spotify profile and some of the players have contributed their personal pregame playlists to the profile, but the team’s walk-up playlist is the most liked one. Sophomore pitcher Sydney Sickels said it was SID Libby Knight’s idea to put the playlist together, and Sickels contributed her walk-up song to the list.

Sickels said she changes her walk-up song each year, but this year’s walk-up song would have been “GDFR” by Flo Rida. However, the original version of the song was not available on Spotify so Sickels substituted in a remix of the song.

Sickels usually picks a new walk-up song each year. While she’s generally partial to remixes (her walk-up song last year was “Revolution,” which also was on the playlist), she was leaning toward the country song “Good Vibes” as her walk-up song this year.

“I think my main walk-up song would be, probably, “Good Vibes,” Sickels said. “I’m kind of planning on using that next year.”

Loya uploaded her personal playlist to Spotify, which features songs like the AC/DC classic “Thunderstruck” and “Sugar, We’re Goin’ Down” by Fall Out Boy.

Her playlist hasn’t changed much over the years (the newest song on the list is “Youngblood” which came out in 2018), and Loya likes the consistency of the music. She often puts her playlist on shuffle, but sometimes likes to listen to the same song a couple of times.

“I’ve been (listening) to that kind of music my entire life,” she said. “I kind of like it how I’ve been listening to those songs before games in high school and travel ball and then bringing (them) to college.”

Music is not the only pregame ritual for Loya. She also writes the names of family members on her wrists in sharpie before games, a tradition she started when her great-grandmother passed away.

“My great-grandma passed away when I was at a tournament in travel ball,” she said. “I wrote her name on my wrist and (just) ever since then, (I’ve) really liked having her with me.”

Adams described herself as “not a very superstitious person,” but also listens to music before games. She said she has changed her playlist over the years.

“I look back in high school, and my playlist (was) EDM music and techno music,” Adams said. “I think it’s a big mixture of music on there now compared to it kind of just being the same genre of music.”

Adams graduated this past weekend and does not plan to return to the team next year. However, she’s looking forward to hopefully taking the mound in the alumni game.