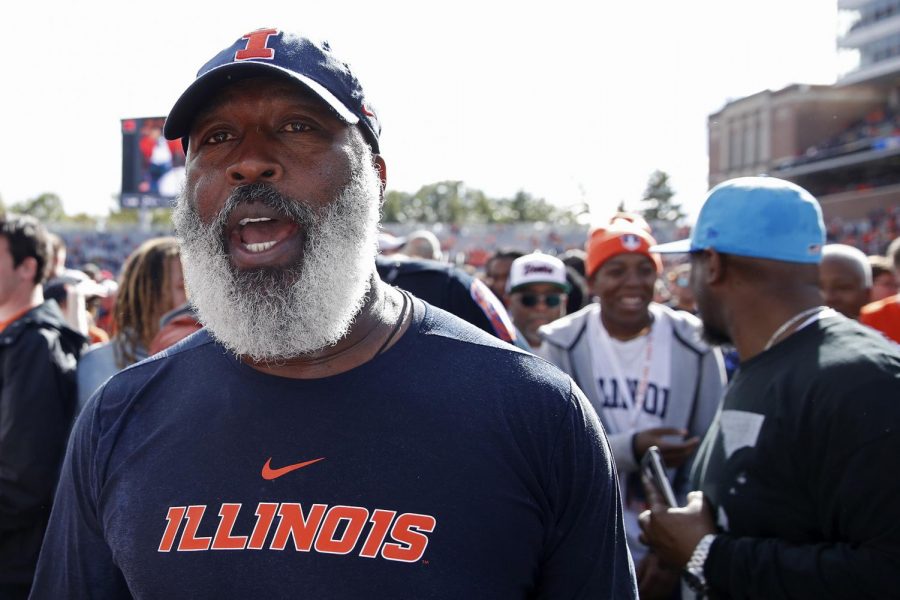 Illinois head coach Lovie Smith celebrates after a game-winning field goal as time expired in a 24-23 victory against Wisconsin at Memorial Stadium on Oct. 19, 2019, in Champaign, IL.

On Dec. 7, Illinois received their first commitment in their 2021 recruiting class — Samari Collier a three-star quarterback from DeSoto, Texas.

Illinois would have to wait over just under five months for their second 2021 pledge, which came on May, 3, from Ga. defensive back Prince Green. However, since May, 3, Illinois quickly turned two commitments into six, gaining momentum.

Illinois went from not receiving a commitment in five months to reeling in five in one month. What changed?

First, it’s important to remember that Illinois has thrived in recruiting when recruits visit the campus since head coach Lovie Smith was hired in March 2016. Illinois has used spring practices as a time to bring top targets to Champaign, but the coronavirus pandemic led to the NCAA instituting a recruiting dead period, which restricts recruiting visits of any kind.

Illinois was forced to adjust to the different recruiting the scene, and their message to recruits changed, too. There may not be a connection between recruits committing and the coronavirus, but there are more high school recruits committed to college programs now than many previous years at this time.

Since Smith’s hiring in 2016, Illinois has had a less aggressive recruiting style than other schools — see Minnesota as an example. When the NCAA instituted the dead period, Illinois’ laid back approach didn’t favor them landing large sums of commitments, because other schools across the country began to focus more time and attention on recruiting. What else were they supposed to do? Their players were sent home and spring football was canceled.

When the NCAA extended the dead period to June 30, on May 13, Illinois recognized that their hopes of getting visits to Champaign became very limited. Their message may have changed.

Since the extension of the dead period May 13, Illinois has received a commitment from four prospects, three of which are their top-ranked recruits. The message the staff has to targets may not have changed, but the aggressiveness the staff has may have changed.

Illinois still has the lowest-ranked recruiting class in the Big Ten and 62nd nationally, but they have momentum in the recruiting world. It is key to continue to build on the momentum and to continue adding prospects, especially because Illinois will take close to 20 signees in their 2021 class.

Illinois still needs to add more recruits at offensive line, the defensive line, wide receiver, linebacker and potentially a defensive back, so this recruiting class is still a long way from being a finished product.

However, what the six current members of the class give Illinois is a solid base to build on. The staff has done that, and the three most recent commits (Sedarius McConnell, Daniel Edwards and Brody Wisecarver) are the three highest-ranked members of the class. Continuing to build and find under the radar prospects, like Trevor Moffitt and Prince Green, will lead to a good class that can lay the foundation for Smith’s program to build off of.

Stay tuned to Twitter for more GIFs from the coaching staff to know when the staff lands a new commitment.