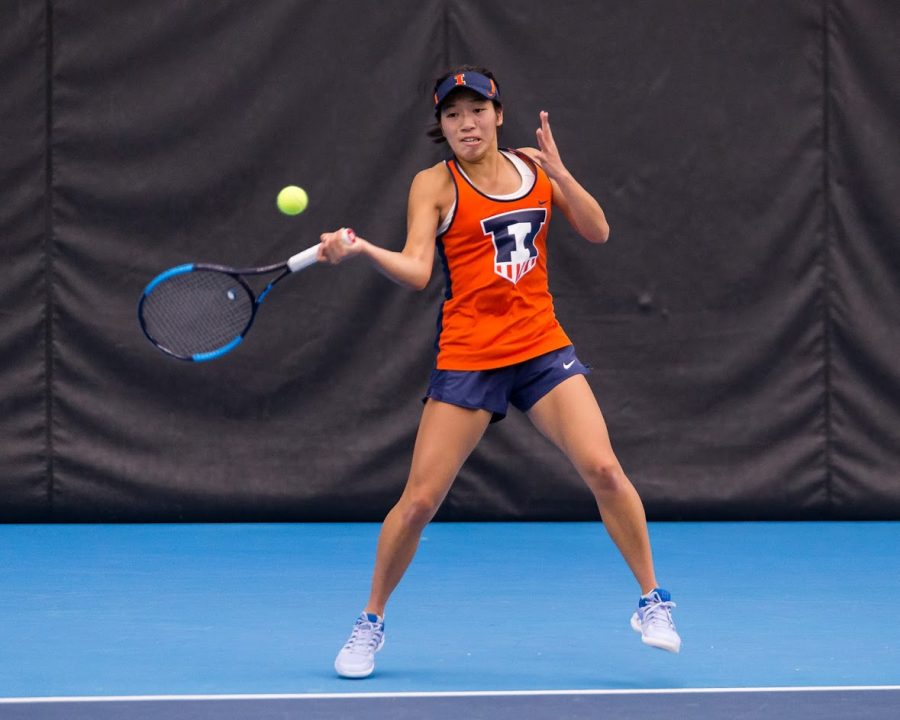 Illinois’ Asuka Kawai returns the ball during the match against Notre Dame at Atkins Tennis Center on Friday, Feb. 8, 2019. The Illini won 4-3.

Juniors Asuka Kawai and Mia Rabinowitz were named to the Big Ten women’s tennis All-Conference team on May 20. For both, the honor came as a surprise but for very different reasons.

Heading into the season, Kawai was far and away the most talented player on the Illinois women’s tennis roster. She was coming off her best individual season, going 15-10 at the 1-spot in singles and was named an All-American. With so much momentum, she seemed primed for another great year.

The season started out well for her, as she earned a singles victory in the 1-spot over No. 5 ranked Duke early in the season. Unfortunately, that would be one of the only bright spots of her season as she quickly went down with an injury.

Kawai ended the season with a 2-1 singles record and a 4-2 doubles record, which was enough to earn the All-Conference nod. Despite earning the award for a second consecutive time, Kawai viewed this season as a down year for herself.

“I wasn’t expecting to get any awards, because I wasn’t doing too well this season,” Kawai said. “Things weren’t going well, and I had an injury.”

Although Kawai is immensely physically talented as a tennis player, her biggest recent hurdles have come mentally. Part of the reason Kawai has been so successful on the court over past years has been her hyper-competitive mentality, but that attitude can sometimes serve as a double-edged sword as increased expectations creep in as she improves.

“I don’t like to see (the picture of) myself in the facility about (being named an) All-American,” Kawai said. “It’s a really tough situation for me to look up and see that I’ve done that but now I’m not that capable.”

According to head coach Evan Clark, one of the biggest struggles for the team has been the mental aspect of their games. Although the program has been lifted to new heights in recent years, so have the expectations the players put on themselves.

In Rabinowitz’s case, this was her first time earning the honor. The award serves as evidence of yet another step in her slow but steady ascent as a tennis player at Illinois. Throughout her time at Illinois, she has been a steady hand, mostly playing matches at the 3-spot. This year, she got the opportunity to step up and fill in for Kawai, playing matches in both the 1- and 2-spot.

“Mia’s been incredible,” Clark said. “She’s probably the hardest worker we have. She does a lot with a little. Small in stature, but she just works and works and works. She’s gotten better. She played three or four her first year and now she was up playing one and two this year, really doing a good job of holding down the 1-spot the part where Asuka was out. We were super pleased with her.”

Although she ended the season with a 5-7 record in both singles and doubles, Rabinowitz’s season behind that number told a much different story. Rabinowitz rattled off two different singles wins against nationally-ranked opponents, as well as being named Big Ten Athlete of the Week on Feb. 18.

“This award is a result of all of the years and days of work that were put in,” Rabinowitz said. “This is a special accolade to have proof of it.”

Kawai and Rabinowitz being named to the All-Conference team marked the first time Clark has had two different players named for the honor during the same year. One aspect that made these awards especially unique is that the pair are doubles partners and roommates, allowing them to have a special relationship where they can learn from and push one another.

“We had a great freshman year together, and since then we’ve been grinding together on the court,” Kawai said. “Last year, we did a really good job in doubles. We never fight on court. We give advice to each other in doubles, and I feel like that part of being accountable to each other is huge. We trust each other, and no matter how hard the time is, we believe in each other. That type of mindset on the court in season and practice is really important. I feel like that’s the big difference that we have.”

One of the additional benefits of Illinois players receiving this award is the example it sets for some of the underclassmen on the roster. Both Rabinowitz and Kawai cited seeing their teammate Jaclyn Switkes earn the honor in 2018 as something that inspired them to work toward earning it themselves. With a roster that includes three freshmen, awards like this are important example-setters for how to succeed within the program.

“It really boosts my confidence, but I try not to settle,” Kawai said. “I try to forget about it and move on and always be hungry for more. I feel like that’s the important mentality when you get any type of award. It means a lot, but I can’t really feel accomplished by it. I need to just move on and keep grinding.”