Where would Illinois basketball be if they beat Rutgers in 2017? 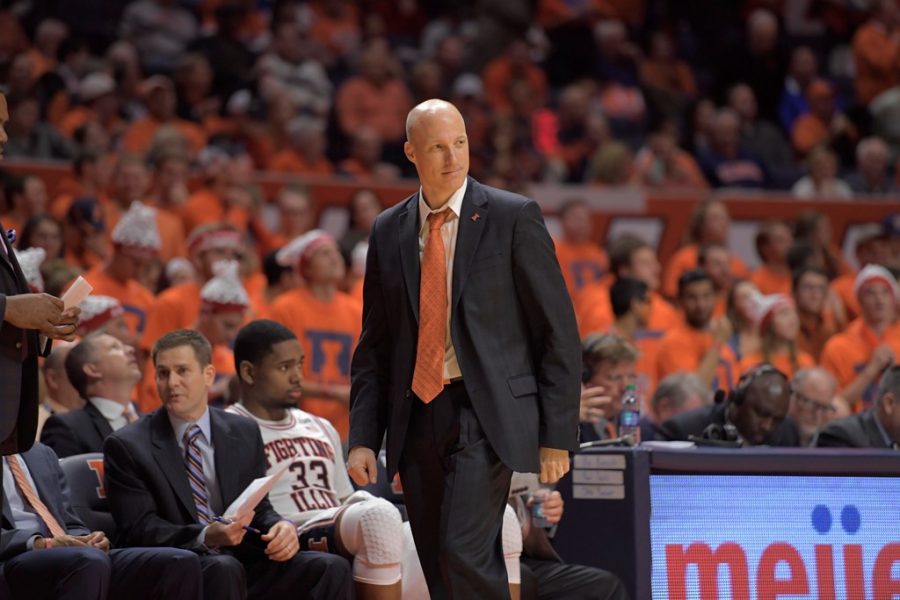 Former Illinois Head Basketball Coach John Groce looks toward the court during the match against NC State on Nov. 29, 2016.

It’s March 4, 2017. All Illinois had to do was defeat Rutgers. It didn’t matter if it was by one or 50 points. If Illinois could manage to knock off the worst team in the Big Ten, they would’ve clinched their first NCAA tournament appearance since John Groce’s inaugural season. Newly hired athletic director Josh Whitman saw the program as a shell of itself. But would Groce still be in Champaign if he had won that game?

To put it nicely, the Groce tenure was a disaster. After years of unmet expectations under his predecessor, Bruce Weber, the Illini decided it was time to make a change at head coach. With the 2004-2005 season still on peoples’s minds, the Illini faithful had a hard time adjusting to Illinois teams barely even being a bubble team.

After Weber’s dismissal, the Illini got publicly rejected by current Texas Longhorns head coach Shaka Smart, who was fresh off of a Final Four appearance at VCU. With many candidates rejecting the idea of moving to Champaign County, Groce was finally picked as Weber’s successor, an uninspiring choice to many Illini fans.

“There’s always going to be skeptics in everything in life,” Groce said to the St. Louis Dispatch. “If you don’t have thick skin in this profession, you’re in trouble. You can’t please everybody. You have to do what’s right. … There are going to be skeptics, and it’s all about how you deal with them.”

In Groce’s defense, he wasn’t an awful hire. During his tenure at Ohio University, Groce led the Bobcats to two NCAA tournament appearances, including a Sweet 16 birth. But it was a reality check to Illini fans: their program had lost the lust of luring a top-tier candidate.

In the four years leading up to Groce’s would-be last season, the Illini made just one NCAA tournament appearance while appearing in the NIT twice. And remember, this was all under a different athletic director. But with Whitman’s first actions after being hired, Groce knew his seat was boiling.

Three hundred sixty-four days before Illinois tipped off against Rutgers, Whitman fired Illinois football head coach Bill Cubit, replacing him with Lovie Smith. It became clear that Whitman wanted his own people, not counting on past decisions by failed athletic directors for future success.

“For some people this might feel like another body blow in a series of body blows,” Whitman said. “I see it as a first step toward what we want to build.”

With pressure to succeed immediately under his new boss, the Illini struggled in Big Ten play. After being routed by a bad Penn State team at home, the Illini fell to 14-12 after a 10-3 start.

But something changed after that game. For a brief period, Illinois gained its mojo back, and it appeared that Groce might actually keep his job.

Behind the heroics of Illini guard Malcolm Hill, the Illini reeled off three consecutive victories to put them squarely on the bubble. On Senior Night, the Illini hosted fellow bubble team Michigan State. After staking out a six-point halftime lead, the Illini held off a young Cassius Winston and the Spartans, securing a 73-70 victory. The home crowd erupted, as they finally thought Groce had brought back the Illini to relevance. But the source of the problem still remained, as evidenced by Groce’s statements.

“It was a high-level game, there was a lot of emotion both ways,” Groce said. “It’s kind of cool when you’re still playing for something.”

I guess it’s “kind of cool” when you play for a bottom seed in the NCAA tournament … for Nebraska. This is Illinois. Five Final Four appearances. At the time, a top-ten program in terms of winning percentage. Numerous NCAA March Madness appearances. And Groce is setting the bar at just making the tournament?

Looking back with 20/20 vision, are Illini fans really surprised their program blew a 10-point lead in the second half against a 15-18 Rutgers team the very next game? Are Illinois fans really shocked that Michigan, a team that was just in a plane crash and wearing practice uniforms, pounded Groce and company by 20 points in the Big Ten Tournament? The truth: They probably blocked it from their memory.

After the late season slide, Whitman did what he wanted to do; he hired his own guy. Whitman promptly fired Groce and went down to Stillwater, Oklahoma, to lure Brad Underwood away from Oklahoma State. But what if Groce did knock off Rutgers, securing a tournament berth?

If Illinois had held on to knock off Rutgers, Groce would most likely have been back in Champaign for another season. Groce would have had the chance to develop recruits Trent Frazier, Da’Monte Williams and Mark Smith, the latter of whom eventually transferred to Missouri.

But can an athletic director really trust Groce to develop talent? It took him years to develop his own guys to even compete as a bubble team. So how much of an impact would keeping Groce another year have been? Not a lot, and Illini fans can thank one man: Josh Whitman.

Groce would have surely been fired after the 2017-2018 season. There’s no way Whitman would’ve allowed a Round of 64 appearance by Groce to stay for another decade. Being a bubble team was a disgrace for a program with as much history as Illinois.

“We have a basketball program that we all expect to compete for Big Ten and national championships year in and year out,” Whitman said during a press conference. “I was here at the peak. I was here 10 years ago. I saw the energy. I felt the environment at State Farm Center when you couldn’t find a ticket, when every game was an event, every fan was in an orange shirt, the waiting list was thousands of people long to get a season ticket to an Illinois basketball game. That was 10 years ago. And if we’re not careful, it will be 30 years ago. That’s what I can’t allow to happen.”

Instead of asking where would Illinois be with Groce, a better question is where they would be without Whitman.

Whitman is ambitious. He sets the bar high and expects people to live up to it. Although success was not immediate under his reign, the growth was there. His coaches began to recruit better, the facilities got nicer and eventually results started to come in. The football team knocked off No. 6 Wisconsin and won on the road against Michigan State. Could Bill Cubit do that? Could John Groce recruit the likes of Ayo Dosunmu, Kofi Cockburn and Adam Miller while finishing just a game out of first place in the toughest conference in basketball? No.