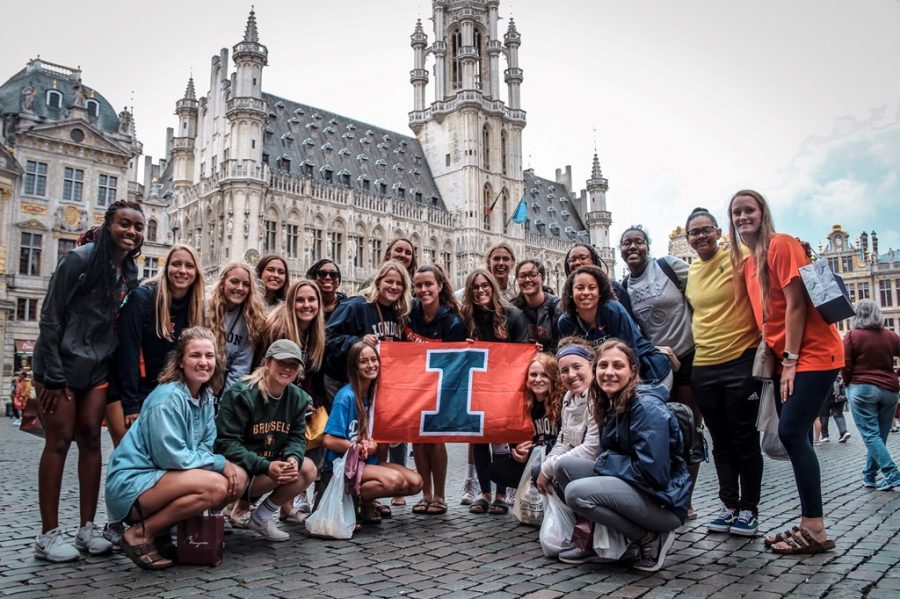 The University of Illinois Softball team poses for a photo at Grand Place in Brussels, Belgium during their summer trip in 2019.

For the Illinois softball team, a trip to Europe was a once in a lifetime experience. Junior catcher Shelby Stauffenberg found the trip to be unforgettable.

“It was one of the best experiences of my life,” Stauffenberg said.

The team left for Europe on Aug. 6 and spent a week and a half abroad. They spent most of their time sightseeing and exploring cities, playing in two games while there.

Though the team spent most of their time in Europe away from softball, they were able to visit sites like the London Eye and the Eiffel Tower, among others.

After a 10-hour flight to Europe, the team hopped off the plane and began their trip with a little sightseeing.

“We just got to go on a bike tour and explore London,”  Stauffenberg said. “We just, like, explored all of London in one day, and it was cool to see.”

Seeing the sights wasn’t the only memorable part of the team’s trip. The team also got to try different cuisines in Europe, and Stauffenberg said the most interesting food she tried was escargot. She didn’t enjoy it and said it was “very salty.”

Some of her teammates had a more enjoyable experience sampling the fare. Senior pitcher Akilah Mouzon enjoyed crepes and macarons in Paris, among other foods around the continent.

“I remember having Belgian waffles in Belgium,” Mouzon said. “So we got to try foods from different countries that they’re known for and kind of compare it to the American versions of that food; it was completely different. And it was really good.”

On the field, the team was able to experience playing softball in other countries. The players noticed several differences between softball in the United States and Europe. They found softball is much more laid-back in Europe, and the sport is not as popular as it is here.

“It’s more relaxed and less competitive than it is here,” freshman outfielder Gabi Robles said. “We were in full uniforms, ready to play, and they’re like playing in jeans and t-shirts.”

The team remembers more about the connections they made abroad as opposed to the games they played in. They helped out at a softball clinic in the Netherlands, and Stauffenberg said she still stays in touch with some of the people she met there.

Normally, softball teams are not able to get together in August the way Illinois did, and the team was able to have a smoother beginning of the season for it.

“It was a game-changer,” Robles said. “We got to bond with the team more than any other team is able to. And the returning seniors were there, too, so it was good to see leadership and just how the team is overall before we got to play season games.”

The Illini spent the trip getting to know the incoming players, and Mouzon thought that the time in Europe helped the freshmen get acclimated to the team.

“It couldn’t have been a better start,” Mouzon said. “At the time, we had freshmen coming in that we were just meeting, and by the time the ten days were over, we felt a lot closer to them.”

Head coach Tyra Perry’s first trip to Europe was when she had just graduated from Louisiana State University, and she went to Germany and taught softball to military kids. She had previously not been to Europe and got to see sights like the Eiffel Tower that she had learned about growing up.

“I’m from a small town in Louisiana,” Perry said. “Just having that opportunity to expand my horizons and expand my vision was priceless, and (to) combine it with the sport that I love, you know, it was a great kick-off or kick start to my adult life.”

Over 20 years later, Perry was leading a softball team of her own over to Europe and was eager to take them on the trip.

“I (was) overjoyed to give that same feeling of opportunity to my young players,” Perry said. “(I’m) thankful to our administrators for providing such an opportunity for our student-athletes to broaden their horizons.”

Though the team was unable to capitalize on the team bonding experience they had over last summer, they still look fondly on their time in Europe and are partial to Amsterdam.

“My favorite part of the whole trip was probably going to Amsterdam,” Mouzon said. “It was really good food there, there (were) a lot of cool places to visit.”