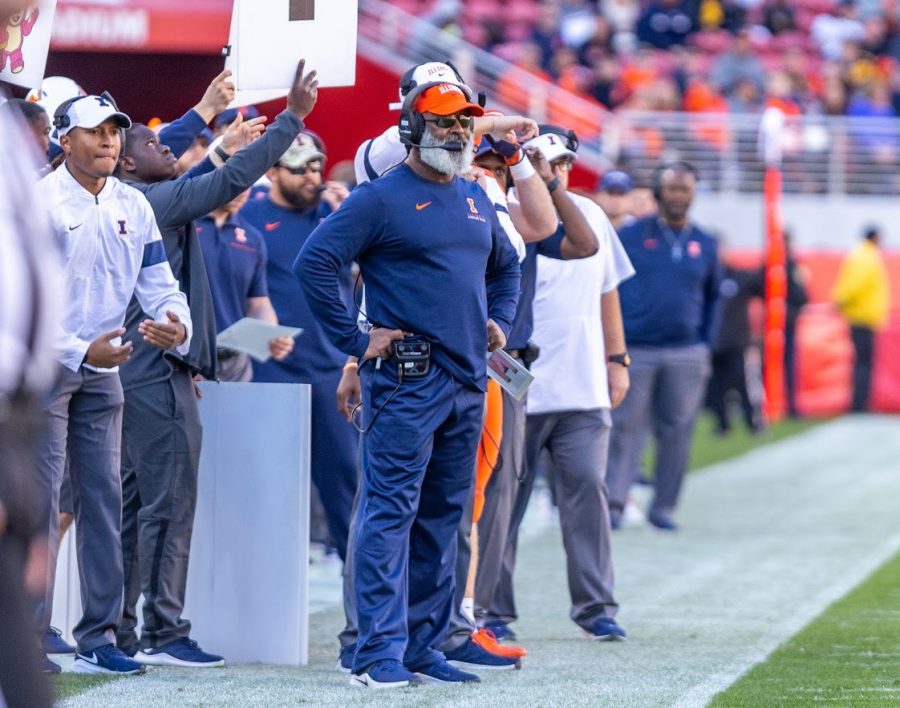 Illinois Head Football Coach Lovie Smith watches from the sideline during the Redbox Bowl match against California on Dec. 30, 2019 in Santa Clara, CA.

Coming off of its first bowl since 2014, the Illini expect to build off its foundation for a breakout season. With the twelfth most production coming back in the entire country, it appears Illinois has a chance to secure its first New Year’s Day bowl since 2008. But, like every other college football team this season, much of the preseason has been drastically changed due to unforeseen circumstances.

COVID-19 threw a huge wrench into the way of life in the United States, and sports were immune to it. Recently, some sports have already returned — professional golf, UFC and NASCAR have held events. The NBA is planning to return for a short regular season and playoff, and the NHL is having an expanded 24 team playoff.

With baseball looking like it may have a cancelled season, it’s safe to assume they could probably survive— fiscally— without a season. But in the college athletics universe, college football is a necessity.

According to an ESPN article from late May, a cancelled college football season would cost the industry four billion dollars, and it won’t just affect football. Football is the meal ticket for other college sports as its money can cover the non-revenue sports. Already, some athletic departments have cut certain sports due to budget concerns. That’s why keeping the players safe during this unprecedented time is vital in order to save athletics, let alone their season.

Recently, the Illinois football team has begun summer workouts to get ready for the season. Unlike last season, however, there are many stark differences.

“COVID has changed a lot of things,” junior defensive tackle Jamal Woods said. “We’ve limited the weight room to guys who need it, so we have small groups instead of big groups.”

“It was a process,” junior wide receiver Donny Navarro said. “We came to campus and got tested. We were quarantined for  four days in the dorms by ourselves. Very limited to what we could do. Meals were brought to our rooms, and we had to wear our masks all the time.”

Any college football team last season wouldn’t even think what’s happening this year would be plausible. No high fives or hugs after a good rep in the weight room? Having to wear a mask when working out? But in today’s current state, if Lovie Smith wants to host the Illinois State Redbirds on Sept. 4, it’s a no-brainer.

When teams are limited in what they can do, it’s vital for the student athletes to take matters into their own hands. An unlikely location for a workout has been created: the dorm room.

“I got a resistance band and worked some with that, as well as did push-ups in the room, so I kept myself active when we had the down-time of being contained to our rooms,” Navarro said. “Each of us are going to have a part to play in coming back, and the protocols that are to be followed are there for a reason.”

Although the football team has made the summer workouts “voluntary,” Woods noted that a good majority of the team has made it down to Champaign to train with the coaching staff. But it’s important to remember that living in a college town during the summer, let alone a pandemic, is a whole lot different than when the fall comes around.

By late August, over 30,000 undergraduate students from all over the country and the globe will come back to Champaign to start school, posing a threat of spreading the virus to the football team. With players having to go to class, it won’t be as easy for the team to stay away from students and faculty. It appears that precautions will have to be taken in order to protect their health and season.

“I’m still going to take my safety protocols,” Woods said. “COVID is real. I’m still going to do what we’re doing right now, trying to stay as isolated as possible to make sure I keep my health straight and don’t affect my team.”

“Each of us will have a part to play in this process,” Navarro said. “I don’t know if there will be increased changes, but the same health recommendations that the CDC and the staff is saying is what we are going to have to do to stay as safe as possible.”

But those same students and faculty members the players will avoid during the season might also hurt them in another way: empty stadium. As of now, it’s very likely that stadiums will have major capacity restrictions, meaning that teams might be playing in front of empty stands. Could Illinois have beaten the Badgers last season without the crowd noise? Will upsets even be as common this season or will the more talented teams just walk away with more victories due to weakened home field advantages? Regardless, it appears there’s one silver lining: players will still have the same hungry attitude even if they can’t feed off of the crowd.

“We still know what we are playing for,” Woods said. “We are still playing for the Illini family. Even if they aren’t in our presence, we still know they are watching us behind the screens.”

“We have the best fans in the Big Ten, and if they are not there, we’ll certainly miss them,” Navarro said. “But right now we must embrace change, and we will continue to prepare like we have and hopefully be successful.”