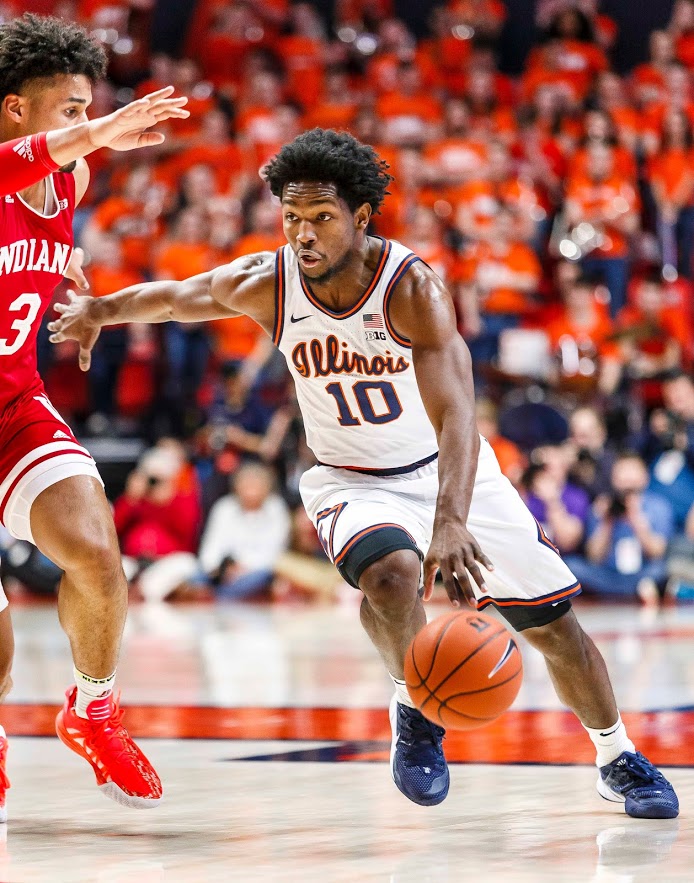 Senior Andres Feliz pushes forward against a defender during the match against Indiana on March 1, 2020 at State Farm Center. Feliz is part of the House of Paign team that is scheduled to compete in the TBT tournament tonight.

The House of ‘Paign will compete tonight in their first-ever game in The Basketball
Tournament. The team is comprised of mostly former Illini, headlined by recent graduates
Andres Feliz ’20, Leron Black ’18 and Malcolm Hill ’17. The team also consists of former DePaul
standout Billy Garrett and three-time Summit League Player of the Year and Third-Team All-American
Mike Daum.
This year is the first time a squad comprised of mostly former Illini will compete in the
Basketball Tournament. The House of ‘Paign enter the tournament as the No. 16 seed in the
tournament and will face the No. 17 seeded War Tampa in the first round. War Tampa is a
team consisted mostly of former Auburn players as well as players from Florida. With the
leader in three-pointers made in a career, Fletcher Magee and Bryce Brown starters on the
2019 Final Four Auburn team, War Tampa has the talent to threaten the House of ‘Pain.
War Tampa has a variety of great shooters, so expect a heavy arsenal of three-pointers
as well as a fast-paced game. The House of ‘Paign, on the other hand, have players that can
attack the rim at a high rate. In his time at Illinois, Hill scored 1800 points because of his ability
to get to the rim and score inside of the arc. They will need Hill to have command of the offense
and be able to get to their spots.
If the House of ‘Paign are going to win, they will likely need to use their size to their
advantage. On defense, Nnanna Egwu ‘15 was one of the best interior defenders in the Big 10
while he was at Illinois, and Daum will have to provide a post presence for the team. It will be
interesting to see how the team gels together as only a few members of the team have played
together.
Due to the coronavirus pandemic, The Basketball Tournament will be played differently
this year. The tournament is requiring COVID testing, and if a player tests positive then the
team will be eliminated. The rule has already played a role in the tournament as three teams
have been eliminated.
On the court, the House of ‘Pain is looking at a tough road ahead. If they
defeat War Tampa, House of ‘Pain will have to face Carmen’s Crew in the second round, the
defending champions and the Ohio State team.