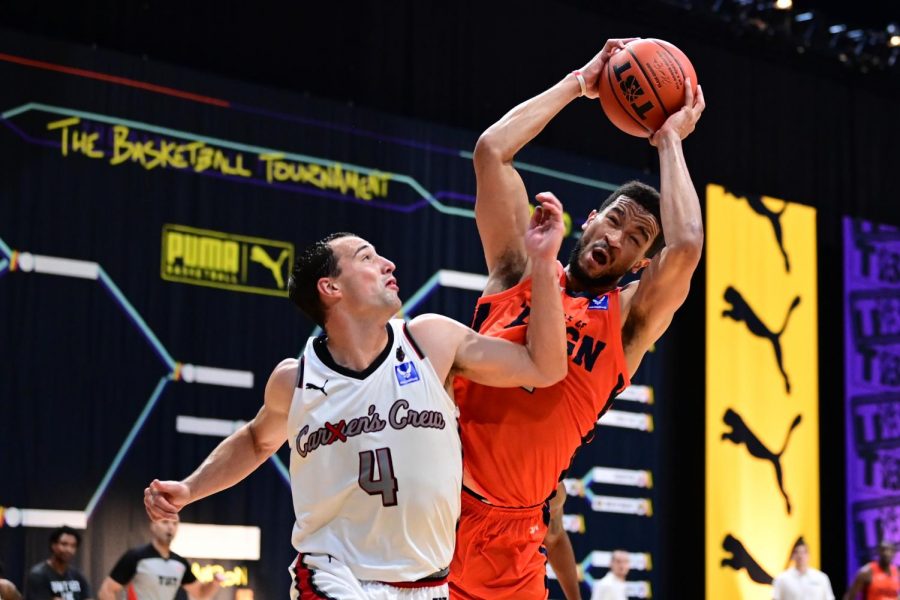 House of Paign player Billy Garrett jumps and catches the ball during the match against Carmen’s Crew in The Basketball Tournament on Wednesday.

House of ‘Paign will face Red Scare in the quarterfinal of The Basketball Tournament this afternoon. House of ‘Paign is coming off of a big second-round win against Carmen’s Crew, the No. 1 seed in the tournament and the reigning champions.

Carmen’s Crew, the Ohio State alumni team, was the heavy favorite going into the game, but House of ‘Paign was able to pull off the upset. Led by Mike Daum and Andrés Feliz, House of ‘Paign relied on great guard play and an array of three-pointers.

The game was closely contested throughout, and House of ‘Paign only led by four points going into the Elam Ending. Kyle Vinales took over at the end to give House of ‘Paign the 76-68 win. Head coach Mike Latuplip credits the win to the team’s togetherness.

Red Scare will pose another obstacle for House of ‘Paign. Red Scare is the Dayton Alumni team, and they received a first-round bye in the tournament. In the second round, they faced Big X in a competitive matchup. A run at the beginning of the fourth quarter sealed the game as they won 77-68.

Red Scare poses a threat that the House of ‘Paign has yet to see. Similarly to War Tampa, House of ‘Paign’s first-round matchup, and Carmen’s Crew, Red Scare shoots a lot of threes. However, unlike the two other teams, Red Scare plays a bigger lineup.

Against Red Scare, House of ‘Paign won’t have those same options. Red Scare’s frontline of Devin Oliver and Trevor Thompson is much bigger than Carmen’s Crew. Nnanna Egwu and Michael Finke will likely have to play a bigger role for House of ‘Paign and don’t be surprised if Leron Black sees an increased workload.

House of ‘Paign will also have to watch out for Trey Landers. The 6’5 guard was on the most recent Flyers team and has a knack for scoring inside the arc. Expect either Billy Garret or Malcolm Hill to be matched up to Landers to match his size. If House of ‘Paign wins, they will take on the winner of Golden Eagles and Team Brotherly Love in the semifinal.