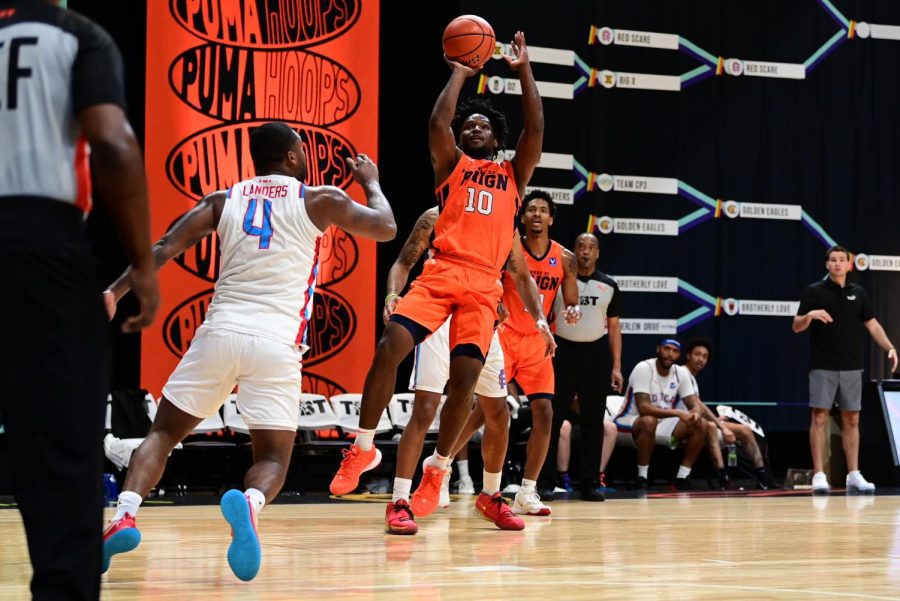 House of Paign player Andres Feliz shoots the ball during the match against Carmen’s Crew in The Basketball Tournament on Wednesday.

House of ‘Paign lost to Red Scare 83-76 in The Basketball Tournament. After two impressive wins to start the tournament, House of ‘Paign was eliminated as they struggled to find much comfort throughout the game.

For the first time in the tournament, Mike Daum struggled offensively. After back-to-back 20-point outings, Daum finished with just 12 points on 4-12 shooting. House of ‘Paign finished with four double digit scorers, but none of them shot the ball particularly well. Andrés Feliz, however, continued his stellar work on the glass as he corralled a tournament high 14 rebounds. Head coach Mike Latulip praised Red Scare for their performance

“That’s a good team. They’re smart guys and they won,” said Latulip, “Some of those guys played on an Elite 8 team and others were probably favorites in some odds to win a national championship.”

In the first quarter, House of ‘Paign struggled to stop Red Scare’s offense. Red Scare shot 60 percent from the field and made three three-pointers. It didn’t help that House of ‘Paign turned the ball over five times in period including three from Feliz. Red Scare led 22-17 after one frame.

The second quarter started out ugly as both teams combined for just six points in the first four minutes. Both sides settled in offensively as the half came to an end.

Red Scare came out hot in the fourth quarter as they grew their lead to 17 points by the start of the Elam ending. Red Scare went up 80-61 needing just two points to finish off the game, but House of ‘Paign wouldn’t go away.

Red Scare immediately fell into a shooting slump as the missed their next 10 shots. House of ‘Paign took advantage of Red Scare’s struggles and cut the lead to 81-76. Daum, who was House of ‘Paign’s best shooter heading into the game, had two open three-point attempts, but missed them both. After Kyle Vinales missed a three, Trey landers leaked out to get an open dunk and give Red Scare the 83-76 win.

The Red Scare were led by Landers, who finished with 19 points, 8 rebounds, and was all over the floor. Ryan McMahon and Ryan Mikesell each added 16 points as well.

“People don’t understand this about Malcolm Hill. He stays to himself at times, but what he did in these 11 to 12 days I can’t say enough about him.” Said Latulip.

He would go on describing the adversity Hill has gone through while at the TBT, specifically his grandmother passing away a few days ago. When asked about competing in the tournament Latulip only had positive things to say, and he even expressed interest in competing in the future.