Illini soccer make their way back to Champaign 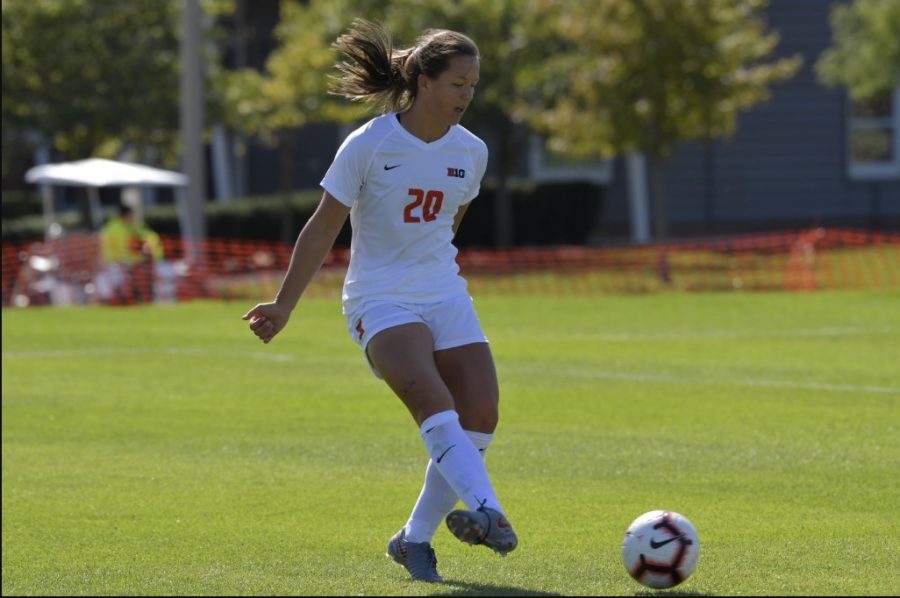 Sophomore Forward Makena Silber passes the ball during the match against Michigan State on Oct. 13, 2019.

Once Illinois moved into Phase 4 of Governor J.B. Pritzker’s Restore Illinois plan, Illini sports began coming back to campus. Earlier this week the women’s soccer team started to make their way back to Champaign-Urbana.

After discussion with the soccer staff, head coach Janet Rayfield made the decision for July 6 to be the date that her team can start coming back to campus to get into summer workouts.

“We looked at what made sense for us relative to when our season starts and our preseason starts,” Rayfield said. “It spread out the schedule of athletes coming back onto campus to be tested and that sort of stuff. It worked for everybody for that date to be that one where soccer reported.”

Rayfield wanted the girls to spend the Fourth of July with their families before heading back since it would most likely be the last time they would see them once back on campus for the summer and fall semester.

While the full team didn’t arrive on July 6, others will arrive July 27 with preseason starting August 4. The team was not required to report for the July 6 date as it was voluntary. The ones who will arrive at the end of July are doing so for personal reasons such as jobs, internships and family situations.

Rayfield has kept communication with the team over the past couple of months over Zoom. Calls were three times a week to check in with each other. One of the three weekly calls were dedicated to tactical training to keep their minds sharp and to stay connected with each other.

“We were having weekly conversations about what was going on campus, what was happening with our sport, and what the athletic department was doing,” Rayfield said. “They’ve been in the loop pretty much the whole time.”

Once Rayfield knew soccer could come back, she used the next Zoom call to let the team know. Rayfield made sure everyone knew that coming back was allowed and voluntary and not required.

Junior forward Makena Silber was super excited to hear the announcement from Coach Rayfield about being able to come back.

“It’s definitely shown a light at the end of the tunnel with everything going on right now,” Silber said. “I think there are still a lot of things that are kind of up in the air, but with the green lights to at least come back to campus and be able to be back in our environment is a good sign.”

Upon arriving on campus the girls who did come were immediately tested and temperature checked. Now all of them are quarantining in Bromley Hall living in separate rooms with limited contact with each other.

“The only time we see our teammates is when we go out in the hallway to pick up our meals,” senior goalkeeper Elizabeth Cablk said. “One of my teammates, Erin (McKeown), joked that meal time is like recess because we all get to leave our rooms and see each other. “

While in quarantine, workouts are all done on their own until they are given the all clear that they are done quarantining and able to do mandatory training.

“I actually brought a yoga mat to Bromely and I’m just doing a lot of body weight workouts, band workouts, and I’ve been going on a run every morning,” Calbk said. “I’ve been getting up at 6 a.m. everyday we’re in here just because if I go out any later it gets way too hot to run outside.”

Several days after the initial COVID-19 test, all of them were tested a second time. Once results come back negative for a second time, then everyone could get back into training.

Once everyone is done quarantining and can get back to the 7 a.m. workouts, the team will have to follow strict guidelines and protocols.

Upon arriving at the building to train, everyone, including the coaches, will have to go through a screening process. Additional protocols include social distancing in the weight room as well as cleaning of facilities and equipment used.

“There’s a really thorough system of processes and procedures in place to keep them as safe as we possibly can,” Rayfield said. “Temperature checks, surveys, you know symptom checks that they’re doing.”