Illinois athletics give update on COVID-19 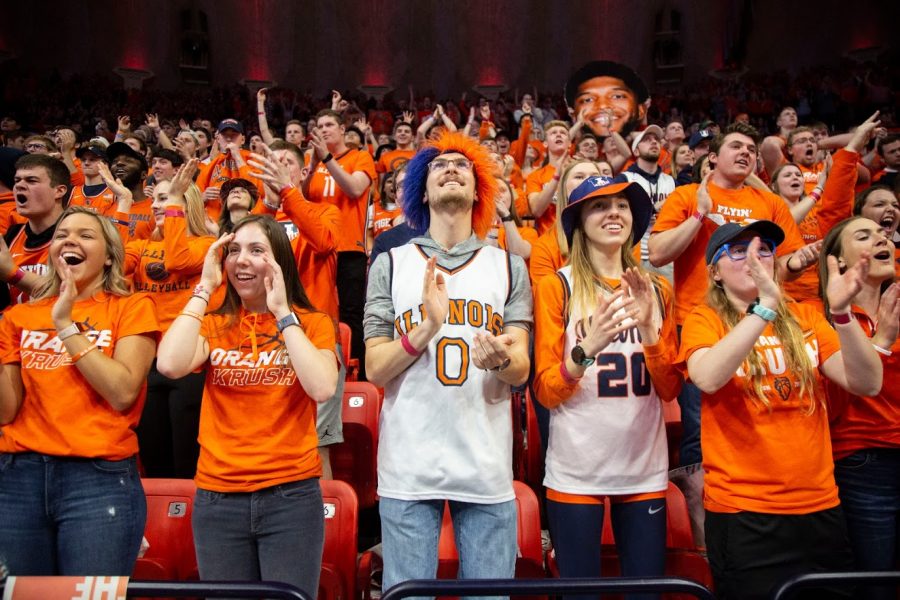 Students in the fan section cheer during the basketball match against Iowa on March 8 at State Farm Center. With the future of fall sports still up in the air, students are searching for ways to continue supporting Illinois sports teams.

Illinois athletics provided an update on fall sports Thursday. The university has not released fall sport schedules and only a handful of teams are back on campus: football, men’s and women’s basketball, volleyball and soccer. Athletic director Josh Whitman said that the University has about 165 student-athletes on campus, which is about 30% of student-athletes at Illinois.

Whitman clarified that student-athlete participation in sports is voluntary and scholarships won’t be affected if an athlete decides to not participate.

“We have reiterated that to (the athletes),” Whitman said. “This is one of those moments when they can make their own decisions.”

Last week, the Big Ten announced that the conference would eliminate non-conference games. The Illini football team lost out on games against Illinois State, Connecticut and Bowling Green, and will open up the season at Rutgers Oct. 3. Football’s conference schedule is online, but all other sports schedules have not been released yet.

As Illinois is in Phase 4 of COVID-19 recovery, outdoor sports stadiums are allowed to have 20% capacity. Memorial Stadium can host up to 12,000 spectators and Whitman said the student section would have a capacity at about 1,000 students.

Student season tickets won’t be on the market and instead, there will be a lottery for single-game tickets for Illini Pride members.

Indoor sports, such as volleyball, will not be allowed to have spectators under the Phase 4 guidelines.

How the Illini get to other arenas and stadiums will also be impacted by physical distancing restrictions.

Whitman said that the conference would try to avoid air travel as much as possible and try to travel by bus. The conference’s footprint ranges from Nebraska to New Jersey, and it is about a 19.5 hour drive from Lincoln, Nebraska, to Piscataway, New Jersey.

Randy Ballard of Illinois Sports Medicine also detailed the COVID-19 protocol for athletes. Ballard said athletes are tested via nose swab weekly, and when students first arrived on campus they were tested and went to quarantine for 72 hours, or three days.

Illinois is not releasing any information about whether athletes are testing positive for COVID-19, in contrast to other Big Ten universities. Iowa, Wisconsin and Ohio State, among others, have released numbers of positive COVID-19 tests amongst athletes, and Ohio State briefly paused football workouts due to an increase in positive test results.

The game-day environment at Memorial Stadium will have a very different look as well, and activities like tailgating are banned. Still, Whitman anticipates that the 2021 season will look similar to the 2019 season.

“(We’re) approaching this as a one-off year,” Whitman said.