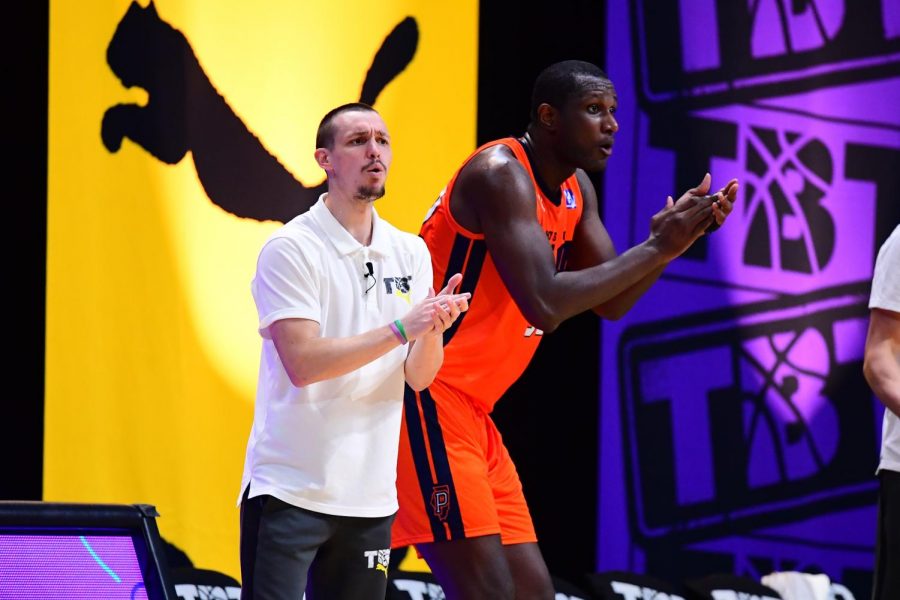 Coach Mike Latulip encourages his team, House of Paign, during their match against Carmen’s Crew in The Basketball Tournament on July 8.

The House of ‘Paign entered its Super 16 matchup with No. 1 seed Carmen’s Crew as a heavy underdog. After all, the Illinois alumni team was in its inaugural The Basketball Tournament run while the Ohio State alumni team had been a staple in the tournament for years and were the defending champions.

But those who watched the game saw a well-connected House Of ‘Paign team withstand a second-quarter run by Carmen’s Crew to knock off the defending champions and complete the sixteen over one upset. To some, that result may have come as a surprise. But to those donning the orange House Of “Paign jerseys, it was what they expected.

“We knew that we were confident in our game plan and our skills to beat them,” said Malcolm Hill, House of ‘Paign and former Illinois forward. “I heard people say that we didn’t have a chance. That’s everybody else’s opinion. We knew we liked our chemistry and we can follow the system and game plan.”

The idea for an Illinois based TBT team started in May of 2019 when the tournament reached out to Illinois alumni Michael Finke about putting a team together. Finke pointed them in the direction of Mike LaTulip, who got the ball rolling. LaTulip, who played at Illinois from 2012-2015 recruited former teammates Hill, Finke, Leron Black, and Nnanna Egwu to play for House of ‘Paign.

Through an Instagram direct message, he was also able to secure a commitment from DePaul alumni and former New York Knicks guard Billy Garrett Jr. But LaTulip’s best snag was former South Dakota State forward Mike Daum. After Daum hosted LaTulip on a visit to South Dakota in 2015, the two stayed in touch.

Daum was slated to play with a TBT team based in Iowa, but after they did not make the Columbus bubble, LaTulip was actively recruiting Daum to play for House of ‘Paign. The two had a lengthy phone call to discuss Daum’s role and how he’d be utilized. A day later Daum agreed to play for House Of ‘Paign.

“As a teammate, it doesn’t get much better than Mike Daum,” LaTulip said. “He’s so bought in and high-energy.”

Daum, who is the seventh leading scorer in NCAA history, showed his prowess early on. He dropped a quick nine points in the first quarter of their win over War Tampa in round one. After his scoring outburst, Garett Jr. turned to the forward and said ‘Daum, it’s like that bro?’. Daum finished with 21 points and 13 rebounds in their 76-53 win.

House of ‘Paign members got to Columbus five days before their first game. They isolated themselves in their hotel rooms for a day, practiced for three, then started the tournament on July 4th. Of the starting five, only Hill and Egwu had played together before. But the chemistry the team had was noticeable.

“We had a team mostly full of high-IQ guys. It was easy,” Garrett Jr. said. “The guys I was playing with, they made it easy for me to fit in.”

The group quickly bonded together off the court. They spent countless hours together in a team lounge watching movies, TV and just hanging out. LaTulip recounts that at first guys would pop in and out, but by the end of the trip, everyone was together. LaTulip mentioned how Hill and Finke did a great job keeping everyone together while Hill spoke highly of LaTulip’s personality.

“You can’t not laugh around ‘Tulip. He’s one of the funniest people I’ve been around,” Hill said. “Tulip was by far the funniest. He does perfect imitations and (has) a great memory with anything. He can reenact a memory to a tee.”

On the court, House of Paign’s run ended in the quarterfinals with a loss to the Dayton alumni team, the Red Scare. House Of ‘Paign trailed by 20 points in the fourth but rallied to make it a three-point game. That’s as close as the game would get as Red Scare pulled away to win 83-76.

Despite limited coaching experience, LaTulip’s ability to lead his team drew acclaim from pundits. The Mount Prospect native had yearned to put an Illinois TBT team together for years, and in Columbus, that dream came to fruition. If there’s a TBT next season, expect House Of ‘Paign to be involved.

“I don’t even think we’re close to the ceiling,” LaTulip said. “We set the foundation this year of ‘hey if you wanna play for the House Of ‘Paign you better be tough, you better guard and you better be a team guy’ because those are the characteristics of winning teams in this tournament.”