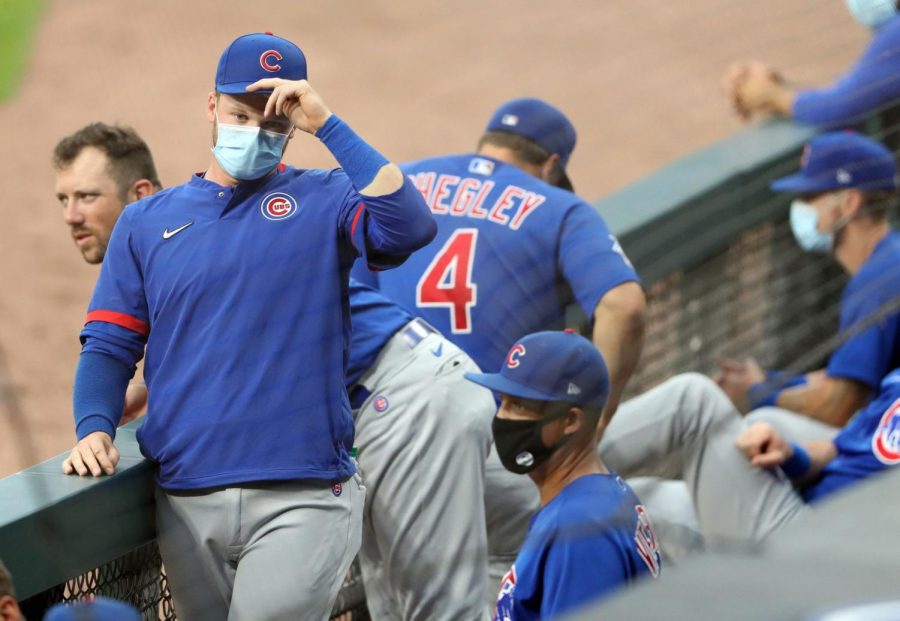 Chicago Cubs center fielder Ian Happ wears a mask in the dugout on July 20, 2020 during an exhibition game at Guaranteed Rate Park.

Better late than never, right? After a four-month hiatus thanks to the coronavirus, the first MLB regular season games were played last night. With only 60 games on the schedule, the stakes are a lot higher this year in an all-out sprint to October in a year that has “strange” written all over it.

At 7:09 Eastern Standard Time, the first pitch of the 2020 season was thrown out by Dr. Anthony Fauci at Nationals Park. Gerrit Cole and Max Scherzer proceeded to duel each other in a power pitcher clash reminiscent of the 2019 World Series. The Yankees took the win after leading 4-1 in the sixth inning before inclement weather cut the contest short.

The Dodgers and Giants were also on the diamond in Los Angeles. where the Dodgers’ new superstar, Mookie Betts, made his team debut. Hot off signing a contract that will pay him $30 million dollars per year for the next 12 years, Betts collected his first hit in a Dodger uniform in the team’s 8-1 victory over the Giants. Conveniently enough, this $380 million dollar deal comes in wake of “biblical” losses owners claimed by MLB owners in wake of the pandemic. Although some teams have deeper pockets than others, the Dodgers proved that nothing has changed by giving Betts this deal. Dodger’s ace Clayton Kershaw was a late scratch in the season opener and was placed on the IL with back stiffness. The 26 remaining MLB teams will be on the field today, with most teams getting their first taste of a meaningful game since last September.

While the revitalization of baseball is a sight for sore eyes, it comes with its quirks. Some teams have begun placing cardboard cutouts with pictures of fans in their seats coupled with fake crowd noise pumped through the stadium. Official scorers are working from home and broadcasters will be relaying road games from the booths of their respective home fields. Players must adhere to strict protocols if they hope to keep themselves and their teammates COVID-free, while testing for said virus is now a new part of their routine. However weird it is, the great game is still being played for the time being, and hopefully we see it through to October.

Commissioner Robert D. Manfred also confirmed yesterday that 16 teams will be included in an expanded postseason this year. Normally only ten teams make the cut, but a 16-team postseason will mean over half of the squads in Major League Baseball will be included in the new, crowded format. Eight teams will compete in a Wild Card Series consisted of second place teams in each division and the teams with the next best record. Under the new system, which will only be in effect for 2020 at this time, the postseason will commence on Sept. 27 and be completed before November as usual. The owners and players agreed to this change and it was likely in the interest of teams gaining extra revenue from exclusive TV deals with TBS and ESPN.

Players normally receive a share of gate revenue during the postseason, but without fans that revenue will be next to nothing. It would be wise to look at ways to allow at least a fraction of fans to attend games since stadiums are open air and have the room to social distance. Why people are able to crowd in airplanes full of recycled coughs and germs but not allowed to social distance at a baseball game? Perhaps someone should have asked Fauci that after he threw out the first pitch last night.