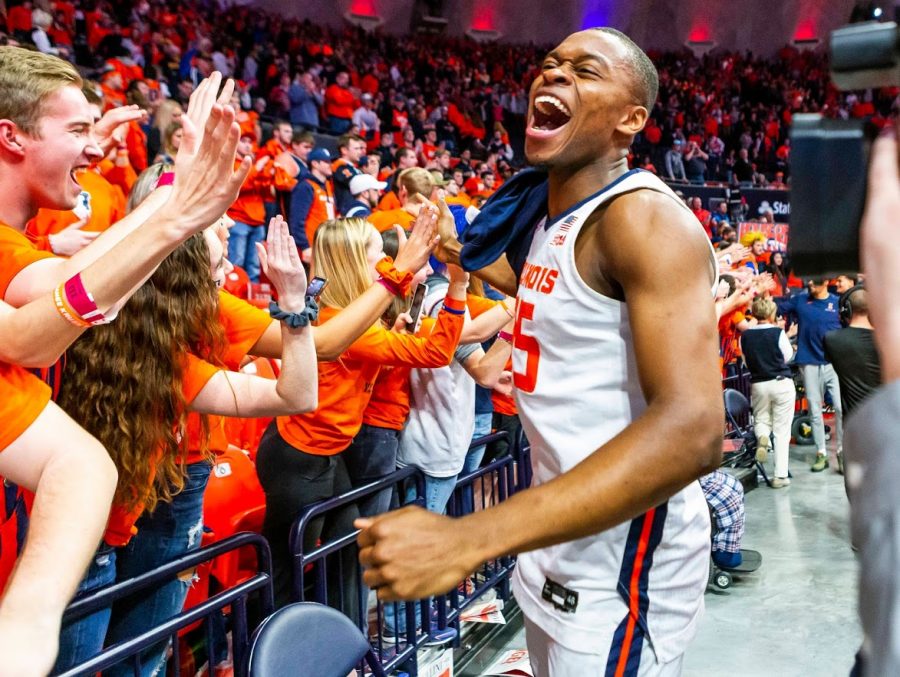 Students in the fan section high five senior Samson Oladimeji at the basketball match against Iowa on March 8.

Illini Pride is one of the biggest student organizations on campus and also the biggest sports fan on campus. They pack the student sections at Memorial Stadium, Huff Hall and State Farm Center to cheer the Illini at every home game. However, with COVID-19 still around and restrictions on groups of people gathering in one place, Illini Pride will look different this upcoming fall.

After a meeting in early July with the Division of Illinois Athletics, discussing Illinois Governor  J.B. Pritzker’s Phase 4 guidelines. Illini Pride got a better idea of how they will function for this upcoming season of fall sports. However, things are still not set in stone as there is still much planning to go.

There will be a few changes to Illini sports, with it affecting football the most with no tailgating before games and Memorial Stadium will be at 20% capacity.

To combat the problem, Illini Pride will be offering a new Illini Pride membership. It will cost $50 with $25 going to Illini Pride to help boost the environment for students and the other $25 to the Krush Foundation as a donation.

One of the perks of getting an Illini Pride membership is that you are automatically put into a football lottery for every game. The system will choose based on the maximum number of seats available in the North student section. When entering the lottery, members can sign up in groups ranging from two to 10 people.

If your group is chosen for the tickets you then have to purchase them for about $10 each. The lottery will allow an opt-in and out so if you are busy one weekend or going home then you can take yourself out thus giving a better chance to others.

“I think about every Sunday night you’ll have to confirm you’re in the lottery and then it will probably draw Monday or Tuesday and then you’ll get your tickets (if you are chosen) and go to the game,” said President of Illini Pride Mark Coyne.

Once basketball season comes around it will follow this same format that football did.

With about 500 to 1,000 students packing the student section, everyone will still have to follow social distancing guidelines.

“There will be blocks of ten and then in between every 10 seats will be six feet in between those sections,” Coyne said.

While not everyone will not be guaranteed a spot in the stands, Illini Pride is still working on creating events where students can cheer on the Illini, but can’t attend the games. Vice President of Block I John Sullivan and his Block I team are looking into hosting watch parties.

“We’re currently looking into the possibility of Illinois watch parties,” Sullivan said. “So students who have the Illini Pride membership will be able to go to these watch parties and get free food, free non-alcoholic beverages, and hang out and watch the Illini play.”

Plans should be finalized by the beginning of August, but Illini Pride still has to work with the University on where these watch parties will be, whether inside or outside.

“As of now I predict some will be in Huff Hall, inside the Ikenberry Commons, or the Armory,” Sullivan said. “Like somewhere that’s close to the football stadium.”

One of the traditions at football games is card stunts, however with gaps in the stands and not nearly as many students it will be difficult to do them.

“We’ll probably have about 50 people max for the card stunts, and they will be socially distanced,” Sullivan said. “Then when people come in (Memorial Stadium), masks will be required, and we’ll hand each individual their cards so there’s reduced contact.”

Illini Pride and Block I will be heavily relying on pre-game and watch parties to get everyone excited and pumped for football since everyone will not be in the stadium by offering free stuff.

Another event Block I will be offering is sideline sessions. It gives students a way to interact with Block I through some physical activity during the week.

“In previous years we had events such as punt golf where we would set up trash cans around the football stadium so people could punt into the trash cans basically like mini golf in a way,” Sullivan said.

For the smaller fall sports like volleyball and soccer, Coyne said it will be interesting to see how they will function as the leaders for those who are usually first-time executive board members.

“They’re going right in a difficult situation and they’re all excited to see what they can do and make the best of it,” Coyne said.

One of Pritzker’s guidelines says that there cannot be general admission events. So sports that didn’t sell tickets may have to be ticketed now.

“We’re going to figure out a way to get a student section for soccer and volleyball to allow students in,” Coyne said.

With no lottery for the smaller sports, Coyne said Illini Pride will receive a specific amount of seats and from there it will either be a first come first serve or reserve your spot through a Google Form.

“We plan to be fully involved as much as we can with the team (Illinois) and we’re going to support the team,” Coyne said. “Everybody on our exec board views Illinois Athletics as something that can unite everyone on campus, and we can all bond together and support one cause. We’re going to try our best to make that happen this year and support our team any way we can.”