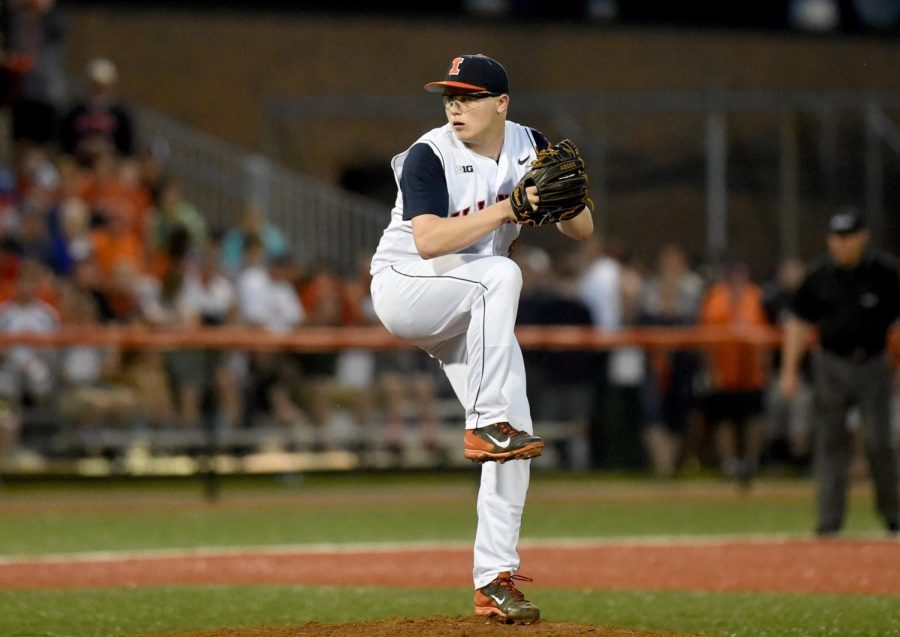 Junior Kevin Duchene winds up for a pitch during competition in the 2015 season.

Looking at the Illinois baseball team’s success over the years, quality starting pitching is a consistent factor in each winning season. Head coach Dan Hartleb will have to work his magic to shore up a thin starting rotation for the 2021 season. However, if Hartleb’s past work says anything, it’s that the Illini are in good hands with their ability to groom current players into larger roles and recruit valuable newcomers. With that in mind, let’s look at some recent standouts the Illini’s starting rotation has featured.

One of the best starting pitchers in Illinois history, Kevin Duchene pitched at Illinois Field from 2013-2015, registering 238.1 innings pitched with a 2.11 earned run average. The left-hander started 15 games during the 2015 run as a junior, which culminated in a complete-game victory against Ohio in the Champaign held regional. Duchene was also on the mound when the Illini clinched the 2015 Big Ten Title vs. Nebraska and was eventually named to the All-Big Ten First-Team as a starting pitcher. In his inaugural season, the Joliet native also took home the Big Ten Freshman of the Year award after tossing 80.2 innings and winning nine games.

These impressive accolades landed Duchene a fifth-round selection by the Oakland Athletics in the 2015 draft. Unfortunately, Duchene’s Minor League career ended with a 100-game suspension in 2017 and was released by the A’s soon after. Duchene’s time at Illinois was prosperous while it lasted, and he holds the second-best career ERA in Illinois history, behind his former teammate Tyler Jay.

During four full seasons pitching for Illinois, John Kravetz logged the most innings of any other man in school history with a substantial 337 IP. During 56 starts, Kravetz also sported a respectable 3.87 ERA with 181 strikeouts from 2012-2015. Another member of the prominent 2015 squad, Kravetz shined in his senior year and was named Third-team for All-Big Ten after finishing the season undefeated. He took a no-hitter into the eighth inning in his season debut against Lamar and threw the only complete-game shutout of his career in the Big Ten Tournament against Michigan State.

After the Super Regional run, Kravetz signed a free agent contract with the Toronto Blue Jays but only played for the remainder of that year before his release in November of 2015. Since then, Kravetz has not played baseball professionally, but like Duchene, he will forever be a major part of Hartleb’s distinguished 2015 team.

The all-time strikeouts leader for the Illini with 292, Brett Weber completed three straight seasons with 13 starts or more and at least 89 strikeouts in each campaign during his collegiate years. A weapon in the rotation, Weber led the team in strikeouts in 1998 (99) as a senior when the Illini were Big Ten Champions and made an NCAA tournament appearance. Drafted twice by the Phillies and Yankees in 1997 and 1998, respectively, Weber signed with the Yankees after the conclusion of his senior year.

Weber spent parts of three seasons in the Minors before stepping away from his playing career following injuries and a stint in independent ball. In 2009, Weber received a call from the Yankees general manager Brian Cashman, who offered Weber a job in a duel role between the Major League coaching staff and the front office team. Since then, Weber has been a major factor in the Yankee’s success in the 2010s and currently serves as the team’s advanced scouting director.