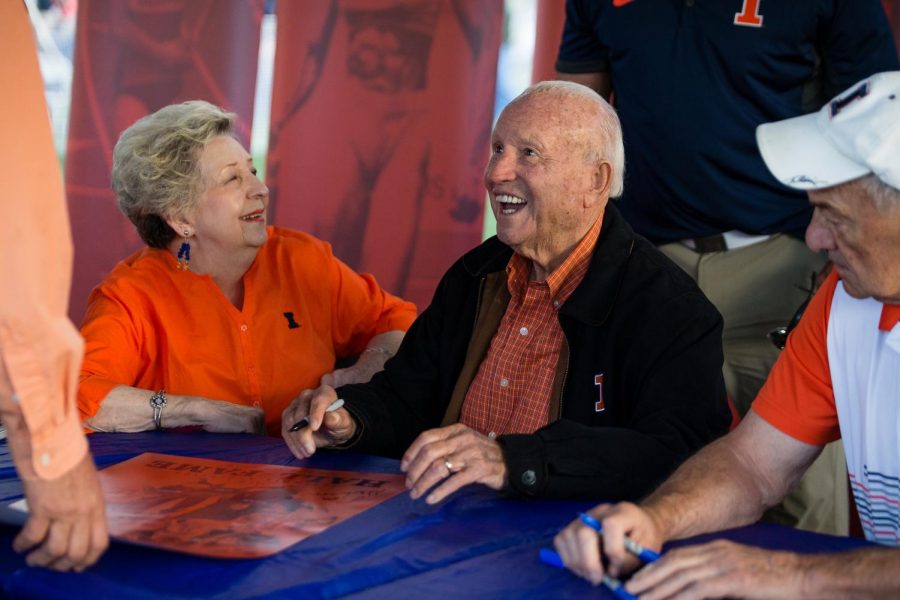 Lou Henson is not only a legend in the Illinois and New Mexico State basketball communities but in all of college basketball. Henson, who passed away Saturday at the age of 88, will, more importantly, be remembered as a man of kindness and grace.

He took both the Illini and the Aggies to the NCAA tournament’s Final Four, becoming only one of 15 coaches to ever lead at least two teams to a Final Four. Henson also remains the winningest basketball coach at Illinois and New Mexico State, both schools having named their stadium’s court after him.

Many of his former players, opponents, coaches, media members and friends shared their thoughts and memories with him on social media Wednesday.

The pleasure was mine, Coach. You made everything you touched better, my life included. We already miss your smiling face and your welcoming nature, but we will find solace in your memory, which will never be forgotten. Rest easy, Coach. 🧡💙 pic.twitter.com/BXhf1SqY9l

“Our Orange and Blue hearts are heavy,” Whitman said in the press release. “We have lost an Illini icon. We have lost a role model, a friend, and a leader. We have lost our coach. Coach Henson may be gone, but the memories he provided us, and the legacy he created, will last forever. He was responsible for almost 800 wins in the record book and countless Fighting Illini moments frozen in time, but Coach Henson’s true measure will be felt in the lives he touched – the lives of his former players, people on this campus, and friends in our broader community.”

“We are all better for whatever time we were privileged to spend with Coach Lou, whether it was five minutes or 50 years. He made everyone feel like a friend. I so enjoyed my time with Coach these last five years, and I will miss him. Our thoughts and prayers are with Mary, Lisa, Lori, Leigh Anne, and the entire Henson family. Their family will always be part of ours.”

Illini head coach Brad Underwood also honored Henson in the press release and on Twitter. Underwood has sported the iconic orange jacket, first worn by Henson when he coached at Illinois, multiple times in his Illini career.

A sad day as we mourn the passing of Lou Henson, the greatest coach in Illini history. My thoughts are with Mary, their family & the hundreds of players who were led by such a tremendous man & coach.

Rest In Peace to the best to ever wear the orange jacket; we’ll miss you Coach. pic.twitter.com/UNiQhxAuWC

“It is a sad day for the Illinois Basketball family and Illini Nation as we mourn the passing of Lou Henson, the greatest coach in our program’s proud history,” Underwood said in the press release. “His achievements are legendary, but what is immeasurable are the countless lives he impacted during his 21 years in Champaign and 41 years in coaching. My thoughts and prayers are with his wife Mary and their family, and the hundreds of players who were fortunate enough to be led by such a tremendous man and coach. Rest in peace to the best to ever wear the orange jacket; we’ll miss you Coach.”

Several former Illini took to Twitter to remember Henson and express their feelings about the Hall of Fame coach, including three of Henson’s players.

Stephen Bardo, now a college basketball analyst, was a key piece to Henson’s Flyin’ Illini squad. Bardo was the 1989 Big Ten Defensive Player of the Year and scored 909 points and dished 495 assists during his career as an Illini. Henson, of course, made an everlasting impact on the former NBA player.

“Hearing the news of my college coach Lou Henson passed away over the weekend! Lou taught us a ton of lessons that really kicked in as adults,” Bardo said on Twitter Wednesday morning. “Truly underrated coach and a great man. Rest easy Coach!”

Eddie Johnson, who spent 17 seasons in the NBA, was a part of Henson’s early days at Illinois. The small forward began his Illinois career in 1977, Henson’s second season as head coach of the Illini. Johnson posted a series of tweets Wednesday afternoon remembering his former coach.

“So sad to hear that the best coach I ever had has moved on,” Johnson said in a tweet. “Lou Henson was royalty to me. He took me and shaped me and sent me on my way, but was always available to reset me when I was off. He and his Wife Mary took their first vacation since he had become a coach to attend my Wedding in 1985, I loved that man and he will never be forgotten….”

I just spent the day with this great man and Mary last September. Lou Henson fought like no other in regards to his health, just like he fought for every player that played for him. 🙏🏿RIP coach. @IlliniMBB pic.twitter.com/dA27crbruK

Deon Thomas, one of the Illini’s most decorated players of all time, played for Henson from 1990-1994 and helped lead the ’93 and ’94 team to the NCAA tournament. Thomas is now an Illinois basketball radio analyst and still holds the all-time scoring record for the Illini. He tweeted a heartfelt message about Henson Wednesday evening.

This is a sad day for me, my family and Illini Nation. Lou Henson changed the direction of my life and that of my family. I can’t thank him enough for what he did for me and my Illini brothers. Rest with the angels coach. 🙏🏾 pic.twitter.com/bDFShlLkDf

Deeply saddened by the passing of one of the greatest coaches I’ve ever had the pleasure of meeting, Lou Henson.

A true Fighting Illini, who made a lasting impact on all those who had the great fortune of meeting him. My thoughts & prayers are with Mary & their family. pic.twitter.com/I5eZwOiZDM