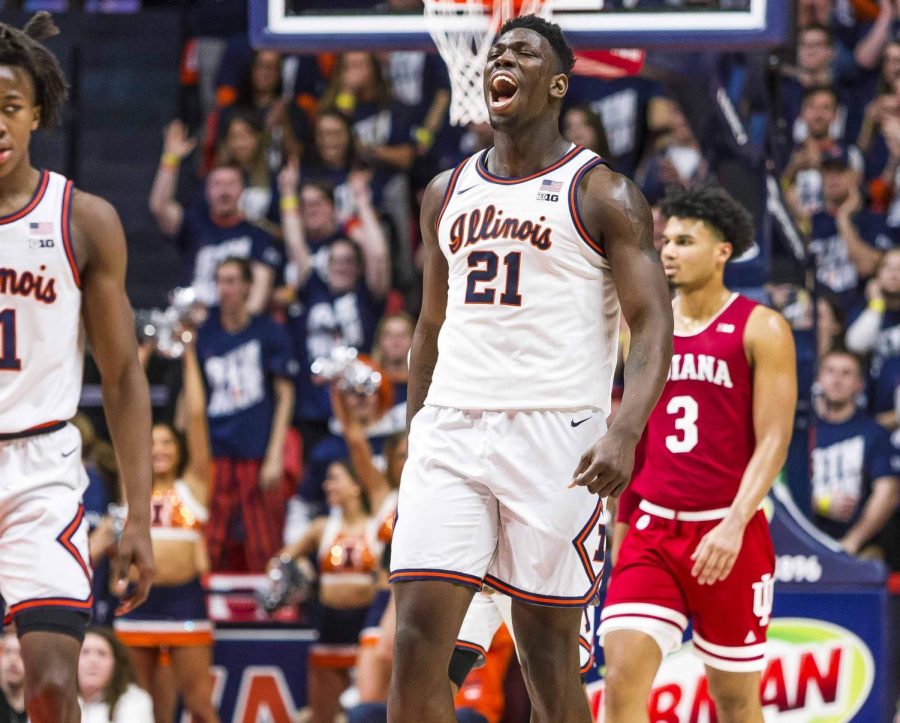 Freshman Kofi Cockburn celebrates during Illinois’ game against Indiana on March 1. The Illini beat the Hoosiers 67-66.

Less than 24 hours ago, Ayo Dosunmu dropped a bombshell by announcing his withdrawal from the NBA Draft and his return to Illinois for a Year 3. Today, Kofi Cockburn did his part in exciting the Illini basketball fandom by announcing on Twitter he will also forego the draft and return to the Illini for his sophomore season.

The Big Ten Freshman of the Year played a large role in Illinois’ first 20-win season since 2013, averaging 13.3 points per game on 53.2% shooting from the field. Cockburn recorded 12 double-doubles in his freshman campaign, doubling the previous freshman season record at Illinois. He also ranked fourth among all NCAA freshmen in rebounding, averaging 8.8 per game.

Both Cockburn and Dosunmu decided to test the NBA waters this spring following the cancellation of the 2020 March Madness tournament. Earlier this week, Dosunmu had confirmed he received an invite to the NBA combine, but Cockburn did not.

With the return of Illinois’ two top scorers, head coach Brad Underwood will have his deepest roster yet. Dosunmu and Cockburn will rejoin seniors Trent Frazier and Da’Monte Williams, junior Giorgi Bezhanishvili, sit-out transfers Austin Hutcherson and Jacob Grandison and will begin working with the highly-touted freshmen guards Adam Miller and Andre Curbelo.