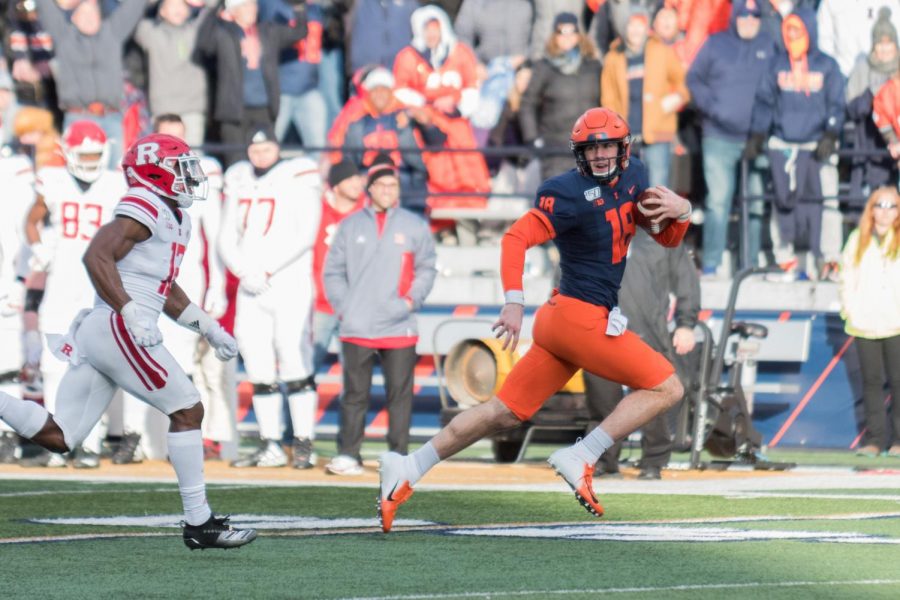 With an offense expected to shine with 10 conference games to play, Illinois has a lot to look forward to this upcoming football season. Despite numerous amounts of uncertainty regarding the 2020 season, the Illini have begun training camp and are preparing for their season opener on Sept. 3. Although camp is underway, it’s looking very different than it would be during a normal season.

Coach Lovie Smith and his team started camp this past Thursday without pads, only a helmet on with a jersey and shorts. Saturday was supposed to be the first day pads were worn and full contact was made, but due to further talks between Big Ten Presidents regarding player safety during the pandemic, the players once again practiced without pads.

“The approach we take each day is whatever we’re presented with, we’re going to do,” Smith said. “We found out about an hour and a half before (about no pads), but that was plenty of time for us to adjust.”

The Illini are prepared to practice without pads for the near future and are ready to transition to pads when allowed. Assuming the season does start on time, fans will get to see what is believed to be the best Illinois offense since Smith became head coach.

The offense starts with senior quarterback Brandon Peters. Though inconsistent, Peters proved himself capable last year by displaying talent in key moments, leading Illinois to its first bowl game since 2014. But with a year under his belt as a starter, the second year Illini is already taking steps to improve his play on the field and have an impressive final season.

“(Brandon Peters) has been sharp. He has been on point with his throws. He is on a different level than he ever was last season,” said offensive coordinator Rod Smith. “When Brandon speaks, everyone listens.”

Getting teammates to see you as a leader is important for a quarterback to achieve, and Peters wants that role. After spending his first year with the team getting used to the environment, the senior has put in the effort to earn the respect of those around him and become a true captain.

“It starts with the QB and we are in great shape,” Lovie Smith said. “Brandon is not going to be the guy to hoot and holler, he is going to be a leader. He was one of the first guys back this summer. He has put a lot of time to get into this position.”

Along with the passing game, the rushing offense is again expected to produce at a high rate for the Illini with two returning threats. Rod Smith lost quick-moving Reggie Corbin and highly-efficient Dre Brown to graduation after last season, but he still has plenty to work with.

Junior Mike Epstein, who tore his ACL in the first game of 2019, is fully-healthy and has a lot to offer for the Illini this season. Sophomore Chase Brown, who Illini fans didn’t get to see much of during the 2019 season, has high potential and will see the field more this year.

“I think Mike (Epstein) is different. He makes us different, he makes us complete,” Rod Smith said. “(Chase Brown) is someone that we’ll want to get a better look at… Chase is looking good and runs very well.”

Brandon Peters has pieces to throw to and the backfield for Illinois looks promising, but the most complete part of Illinois’ offense could be Peters’ protection: the offensive line. With four returning starters and an addition via transfer, the Illini look complete in their blocking.

Senior right tackle Alex Palczewski could be the best Illini to enter the 2021 NFL draft and was an All-Big Ten third-team selection during his junior year. Doug Kramer returns for his senior season and has been talked about as one of the best returning power-five conference centers. Junior Kendrick Green is one of the strongest and most physical guys that the Illini have and could set himself up to be an early-entry for the 2021 NFL draft. Senior Verdian Lowe has had a very up and down Illinois career but is the sure-fire left tackle after a productive junior year and looks to become a draft prospect. Blake Jeresaty, a senior transfer from Wofford, has been added into the mix to play right guard. Though undersized, Jeresaty was an FCS All-American last season and showcased his talent during an impressive matchup against Clemson.

With an offense that could be Illinois’ best in years, the Illini look to compete with some of the best defenses in the Big Ten. Unfortunately, there are still questions to be answered and some uncertainty of a season at all. The Middle Atlantic Conference, or the MAC, postponed their football season Saturday morning, but the Illini are still preparing to start on time and Rod Smith says the coaches have put pressure on their players to do their part in making a season happen.

“We’ve just gotta do our part moving forward daily, and our guys have been doing a very good job,” Rod Smith said. “We control here while we have it, where we get concerned is once they leave here. Players have got to take responsibility to make sure they’re in the right areas and around the right people… There’s so much at stake here and one person could get infected and infect the whole team so it’s super important how we prepare.”

Nothing is for certain. If players and coaches do their part around the country to make football a safe game to play, though, this could be the best Illinois football team since the Lovie Smith era began. Peters and the Illini are scheduled to play the first college football game of the season this year, as they host arguably the best team in the country. Ohio State will come to Champaign on a Thursday night to kick-off the season under the lights.