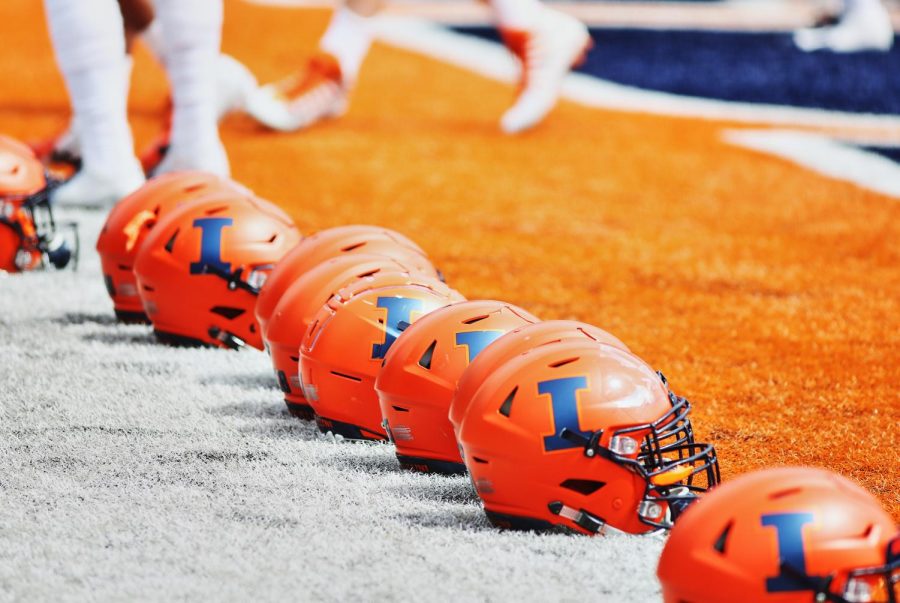 Illinois football helmets line up at the end zone at Memorial Stadium during football spring training on April 13, 2019.

The Big Ten will reportedly not be playing college football this fall.

After just four days of official training camp, the Big Ten Conference has postponed their 2020 Fall sports season, according to a report by the Detroit Free Press. The report came Monday morning after several meetings between Big Ten Presidents throughout the past few days. The Big Ten is expected to make a formal announcement Tuesday. The report also stated the decision came from a 12-2 vote from the presidents; Iowa and Nebraska were the only schools to vote in favor of playing.

Saturday morning, The Mid-American Conference became the first Football Bowl Subdivision conference to postpone fall sports. Speculation began immediately about other schools postponing sports as well, and the Big Ten has now seemed to have followed.

The decision to postpone fall sports took time and clearly wasn’t easy, and though it is due to health and safety concerns for players, many student-athletes seem unhappy with the decision. Several college football players have posted their thoughts about a season on social media, and many well-known athletes seemed to be in favor of a season.

Ohio State junior and Heisman-hopeful quarterback Justin Fields has been one of many star athletes to post “#WeWantToPlay” on Twitter. Several Illini, including junior tight end Luke Ford, have posted the phrase as well. Ford had also been posting several pictures of him wearing a mask over the last week, trying to do everything he could to make a season happen.

After postponing their fall season, the MAC said they do plan on having a spring football season, although no plan has been introduced for the spring thus far. The Big Ten also did not display any type of plan for a spring season.

The outbreak of COVID-19 has been interfering with sports ever since the NBA was postponed back on March 11, and now almost five months later all sports are still finding difficulty to run smoothly.