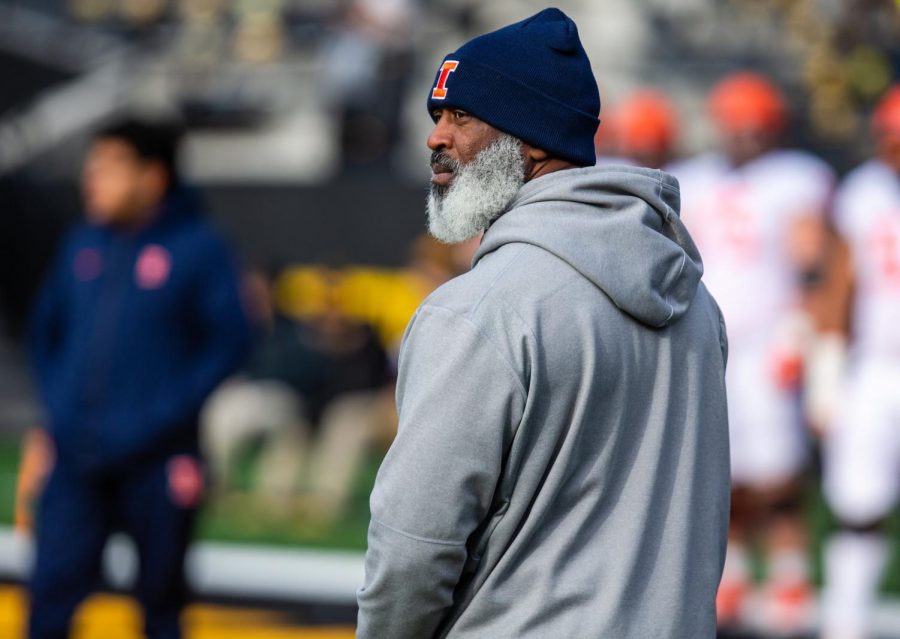 Head coach Lovie Smith stands on the sidelines during Illinois’ game against Iowa on Nov. 23. Saturday, Illinois fell to Northwestern 29-10 on Senior Day, closing out the team’s regular season. Captured at Kinnick Stadium on 23 Nov. 2019 by Jonathan Bonaguro.

Despite a number of reports on Sunday that the Big Ten would cancel football for the Fall 2020 season, the conference has yet to put out an official statement on whether or not football would be played.

All the uncertainty surrounding the season leaves players, coaches, and fans with countless questions about the sport, but training camp for the Illini has gone on as instructed.

“Long in advance we have a schedule on how we’re going to handle training camp, and that’s what we’ve stuck to,” said Illini head coach Lovie Smith on Tuesday afternoon. “Of course we understand what’s going on with college football right now … But as I told the team, we’re going to focus on what we can control.”

Player safety is the number one concern for a potential cancellation of the season, and the Illini have seen just one of their players choose not to play. Junior running back Ra’von Bonner decided to opt-out of the season due to his concerns regarding playing during a pandemic.

Although Bonner decided to sit his junior season out, none of his teammates have followed him in doing so. Several Illini players have posted their willingness to play on social media, and coach Smith says those that are on campus feel safe and are ready to get on the field for a season.

“If a player didn’t want to play this year, he’s opted out,” Smith said. “The guys that are here right now want to practice, want to play … I think it’s as safe here as it is anywhere.”

Smith and his coaches have been in constant communication with athletic director Josh Whitman and other administration regarding any news or instruction regarding the pandemic, making it easier for the team to stay focused during practice. Despite their full focus being on the field, possibilities of what to do if the Big Ten does cancel the season have been discussed.

“Like everyone, we’ve been meeting and planning for different scenarios,” Smith said. “We worked on a plan for college football and the things that could possibly be happening to us for a long period of time.”

The plan right now for the Illini is to play football this season, solely due to the fact that the coaches and players feel it is safe to do so. Smith has fully understood other people’s concerns regarding the season and that playing this year isn’t for certain, but until he hears differently from the conference he is planning on advancing in practice and into a season.

“I trust the league. If our league thought that we were putting our players at risk then we wouldn’t be going through this right now,” Smith said. “If there is information that says no we can’t play, that’s one thing … Until we see (it is unsafe to move forward) we’ll stop, but that’s not what we’ve seen so far.”

Even with reports of a season being canceled, practices have moved on and both players and coaches around the country have continued to express their willingness to play. Many Big Ten coaches have released statements regarding their thoughts on a season, but not Lovie. Word should be out soon as to whether or not the Big Ten will have a season in 2020, but until then, Smith has made his thoughts very clear on how he feels about playing.

“I’m not one to make statements, it’s a little bigger than statements,” Smith said. “I, like everybody else, would like to play … I don’t know how many more times we have to say that.”