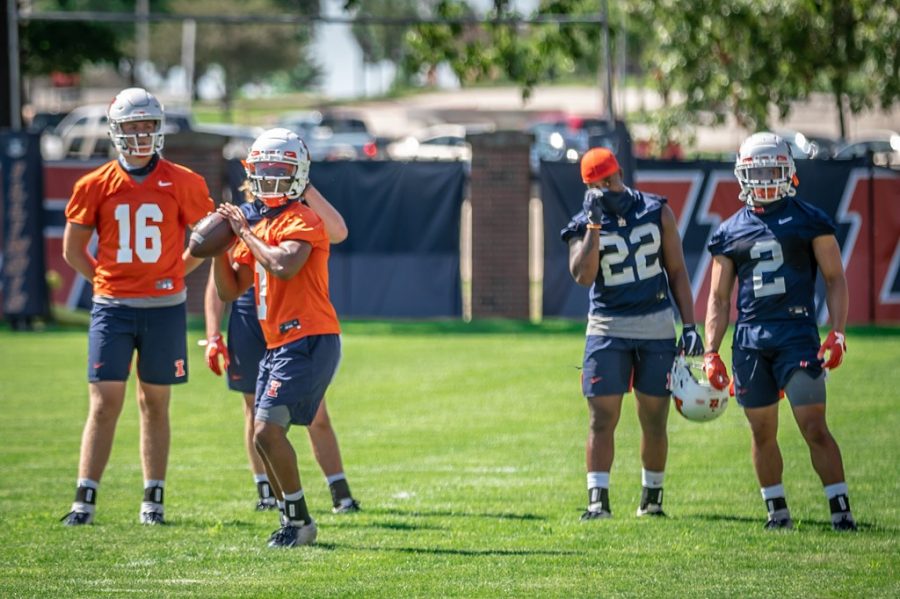 Redshirt freshman Isaiah Williams throws the ball during a drill at football practice on Aug. 7.

Huff Hall, Demirjian Park and Memorial Stadium are going to be empty this fall. The Illini won’t be competing against other Big Ten schools after the conference announced the cancellation of all fall sports Aug. 11. The Pac-12 conference followed suit later that day, and the remaining “Power 5” conferences — the Big 12, Atlantic Coast Conference and Southeastern Conference — are scheduled to play this fall, despite the conference’s footprints including some of America’s most active COVID-19 hotspots. The Illinois teams most affected by the cancellations are volleyball, soccer, men’s and women’s cross country and football.

The conference has come under fire for calling off sports, and Big Ten Commissioner Kevin Warren wrote an open letter Wednesday that explained some of the rationales behind the Big Ten’s decision. Illinois athletic director Josh Whitman expressed his support for the Big Ten’s decision in an Aug. 12 Zoom press conference, and Chancellor Robert Jones agreed with the conference’s decision during an interview with CBS2 Chicago anchor Ryan Baker on Friday. Jones was scheduled to speak about the decision Aug. 12 but canceled just before the press conference, and his interview with Baker was the first time he had publicly spoken about it.

Though several conferences are still playing, the NCAA has given an additional year of eligibility to fall athletes, but schools like North Carolina and Notre Dame have halted practices as COVID-19 cases have spiked on their campuses, and the universities shifted to all-online instruction. Illinois has among the most detailed COVID-19 testing regimens of any university, and the Illinois Athletics Twitter account stated in an infographic that the campus has 1-2% of the United States’ testing capacity.

The NCAA also has recommended pushing championships to the spring, and a number of Division 1 conferences have pulled the plug on fall sports.

Even though sports aren’t actively competing, teams are still together and practicing. Here’s what every team is up to:

Football: Not much has been sent out via social media since the Big Ten’s announcement, but Whitman and head coach Lovie Smith held a press conference Aug. 12. The team’s content has included commemorating the one-year anniversary of the Smith Center opening, but also saw linebacker Milo Eifler, defensive back Nate Hobbs, wide receiver Josh Imatorbhebhe, center Doug Kramer and quarterback Brandon Peters included on the Senior Bowl Top 250 list. The team was set to resume workouts Monday.

Volleyball: The team has continued to practice since the season got postponed. Their Twitter account has posted photos and videos of the team’s practices, a tweet featuring player reactions to the cancellation on Instagram and birthday wishes for junior defensive specialist Taylor Kuper and sophomore middle blocker Kyla Swanson. Volleyball may have a season in the spring, and head coach Chris Tamas said he “would not be concerned” if the sport had two seasons in one calendar year in an Aug. 13 press conference.

Soccer: The team is still practicing, and its Twitter account has posted photos and videos from team practices. The soccer program was set to begin competing at Demirjian Park this year, but the project has been delayed. Head soccer coach Janet Rayfield said in an Aug. 13 press conference the project should be complete by late October. Soccer might be played in the spring, which would allow the team to play games at the new field. The Illini spent most of last season playing on the field at Demirjian Park, but the building has not yet been completed.

Cross country: The team had a whirlwind the week of the cancellation. Athletes returned to campus Aug. 10, and the season was canceled Aug. 11. The women’s cross country team was coming off one of its best seasons when they made a trip to the NCAA finals. The team is back to going for runs and just finished its first week of practice. Head coach Sarah Haveman said in an Aug. 13 press conference that cross country can’t move to spring, as the cross country team competes in track events during that season.