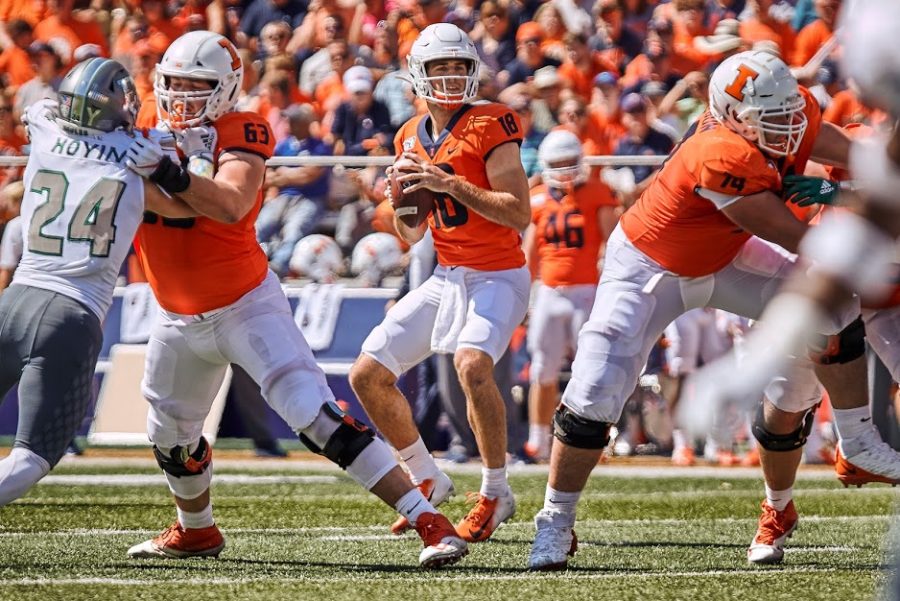 Senior offensive lineman Alex Palczewski protects senior quarterback Brandon Peters during the game against Akron on Sept. 14. The 2020 football season has been postponed to the spring due to COVID-19.

Illinois football fans have a lot to look forward to if they get to see a spring college football season. In what’s anticipated to be the best Illini team of the Lovie Smith era, there are many bright spots that will look to shine and compete with the best the Big Ten has to offer.

Senior quarterback Brandon Peters, a second-year starter and transfer from Michigan, will lead the offense and is expected to have a breakout season. He has targets to throw to, including the Imatorbhebhe brothers and junior transfer Luke Ford, but that isn’t all of the key pieces on the offensive side of the ball.

The Illini are expected to start four seniors and a junior on their offensive line this season. After relying on underclassmen more than ever the past few seasons, offensive coordinator Rod Smith has all upperclassmen to protect Peters. A spring season could benefit the offensive line the most of any position, not only to play a senior season but for multiple players to raise their draft stock for the NFL.

Doug Kramer, who has started 30 games over the past three seasons for Illinois, was rated by Pro Football Focus as the third-best returning center in the Power-5. Though undersized, Kramer has proven himself as one of the best linemen in the Big Ten and has emerged as a  team leader. With the potential to get drafted, the strong and speedy center knows he still has to improve to potentially get to the next level.

Lining up next to Kramer at left guard will be Kendrick Green. The only non-senior on the o-line, Green has as much skill as anyone. One of the better recruits in his class, Green has started 25 games in two seasons after redshirting his freshman year. As one of the strongest guys on the entire roster, the guard could end up playing his last season for Illinois in the spring and has the chance to enter the draft a year early.

The left tackle position belongs to Vederian Lowe. With questions about the depth at this position, there will be pressure on Lowe to hold his own and perform at a high level for the Illini in the spring. The pressure is nothing new to Lowe, though, as he was thrown into the rotation as just a freshman and has since become a more consistent tackle. An impressive senior season could see Lowe become a potential late-round pick in the NFL Draft.

Blake Jeresaty is one of many additions via the transfer portal for Lovie Smith and the Illini. After an impressive campaign at Wofford College and receiving FCS All-American honors, Jeresaty will play his senior season for Illinois and start at right guard. The other four members of the Illini o-line have been together for multiple years, and Jeresaty is the newest member of the team. Despite not having as much experience at Illinois, the rest of the guys have made Jeresaty feel a part of the team, led by his roommate, Alex Palczewski.

“(Alex) is a great guy,” Jeresaty said. “He’s been super successful in the field, and I respect a lot of what he’s done. He’s a great dude and has shown a lot of leadership and reached out to me when I was in the (transfer) portal … He’s just a great guy.”

Palczewski has the most experience of any Illini on the roster. He has 36 starts over the past three seasons and was a team captain last year as a junior. Most likely the safest bet for an Illini to get drafted, the right guard was an All-Big Ten third-team selection last year and looks to improve on that in his senior season. Despite his recent success, Palczewski also has a number of things he wants to improve on before the next level.

“My pass throw still needs a good amount of work just to be able to set an anchor in,” Palczewski said. “And then just changing up my body. I’m just training to gain muscle and lose fat. I don’t really care what weight I’m at right now. I want to look good and have that strength, that flexibility and have that power with me.”

Each member of the offensive line has experience and skill, which will trouble a lot of Big Ten teams come the spring. Though individual skill is important, the group knows how essential working as a team is and that they have to work together to be the best version of themselves.

Although the expectation was to play in the fall, an extended offseason gives this o-line even more time to improve its game and get ready for a difficult Big Ten schedule in the spring. With all five starters potentially leaving after this season, questions will loom about the Illini’s future depth throughout the o-line. But until then, Peters and the offense will be set up for success with an offensive line that will be one of the best in the conference.