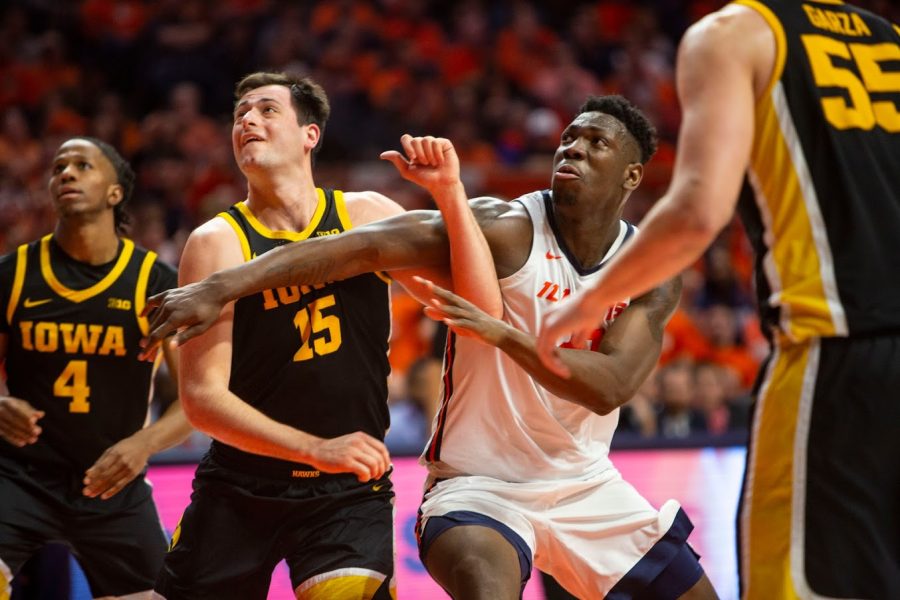 Sophomore Kofi Cockburn fights for position against Iowa’s Ryan Kriener during the game between the two teams at State Farm Center on March 8. The Illini won 78-76.

Before making his decision to return to Illinois for his sophomore year, Kofi Cockburn first had to go home. The imposing center went back to New York to weigh the decision with his mom and his brother, who played a huge role in Cockburn coming to the United States to play basketball. But Cockburn had another person he needed to talk to: teammate Ayo Dosunmu.

“I spoke with Ayo and he gave me some good insight,” Cockburn said. “That gave me a way better idea of what I wanted to do after that.”

Dosunmu then told Cockburn that there was a possibility he would return to Illinois for his junior season.

“That’s when the ‘what if’ came in,” Cockburn said. “What if we both came back?”

Dosunmu announced his return on July 31 and less than 24 hours later, Cockburn announced he would also return to Champaign. Cockburn’s freshman season certainly met expectations. He was a nightly double-double threat, averaging 13.3 points and 8.8 rebounds per game. He flashed some defensive prowess, blocking 1.4 shots per game as well.

Using his nearly 7-foot, 290-pound frame, Cockburn excelled. He was fourth in the Big Ten with 34 dunks and shot 68% on “close twos,” per Barttorvik. But, Cockburn struggled as a jump shooter. He made zero three-pointers, shot 66% from the free-throw line and shot 27.5% on midrange attempts. But the reigning Big Ten Freshman of the Year has spent time on his shot this offseason.

“I’ve been shooting a lot lately,” Cockburn said. “It’s about getting reps up. Right now I feel really confident with my jump shot. Last year, I was a little laid back as a freshman. It wasn’t my place to just come out and shoot jump shots. Now that it’s better, I can step out and take a couple.”

Off the court, the Illini will also look for Cockburn to improve as a leader. Having a full season of play under his belt, Cockburn is now viewed as a mentor to others in the program. Head coach Brad Underwood said he’s already helped freshman center Brandon Lieb in practices.

Cockburn also wants to improve on his effort and consistency. He had his share of dominant games but also struggled at times against top tier opponents. He shot 2-10 in a road loss to Michigan State and was 2-6 in a loss at Ohio State. NBA teams made Cockburn aware of this in the pre-draft process. Cockburn’s size will always be there, but in year two he’s searching for the effort to match.

Despite his inconsistencies, Cockburn’s freshman campaign was an impressive one. With several elite big men out of the conference this year, making All-Big Ten is certainly in the realm of possibilities. Adding more individual hardware would be notable, but Cockburn’s goals for this upcoming season are team-oriented.

“My main interest is basically winning. To come back and win a national championship with these guys,” Cockburn said. “It’s just about winning, man.”