Demirjian Park set to be finished middle to late November 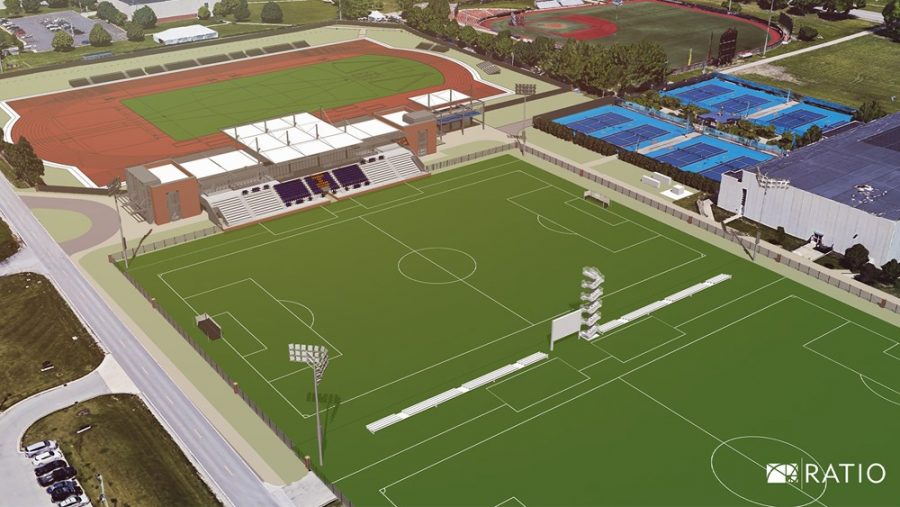 A graphic renders what Demirjian Park will look like post-construction. The facility will be shared by the Illinois soccer team and the men’s and women’s track and field teams.

After a year of construction, Demirjian Park is set to finish by the middle or end of November. The Illinois soccer team would have started their 2020 season on the new field, but due to COVID-19 and the Big Ten canceling fall sports, there is a potential chance for its debut in the spring of 2021. While the team did play on the new field last year, only the turf and scoreboard were finished.

The first floor of the stadium is considered the “athlete corridor” and will house the locker rooms for both the men’s and women’s track and field teams and the women’s soccer team. It will also hold the training and hydrotherapy room.

“The frame is up, obviously, the first floor, you can walk through and see all the different rooms and areas,” said Illinois soccer head coach Janet Rayfield. “Structurally it’s there, aesthetically and all of the different things that you do, the finishing touches and some of those things that take a lot of time are still left to be done.”

The focus is to get the ground floor done as soon as possible so the athletes can start using the space and move in as early as possible.

As for the second floor, it isn’t quite as laid out nor progressed as the first floor. So far the offices are only framed out and no walls are up yet.

“(Last week) I was able to stand in my office and look out what would be the big window that looks out over to the field and see what my view from the office was going to look like and get excited about that,” Rayfield said.

As the construction progresses, it brings a lot of excitement to the whole team. Redshirt sophomore defender Kendra Pasquale has heard a lot of what’s supposed to be in the facility. However, the thing she is most excited about is that it’s going to be a new home.

“Any student-athlete that comes through, it’s going to be a really cool thing that this is our facility, that we get to come and show up everyday,” Pasquale said. “I think as a family it’s a good safe space for student-athletes to come and have our locker room and lounge.”

Pasquale said that while the season isn’t happening, seeing the facility progress everyday helps motivate the team to work hard during every practice.

“I’ve never been blessed with seeing something being built like that everyday in front of my eyes,” Pasquale said. “This building is going to be an amazing facility, and I think the Demirjian family has truly blessed us with this.”

For senior midfielder Hope Breslin, she’s excited to finally have a place the team can call their own.

“We had our own locker room in the administrative building, we had a training room that was kind of shared with other teams,” Breslin said.

While Demirjian Park will be shared with the men’s and women’s track and field teams, each will have their own respective locker rooms.

Though the field won’t be used for any competition this year, Rayfield and the team are hoping for a spring season. However, the new turf won’t go fully unused, as the team is still practicing on it everyday.

Just last week, the team had their blue and orange exhibition, giving them a sense of what competition felt like with a near-end to construction at Demirjian Park.

Even though the turf, lights and scoreboard have been up and played on since last year, it still gives the team a taste of what is to come with the stadium being built around them.

“Playing under the lights with the scoreboard up, it kind of felt like a little game,” Breslin said. “I think as we go forward with these scrimmages we’ll be even able to put on our uniforms to make it that much better.”