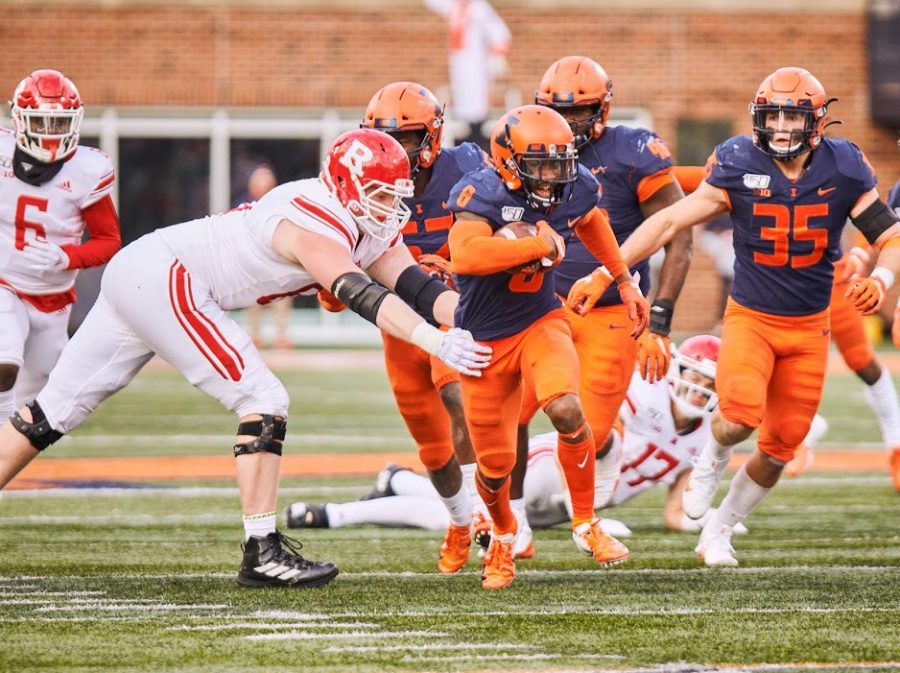 Senior Nate Hobbs returns an interception during the game against Rutgers on Nov. 2 at Memorial Stadium. The Illini won 38-10.

The Big Ten seems to be more unsure than any other conference about what to do regarding a college football start date. After commissioner Kevin Warren and the league announced on Aug. 11 that the fall season would be postponed to the spring, the Big Ten is now discussing a possible late-fall or early-January start to the season.

The Big Ten became the first Power-5 conference to announce the postponement of its football season, with the Pac-12 becoming the second the same day. The SEC, ACC and Big 12, however, still plan on playing in the fall.

Big Ten coaches met on a call Friday morning to discuss the possibility of pushing the start back up to around Thanksgiving or shortly after the new year rather than waiting until the spring. Fox Sports’ Bruce Feldman reported that the discussion emerged due to optimism in medical developments, therefore giving hope for an earlier season.

“B1G (Big Ten) coaches & ADs (Athletic Directors) are working with medical personnel to explore options for playing in the fall/winter based on medical parameters regarding transmission rates, testing breakthroughs and the numbers in those localities/campuses,” Feldman said via Twitter. “(The) decision will be made in the best interest of all 14 institutions.”

Six days after postponing the season, commissioner Warren issued “An Open Letter to the Big Ten Community” and stated the decision to play in the spring wouldn’t be revisited. League coaches met just 10 days after that to discuss a fall or January season start. Although all the talks right now seem to be between coaches, the vote would once again be left up to the presidents of each university.

“Obviously it’ll still be up to the Big Ten presidents to make the ultimate determination about when the conference opts to try and play — whether it’s in the fall or January,” Feldman said.

If a Thanksgiving start date were to be decided on, it would create many logistical issues on a national scale. This would mean the Big Ten would be starting significantly later than the SEC, ACC and Big 12, and there would be games played at the same time during completely different points in their seasons.

A start in early January, which would include playing in domes, is another option that’s being discussed. Similar issues come to mind because of the overlap in the season with other schools and the inability to play in bowl games.

Criticism of the initial postponement began immediately from members of Big Ten schools, especially from Nebraska, Iowa and Ohio State, the only schools that voted to play before the season was postponed. Nebraska coach Scott Frost even noted they would explore the possibility of playing elsewhere if the Big Ten chose not to play in the fall. Ohio State expressed their interest in finding a different way to play as well, but neither team seemed to find another option.

Additionally, eight Nebraska football players recently filed a lawsuit against the Big Ten over the postponement of the season. They argued that the decision was made prematurely and are hoping for the court to invalidate the league’s decision to play in the spring.

Whether recent discussions over an earlier start date stem from criticism, or medical developments, there is a minor possibility of football before the spring. There have been no further updates since the first meeting, but if one thing hasn’t been made clear, coaches and athletic directors in the Big Ten want football as soon as possible.