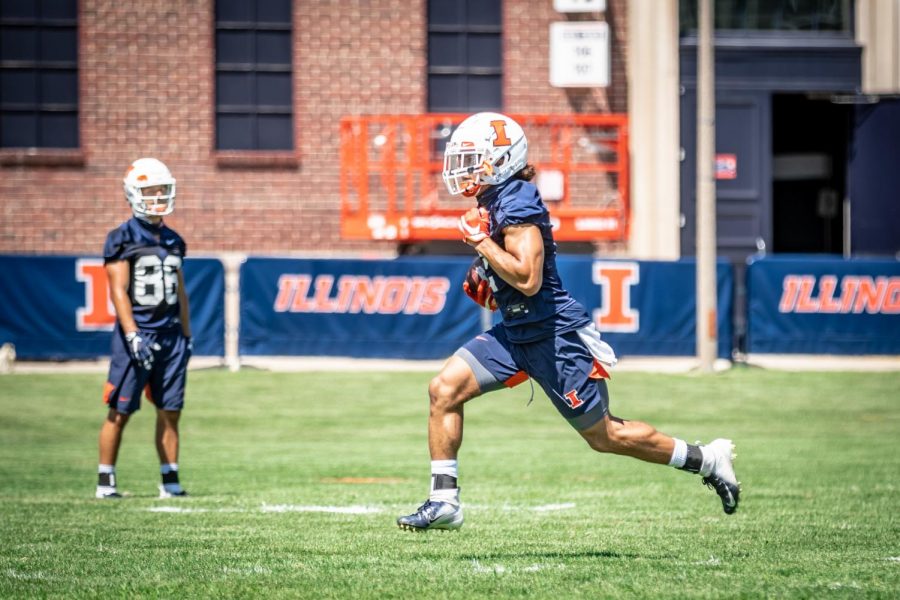 Illinois running back Chase Brown runs the football at training camp on Aug. 6. The Illini had their season postponed just five days later.

The Illinois football team should have spent the week preparing for a Thursday night kickoff at Memorial Stadium against one of the country’s best teams in Ohio State. Instead, the Illini spent the week resuming offseason workouts and practicing with no pads.

It’s been a somber few weeks for Big Ten football players. They saw their season postponed in the middle of morning training camp practice, remain uncertain as to when or if the 2020 season will be played and will now have to watch other Power-5 teams kick off within the next week.

“It’s frustrating if I’m going to be watching football on Saturday,” said senior running back Mike Epstein. “Just not being able to play will definitely be frustrating for the majority of the Big Ten, Pac-12 football players.”

Confusion about the Big Ten football season has only grown since conference commissioner Kevin Warren announced the postponement on Aug. 11. New potential start dates like mid-October, early November, late November or early January have been thrown around on social media with little evidence to support the claims.

Not only has this left fans and reporters confused, but for the first time in their careers, the players don’t even know if they should be preparing for games or an offseason.

“It’s a bit unsettling because I’m used to knowing, ‘oh, my team’s gonna start October 31 every year’, and that’s what I kind of prep myself mentally on,” said junior running back Chase Brown. “When they take that away and start making things a bit uncertain, it’s kind of frustrating. I want a set date and I want to know when I’m going to be able to play. It’s important to me and it hurts when they say something’s going to happen and it doesn’t.”

While every Illini football player is eager to play the 2020 season, Epstein and Brown have been waiting a little longer to get on the field. Epstein suffered a season-ending knee injury last fall in the team’s first game of the season against Akron, and he hasn’t played a full game for the Illini since October 2018.

Brown transferred to Illinois after his freshman year at Western Michigan. After sitting out the first five games due to NCAA transfer rules, Brown was granted an immediate eligibility waiver just two days before the game against Michigan on Oct. 12. Because of the limited practice time mid-season, Brown only had three carries in the four games he appeared in.

One thing Epstein and Brown do know is they’ll still be watching college football on Saturdays.

As lovers of the game, it would be hard not to sit down and enjoy watching the games and supporting their friends who will be playing, but it will still sting a bit.

However, Brown hasn’t completely given up on the thought of a season just yet.

“I’ll definitely sit down and watch them,” Brown said. “The thing I’m most interested in is to see how it works out. I know there won’t be fans there but I just want to see how guys are reacting to the situation when they’re put in it in a game. I watched a high school football game on ESPN last weekend and that stuff kind of gives me more hope when I see stuff like that for us having a season.”