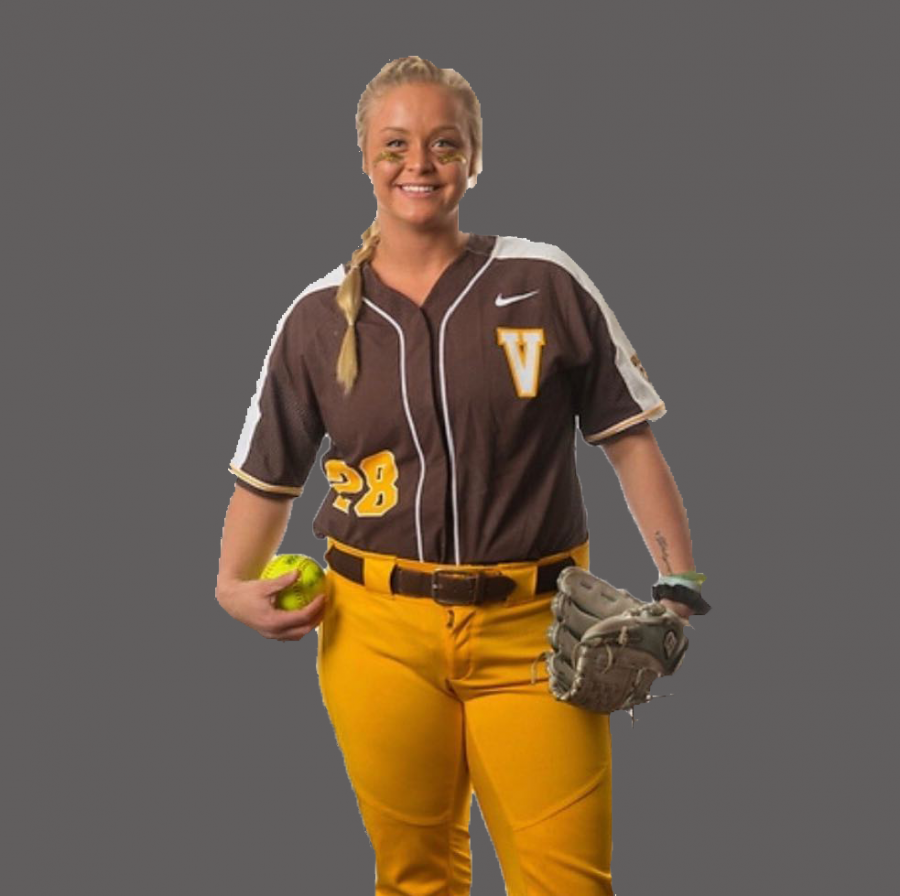 Kelsie Packard poses for a headshot when she was a pitcher at Valparaiso. Packard has recently transferred to Illinois to continue her softball career.

Kelsie Packard has been at Illinois for just a few weeks, though her enrollment at the University is the culmination of a college career that involved a couple stops along the way.

Packard grew up in Beloit, Wisconsin, about a three-hour drive from Champaign-Urbana, and originally signed a letter of intent to play softball at Florida Gulf Coast University. After signing, she realized the school wasn’t the place for her. The pitcher wasn’t able to break her letter of intent and instead began her college softball career at Rock Valley College, a two-year college in Rockford, Illinois.

“I decided (Florida) was just a little too far from home,” Packard said. “I went to Rock Valley, and I had a great time there.”

Once her two years at Rock Valley were up, she joined the softball team at Valparaiso. She finished her 2020 season with a 4-4 record and an earned run average of 2.17.

After wrapping up her undergraduate career at Valparaiso, Packard looked for graduate programs. She found she was drawn to the academic opportunities the University of Illinois offers in addition to its proximity to home.

Packard studied sports management at Valparaiso and is now studying recreation, sport and tourism at Illinois. She was deciding between Pittsburgh and Illinois, ultimately committing to the latter.

“I wanted to be able to play Big Ten,” Packard said. “I knew coming to Illinois, I was going to grow as a player and a person.”

Packard is the program’s second pitching transfer in the last year, as junior pitcher Addy Jarvis joined the Illini last January. Packard said Jarvis reached out and offered assistance with acclimating to campus soon after Packard decided to come to Illinois.

“Transferring (is) a hard process,” Packard said. “Right when I committed, she was one of the first people that reached out to me, and so she offered her help right away.”

Jarvis isn’t the only new teammate Packard knows. She played club softball for the Illinois Chill and said she knew senior utility players Katie Wingerter and junior catcher Shelby Stauffenberg before she came to campus. Wingerter transferred to Illinois in 2019.

Illinois pitching coach Lance McMahon said his program is constantly recruiting pitchers, and the program has placed a greater emphasis on it due to the cancellation and postponement of sports in the midst of the COVID-19 pandemic.

“You’re never not looking for pitching,” McMahon said. “I think with COVID-19, it’s made pitching a little bit more of (a) necessity (because) we don’t know how our schedule (is going to) pan out next spring, so the deeper you are in the circle, the better off you’re gonna be.”

McMahon added that his pitch to prospective pitchers is to focus on run support, but he tailors it depending on what players’ strengths are.

“I think for pitchers, specifically, it’s ‘Hey, come to a place where you can make an immediate impact and you’re gonna get a lot of run support,’” McMahon said. “For Kelsie’s sake, we were saying, ‘Hey, we have some good options, but you could really enhance our depth in (the) circle.’”

Though Packard has not been able to make much of an impact on the field yet, she has acclimated to her new home, and she still has two years of eligibility remaining.

“The softball program is just great here, and I’ve always wanted to compete for a Power-5 school,” Packard said. “Illinois seemed like the perfect fit.”