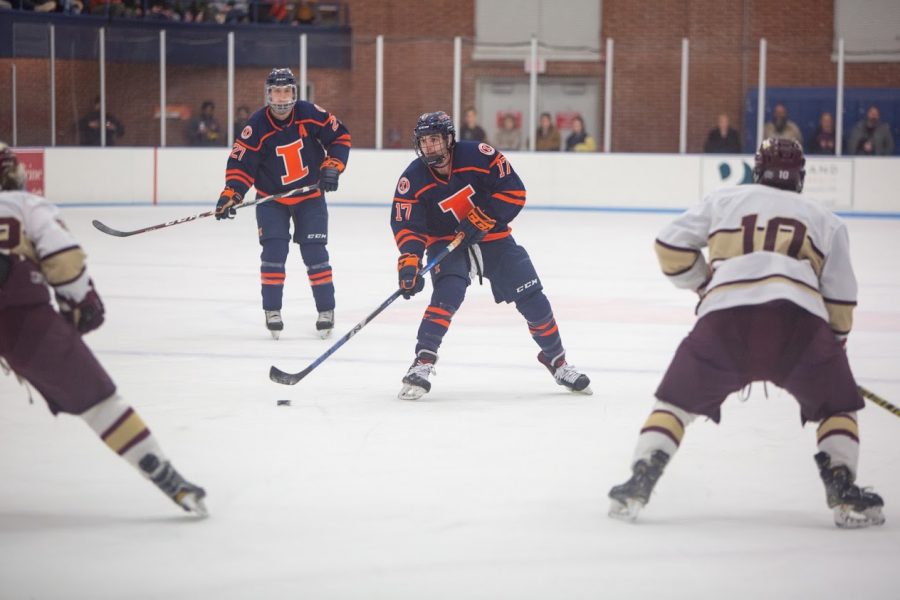 Senior Jon Moskaluk advances towards the goal during the game against Robert Morris on Feb. 29. The Illini won 7-1.

The state of Illinois currently has zero Division I hockey programs. Eventually, that number will increase.

Josh Whitman and the Illinois athletic department are still planning to add a Division I program, although the impacts of COVID-19 have significantly delayed the process of seeing the transition come into place.

“Really, there’s been no change since the spring,” said Associate Athletic Director Kent Brown concerning the hockey plans. “It was going quickly, then (COVID-19) struck. We’re just waiting for the dust to settle.”

Since 2017, rumblings about getting a hockey program have surfaced around Champaign. But what comes with actually securing a program with adequate funding and infrastructure takes years to come together.

Currently, Illinois sponsors one of the most successful club hockey programs in the nation, sporting 23 tournament appearances and two championships. But, comparing the two is like apples and oranges, as the club hockey team is under the jurisdiction of Illinois’ campus recreation, not the athletic department.

By getting a Division I hockey program, a new arena would be built from scratch, which would open the door for more than just hockey.

“(We would) have an arena in downtown Champaign,” Brown said. “(We) have partnerships with a lot of groups for funding. It would house men’s and women’s gymnastics, wrestling and volleyball.”

Getting a hockey program would be an investment that could have a positive trickle-down effect on some of the biggest sports on campus. Similar to how the football and basketball teams got new facilities to strengthen its brand, volleyball, along with the other sports, would get the same.

Right now, all three sports play in the old Huff Hall. Although it’s not awful, a brand new stadium in downtown Champaign would be a major upgrade, as it shows dedication and innovation, allowing the programs to have a nice recruiting tool against other top tier programs.

In hockey alone, however, the school has the resources to have a formidable program given its built-in resources. When the hockey team does come to fruition, it’ll have a conference to call home immediately with the Big Ten, along with some recruiting advantages.

“Obviously, we would get new facilities and scholarships,” said Illinois club hockey head coach Nick Fabbrini in March. “We are talking about a whole new caliber of players who would come here. With the talent here (in the state), we lose like 80-90 players every year to Division I programs. The interest would be right off the bat.”

While Illinois has the potential to become a formidable program, the path to becoming a contender will take years. In order to balance the team with a combination of all classes, Illinois will have to spread out scholarships for years to avoid an overload of one year. And although Illinois has a built-in conference in the Big Ten, traditional powers like Ohio State and Notre Dame will likely have a competitive advantage for several years to come. Illinois to Big Ten hockey could be like Rutgers to football for the foreseeable future.

Before Illinois can worry about becoming a contender, however, they need to figure out the financial situation. Like virtually all college programs, Illinois is set to lose millions of dollars of revenue due to football and basketball cancellations, which funds most of the non-revenue sports. Unfortunately for hockey, who haven’t even started construction on the new arena, the first season will continue to get pushed back.

“The hope was 2021,” Brown said. “Now it’s 2022. (But really) there’s no timetable because of (COVID-19). Josh (Whitman) has been very clear. We don’t know where we will be in May or June. Safety will always be the top concern, and it drives every decision.

“Some tough decisions will have to be made if games aren’t played.”