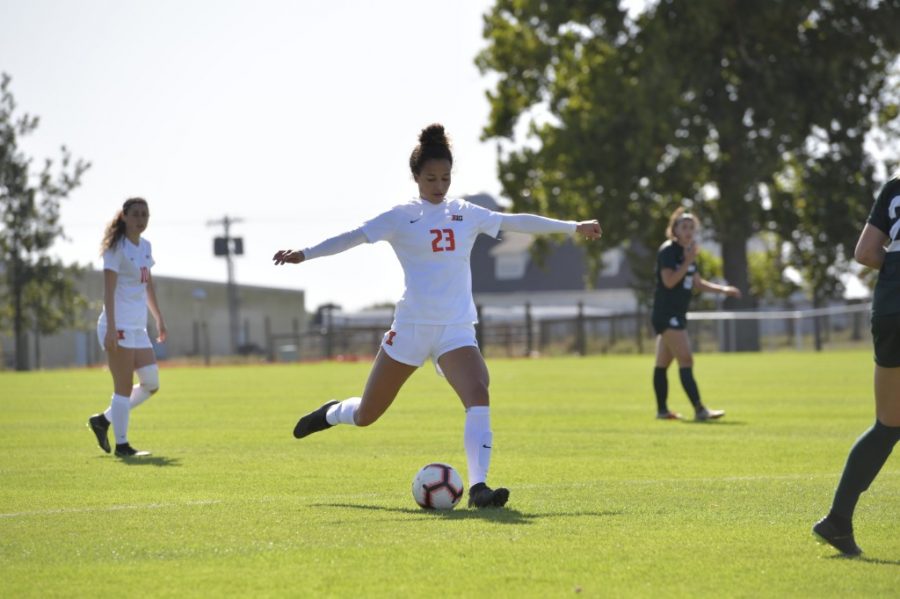 Former Illini Arianna Veland passes the ball during the game against Michigan State on Oct. 13. The Illini won the game 2-1.

According to Upper V Athlete Management via Twitter, who represents Veland, on Friday, Sept. 4, she had signed a contract and is set to play in the 2020-2021 season.

“Congrats Arianna – the @uppervatheltes family wishes you the best of luck in Germany,” said Veland’s management on Twitter.

While the two will play in Germany together, they won’t get the chance to verse each other. Flaws and SV Meppen play in the conference Frauen-Bundesliga (Women’s Federal League), which is a tier above Veland and FWK in the 2. Frauen-Bundesliga.

For Veland, her first year with FWK will look different due to COVID-19. The league that Veland is playing in right now has separated the 19 teams into two groups. By the end of the 2020-2021 season, the top finishers of the two groups will be promoted to the Frauen-Bundesliga.

Over the course of Veland’s four years at Illinois, she played in 74 games and scored a total of 10 goals.

When the Elkhorn, Nebraska native arrived at Illinois, she immediately started to gain experience at the college level. From the 19 games of the 2016 season, Veland played in 17, earning 347 minutes on the field.

By the time of Veland’s sophomore year, she had earned a spot in the line-up starting in 18 out of the 19 games that season tallying two goals over the course of the season.

During Veland’s 2018 junior season, she started in all 20 games as an Illini. Veland scored a total of three goals, with two of them being game-winners against No. 14 Oklahoma and Minnesota. In a game against Purdue, Veland tallied her only assist of the season in a game-winning goal flicking a header off to midfielder Katie Murray after a flip throw-in from defender Alicia Barker.

By Veland’s senior season in 2019, she started all 18 games, scoring five goals with 17 shots taken and 10 shots on goal.

In Veland’s four years at Illinois, she played over 3,400 minutes on the field.

Prior to coming to Illinois, Veland went to Elkhorn South High School in Nebraska, where she was a three-time Eastern Midland Conference All-Conference selection and an Omaha World-Herald Honorable Mention All-State.

Veland helped her high school to three State Final games and in 2011 helped her club team, Omaha FC, to a State Championship title.