Hutcherson prepared for lofty expectations at Illinois after year off 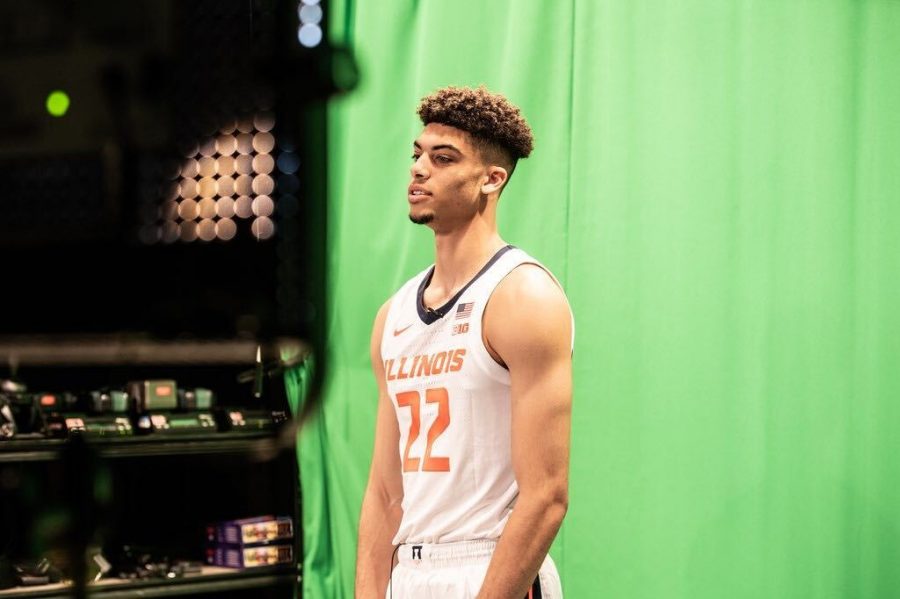 Illini redshirt junior Austin Hutcherson poses for a promotional picture for Illini Athletics on Oct. 11, 2019. Hutcherson is expected to make an immediate impact after sitting out a year.

Shooting the three-pointer was anything but easy for Illinois in the 2019-2020 season. As a team, they shot 30.3% from behind the arc, finishing dead last in the Big Ten and 311th in the country. Improving on shooting is a must for Illinois this season.

Enter redshirt junior Austin Hutcherson. Hutcherson sat out last season due to NCAA transfer rules, but he was a sniper in his two seasons at Wesleyan University. He shot 44% from deep as a freshman and 39% from deep as a sophomore. Hutcherson will be desperately needed to shoot at that rate again, and he has a grasp of what is needed for him this upcoming season.

“My role, I’d say being that guy that can stretch the court,” Hutcherson said. “Whether it’s deep in the three, from the corner or that NBA spot on the wing. Giving that spacing so guys like Ayo (Dosunmu) and Trent (Frazier) can get into the lane and do what they do and give Kofi (Cockburn) some room down there.”

Sitting out for a season was not easy for Hutcherson, but he now has a better understanding of the offense. He said there were some bad days, but overall the year helped him grow.

“I’m a completely different person after one year,” Hutcherson said. “I think I have more of that killer instinct of attacking. I learned that from going against our guards every day. I think physically my vertical increased a bunch, my strength is up 10 to 15 pounds.”

The hype has been building around Hutcherson during his year off. CBS Sports’ Jon Rothstein has compared Hutcherson’s story to that of former Michigan star Duncan Robinson. Robinson, who now starts for the Miami Heat, played one year at the Division III level before transferring to Ann Arbor. He scored 9.3 points per game on 41% shooting from three, numbers Hutcherson is certainly capable of.

Hutcherson is aware of the outside noise, but he uses that to motivate him.

“I see it as appreciation. I hope to have people expect stuff of me,” Hutcherson said. “That expectation is what drives me besides my own goals. Having that expectation every day gives me a reason to come to work and get better.”

After losing wings Andrès Feliz and Alan Griffin in the offseason, head coach Brad Underwood will need Hutcherson to be effective immediately. The backcourt is crowded with junior Ayo Dosunmu, and seniors Trent Frazier and Da’Monte Williams back, along with incoming freshmen Andre Curbelo and Adam Miller, but Hutcherson is the best theoretical shooter. That shooting ability could lead to him getting plenty of minutes on the wing.

As a sophomore, Hutcherson led Wesleyan to its first-ever NCAA Tournament victory, and Hutcherson has watched the NCAA Division I Tournament since he was a kid. Illinois expects to get there in 2021, and Hutcherson’s performance could play a huge part in their success.

“It’s really weird going on ESPN now and seeing talk about the Big Ten and it actually pertaining to me,” Hutcherson said. “So I think going to the tournament and making a big run would mean everything. It’d be a dream come true.”