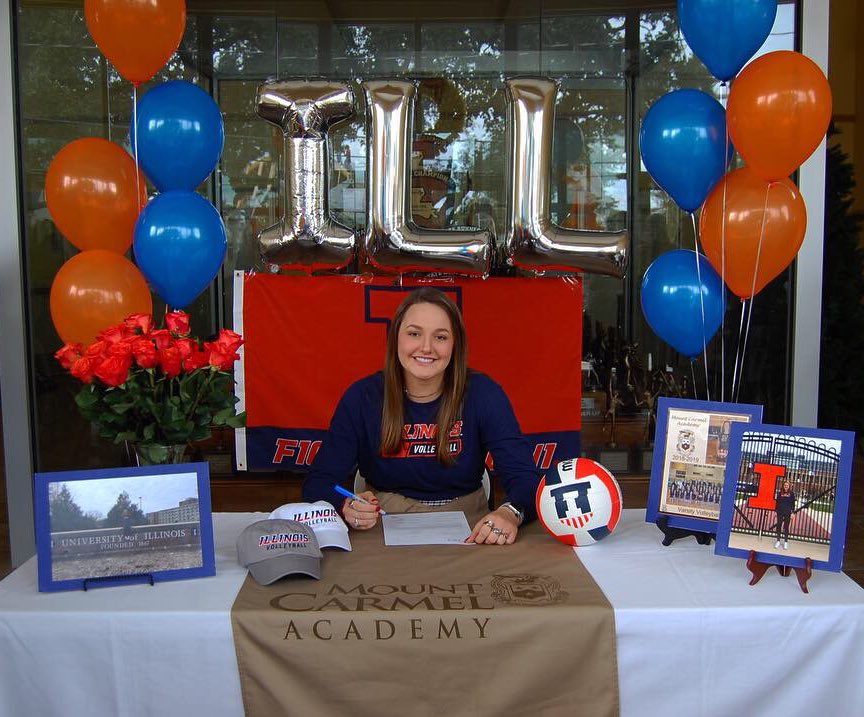 Redshirt freshman Ellie Holzman officially commits to the University of Illinois on Nov. 29, 2018. Holzman is expected to fill some of the gaps left by the prior seniors.

When Illinois volleyball returns, there will be some big shoes to fill due to the loss of four seniors who graduated last year. With the exit of Jacqueline Quade, Caroline Welsh, Beth Prince and Ashlyn Fleming, the team is now beginning to look substantially different from Illinois’ 2018 Final Four roster. To help bridge the gap, however, the Illini have pulled an impressive 2020 freshmen recruitment class, along with the addition of talented redshirt freshman Ellie Holzman.

The 2020 recruitment class was ranked 20th nationally by PrepVolleyball.com and is headlined by three new freshmen: Maddie Whittington, Raina Terry and Sophie Gregus.

Whittington was a highly accomplished middle blocker in high school, including being named to the 2019 Under Armor Second-Team All-America and Suburban East All-Conference in 2018. Despite her experience as middle blocker, head coach Chris Tamas plans to move her to either outside or opposite hitter. Standing at a team-highest 6-foot-4-inches, Whittington will likely be an asset to the Illini for years to come.

“When we recruited (Maddie), her coach was like, ‘look, she can do lots of things. She’s good with her ball control, she’s a good blocker, she’s a good attacker,’” said Tamas about the potential position change. “When you’re looking at those things, you want to utilize them as best as possible.”

According to Tamas, Whittington came to Illinois early in the spring, which gave her time to get in roughly six weeks of practice prior to the pandemic. With the extra practice, Whittington may be able to play a larger role than a freshman normally would.

While Whittington may be the most highly-touted Illinois recruit, Terry is potentially the most experienced. Terry, a 6-foot-1-inch outside hitter, helped lead Highland High School to three KMAC championships, along with district and regional championships, during her high school career.

“She’s had a lot of responsibility back in her club days (and) high school days,” Tamas said. “We look for her to continue in the same regard. She plays at a high level and we look to continue to develop that. I talk a lot about developing six rotation players, and she’s definitely one of them that we’re looking at to do that.”

According to Tamas, Terry has been a bit streaky so far in practice. With flashes of high talent, working on consistency and reducing errors will likely be some of the first steps in an Illini jersey.

The final new freshman on Illinois’ roster, Sophie Gregus, will likely also be looking to transition positions. Gregus played outside hitter in high school, but according to Tamas, she is a bit undersized at 6-foot-1-inch to play the position for Illinois. The Illini will look to move her to  defensive specialist and libero.

So far in practice, all three freshmen have been highly competitive.

“We scrimmage every Friday, and they hold their own in all the scrimmages (and) any competitions that we hold,” Tamas said. “(We’re) very pleased with what we’re getting with them, on and off the court.”

The most impactful addition to the roster will likely be redshirt freshman Ellie Holzman. She has an incredibly long list of high school accomplishments, as she is a four-time Division I Louisiana state champion with Mount Carmel Academy, a three-time Louisiana Gatorade Player of the Year and was named the 2018-2019 Gatorade National Volleyball Player of the Year.

Holzman, slotted to play outside hitter and middle blocker, redshirted during her first year at Illinois due to a preseason injury. According to Tamas, she has completely recovered from her injury and with a strong arm, she may have an immediate impact on the Illini.

“Players don’t always bounce back as great as Ellie has,” Tamas said. “She fits right in with what we’re recruiting. I think she’ll carry a heavy load for us heading into future years. She’s competitive as you would want to see, and she’s a really great teammate on top of that.”

With so many assets from Illinois’ Final Four team gone, Tamas is now faced with the new and difficult challenge of remaining competitive after first breaking through. The combination of the current talent on the roster and Tamas’ ability to develop his younger players will determine if Illinois can retain their status as an elite volleyball program. For now, the Illini have time on their side to prepare due to the postponement of the volleyball season.

“(I’m) really excited about who we have,” Tamas said. “We’ll be young this year. We replaced five starters from the previous run of NCAA tournament appearances. We’re going to look brand new to a lot of people. Very excited that we have some great people in the program — really hungry, really competitive and just excited for the future.”