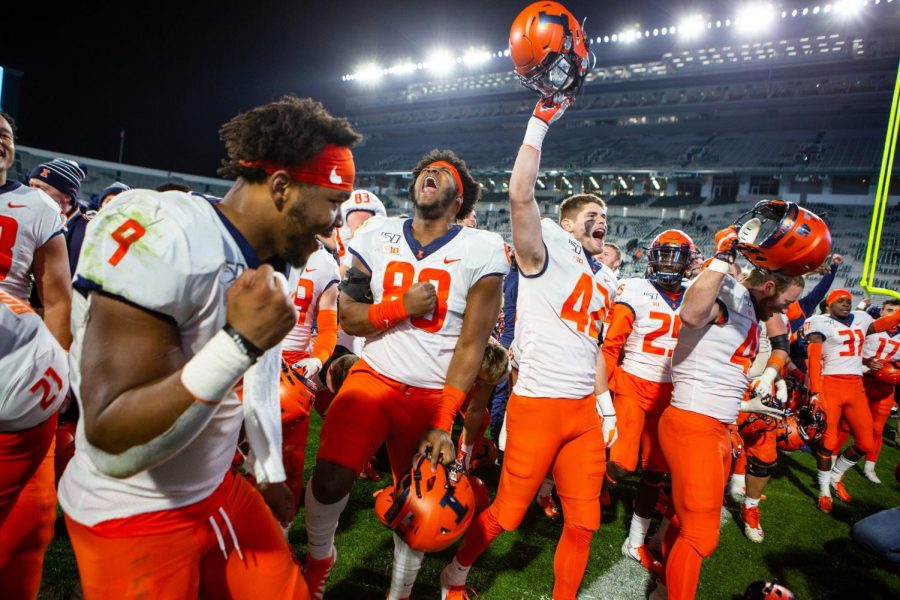 The Illini Football team erupts in celebration after defeating the Michigan State Spartans on Nov. 9, 2019. The Illini won 37-34. The Illini now have the chance to build on the success in 2019 as this season is set to start Oct. 23-24.

Big Ten football is back. The conference announced in a press release on Wednesday it has voted to start its college football season on Oct. 23-24.

“The Big Ten Council of Presidents and Chancellors (COP/C) adopted significant medical protocols including daily antigen testing, enhanced cardiac screening and an enhanced data-driven approach when making decisions about practice/competition,” the release said. “The COP/C voted unanimously to resume the football season starting the weekend of October 23-24, 2020. The decision was based on information presented by the Big Ten Return to Competition Task Force, a working group that was established by the COP/C and Commissioner Kevin Warren to ensure a collaborative and transparent process.”

The press release indicates all “student-athletes, coaches, trainers and other individuals that are on the field for all practices and games” will undergo daily testing starting Sept. 30. All student-athletes that test positive for COVID-19 will have to “undergo comprehensive cardiac testing” and cannot return to competition for at least 21 days following a positive diagnosis.

After voting to postpone the season on Aug. 10, the conference presidents re-voted and decided to have a fall college football season, first reported by the Milwaukee Journal Sentinel early Wednesday morning. The decision comes after two successful weeks of college football, including one week of Power-5 games.

Speculation intensified on Tuesday morning when a video surfaced on Twitter of the University of Nebraska president getting caught on a hot mic before a news conference saying “We’re getting ready to announce the Huskers and Big Ten football tonight.”

Optimism for a fall season started over the weekend after a comprehensive plan was presented to the Big Ten presidents with an emphasis on medical protocols that had changed in recent weeks and became available to the league.

Players, coaches and fans have been expressing their eagerness for a fall season ever since the season was originally postponed. This included a petition started by Ohio State quarterback Justin Fields and multiple Big Ten head coaches making formal statements on their desire for a fall season.

The Big Ten said updates regarding other fall sports and winter sports will be announced shortly.