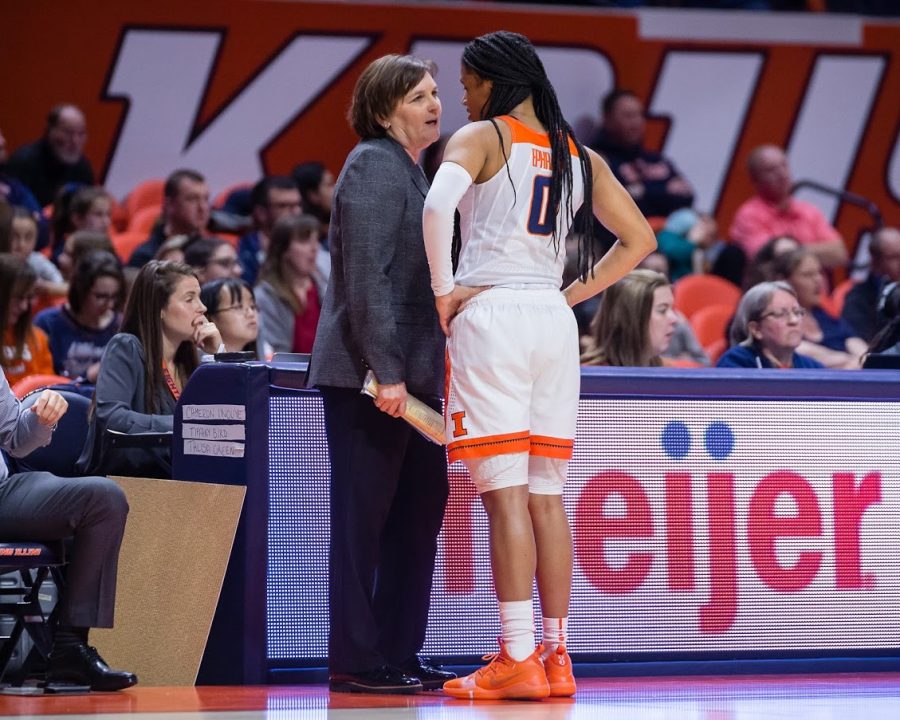 The women’s basketball team is in the midst of a roster overhaul. After losing three of the team’s top four scorers from a season ago, head coach Nancy Fahey is going to have to figure out how this roster can compensate for the departures. She’ll have to start by looking at her three freshmen: Erika Porter, Aaliyah McQueen and Aaliyah Nye.

Porter, a forward out of Lawrenceville, New Jersey, attended Notre Dame High School, where in the first game of her senior season she scored the 1,000th point of her career. Porter’s game is heavily predicated on dominating inside. At 6-foot-3, Porter is able to punish opponents near the rim, protect the paint and hit the glass at both ends of the court. The Illini will need this after a season where size was missing.

“Last season we were just too small,” Fahey said. “(Opponents) could be on our shooter, and it was hard to get clean shots off.  Now they’re going to have to make decisions.”

Porter finished off her career with back-to-back Colonial Valley Conference Player of the Year honors and was named to the CVC’s first team.

The Illini are also bringing in guards McQueen and Nye. McQueen was a highly-touted prospect out of Carman-Ainsworth High School in Flint, Michigan. McQueen started high school at Goodrich High School before transferring to Carman-Ainsworth after her freshman year. In four years, McQueen finished with a record of 76-21, winning four district championships while being named to the AP Division 1 All-State team.

Standing at 5-foot-9, McQueen is a quick and athletic guard who looks to take threes while also having the ability to attack the basket. With the Illini losing guards Brandi Beasley and Petra Holešínská to graduation and the transfer portal, respectively, McQueen will have the chance to compete for a lot of minutes on a roster looking to turn around their lack of success during Fahey’s tenure.

As for Nye, a 5-foot-11 guard out of East Lansing High School, she was one of the best players in Michigan. She finished her senior season averaging 16.1 points, 5.2 rebounds, 1.9 assists and 1.7 steals per game. Nye’s East Lansing squad sat at a record of 23-1 and was getting ready to play for the regional title in Michigan’s state tournament before their season was suspended and eventually canceled due to the coronavirus. Despite being unable to finish out her career, Nye was named the AP Division 1 State Player of the Year in Michigan.

In her time at East Lansing, Nye became the eighth player in program history to surpass 1,000 career points, amassing 1,370 total points, while finishing with a record of 90-8.  Nye’s high school coach, Rob Smith, has called her a “team-first player” and complimented her selflessness. Nye has the ability to play multiple positions with her size, and her ability to score at three levels will be vital for the Illini. Along with her ball-handling ability and willingness to take on contact, Fahey has a player to build around.

Fahey seems to have a budding pipeline in Michigan after getting two high-quality players in McQueen and Nye.

“As coaches, you start developing relationships,” Fahey said. “We focus on Illinois, we focus on Minnesota and the Midwest or a great player in a different part of the country. What happens is you get great players from Michigan that say, ‘this is a great place to play’ and sometimes the word of mouth, which is what happened, helps.”

As the freshmen continue to acclimate with the team, they’ll have to be prepared despite how the season shakes out. Without a firm commitment from the NCAA, this team will be held in limbo. Throw in the fact that the coronavirus has changed what student life is like, and athletes get a situation that incoming freshmen have never seen before. Fahey doesn’t seem too worried about how this class is adjusting, however.