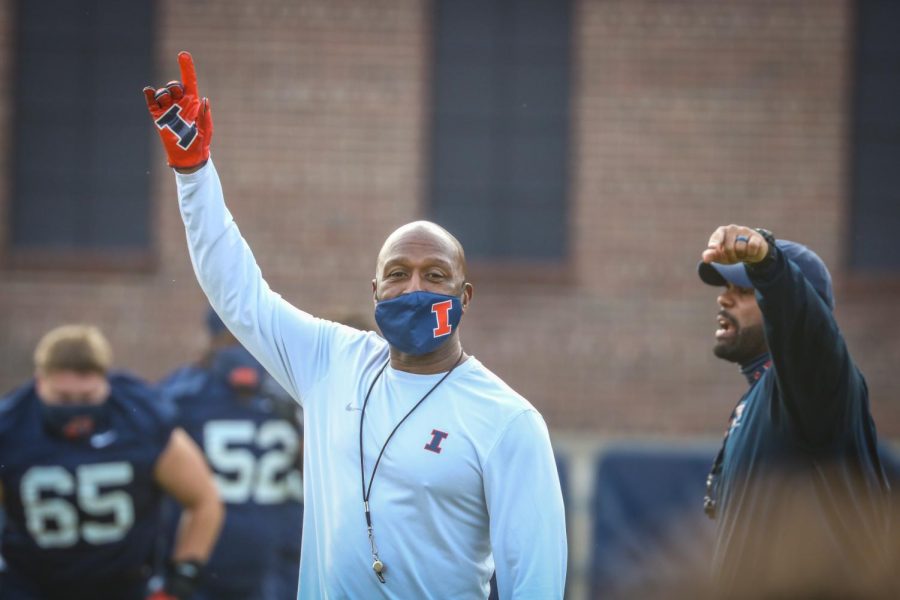 Illini football head coach Lovie Smith waves at the team’s first practice since the BIg Ten’s decision to reinstate the fall football seaosn. The Illini have roughly four weeks to practice before the season begins.

After an announcement came Wednesday morning, the Big Ten will officially be playing football in the fall again. Despite the league deciding to postpone football until the spring in August, a re-vote took place and after a unanimous decision, the season will now start the weekend of Oct. 23-24.

University of Illinois Chancellor Robert Jones, Athletic Director Josh Whitman and head football coach Lovie Smith met with the media over Zoom on Wednesday to discuss the decision to return this fall.

Chancellor Jones, who initially voted to postpone the football season in August, said the decision came down to the medical advancements throughout the conference over the past several weeks. The Big Ten received a lot of criticism from players, coaches and fans immediately after the initial vote, but despite the pressure to reschedule to the fall, Jones said the decision strictly came down to the medical side of things.

“We find ourselves here on this day, Sept. 16, in a position where we could make another data-driven decision,” Jones said.

The main dilemma back in August, Jones said, was the amount of testing. He didn’t feel comfortable voting to play in the fall if there weren’t enough tests available for consistent testing, but since the initial vote, tests have become more available.

“You had to be able to do testing and deliver that testing in a timely fashion,” Jones said. “Daily testing is absolutely critical.”

Players and coaches will be tested every single day with an antigen test. An antigen test will be available every day for players and helps detect the virus faster than the saliva test used at the University. Illinois associate athletics director for sports medicine Randy Ballard called the antigen test a “game-changer” for being able to “identify someone who is infected before they can possibly infect someone else.”

If a player or coach does test positive, he’ll be given a second test to make sure it isn’t a false positive. If the result is once again positive, they are given a 21-day ban.

Chancellor Jones also cited myocarditis as one of the main reasons the Big Ten postponed in August. Now, he says, there is more information on the heart disease which helped in the re-vote. The conference will require extensive cardiac testing for any player who tests positive for COVID-19, including labs and biomarkers, ECG, Echocardiogram and a Cardiac MR. After the evaluation, players must also receive clearance from a designated cardiologist.

The season will kick off on the weekend of Oct. 23-24 and will consist of nice games in nine weeks. Each team will play an “eight-game plus one” schedule. Each team will play eight games, four home and four away, followed by a ninth game that will be determined by the final East and West division standings. For the ninth game, the first-place team in each division will play each other, second-place teams play each other and so on.

With the start not being until late October, there will not be much room for any makeup games. Their original ten-game conference-only schedule left room for rescheduled games, but Josh Whitman said this schedule doesn’t include the same adjustments.

“We don’t have a ton of flexibility there,” Whitman said. “As we go into it we know we don’t have a lot of wiggle room on the schedule, we might be in the situation where we see more cancellations than reschedules.”

In order to do whatever they can to play each game, Illini coaches are being harder on their rules for the players. They are asking them to make safe decisions when they’re not at practice in order to be able to play a full schedule.

Whitman told the players, “We’re gonna let you go out there and play football, but in order to do that you’re going to have to be prepared to make certain decisions and sacrifices in your personal life that may not be mirrored by your peers.”

Another adjustment that the players will have to make will be playing inside a near-empty stadium. The conference has decided not to sell tickets to fans, although there will be a small number of people in attendance.

“There will be a conference mandate that would have no public tickets sold,” Whitman said. “It’s important, of course, for families of our student-athletes both home and visiting, as well as the families of our coaches and staff members to have a chance to be in the building and support their loved ones.”

Despite having not been in organized practices since the day the season was postponed back in August, Lovie Smith feels his team is still in football shape. The players haven’t been scrimmaging or getting reps in, but they have been working out consistently.

“We feel very confident that our guys will be in good condition to be able to pick up with full speed ahead practices and be ready for a season that’ll be a little bit different,” Smith said. “Even when we paused our season, we continued to lift and everything.”

The last few months have been frustrating for everyone involved but the decision to play this fall has brought a new level of excitement to the entire football program.

“We have had, I think as everybody knows, a number of hard days here over the last six months,” Whitman said. “But this is not one of them. This is a day when we can smile and feel good about the decision we’ve made.”

The only thing not yet determined is who each team is playing, but an official schedule is expected to be released in the next coming days.