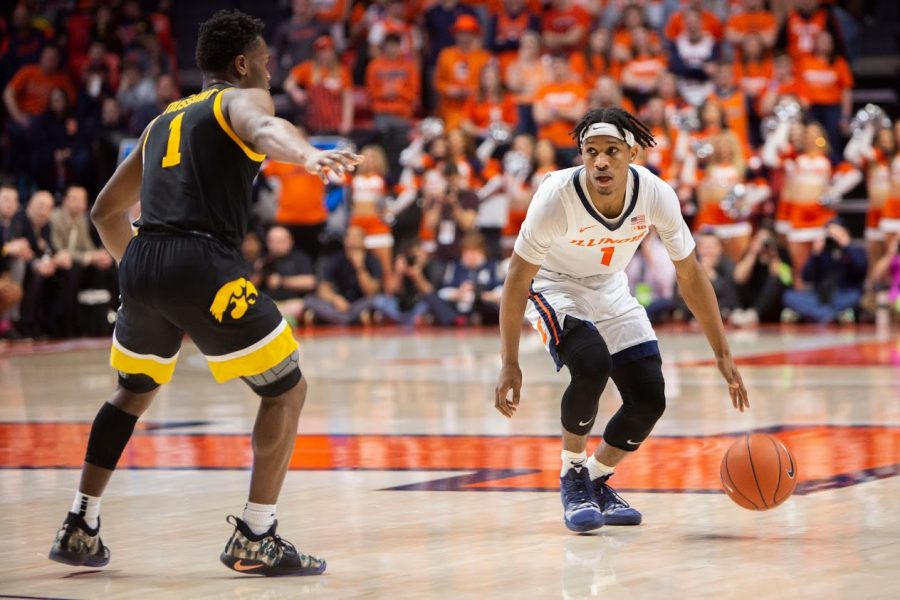 Current senior Trent Frazier surveys the in court front of him during the game against Iowa on March 8. The Illini beat the Hawkeyes 78-76.

Throughout his four years at Illinois, Trent Frazier’s passion for the basketball program has never wavered. In an era where players transfer constantly, Frazier decided to stick things out at Illinois through the good and the bad.

The West Palm Beach, Florida native certainly could have left the program. He was initially recruited by John Groce and his staff, before Groce was let go prior to the 2017 season. Frazier remained committed to Head Coach Brad Underwood and showcased his ability to score as a freshman, earning a starting spot for the last 16 games of the season. Frazier has started 60 of 63 games since then.

Frazier had his best season as a sophomore, averaging 13.7 points per game on 40.6% shooting from deep. Despite his individual success, Illinois went 26-39 in his first two seasons. After a scorching sophomore year, Frazier easily could have bolted to another high-major program. Of the five-man 2017 recruiting class, only Frazier and Da’Monte Williams remain.

The benefits of staying paid off, as the Illini went 21-10 last season and were on pace to make their first NCAA tournament appearance since 2013 before the season was cut short, though the Illini appear to be even better this season.

“Having our season cut last year, knowing that run we had in the spring is very upsetting, but there’s a lot of excitement around this team right now,” Frazier said. “We’re very excited to play basketball and get back to what we do.”

Statistically, Frazier’s 2020 season was the worst of his tenure in Champaign. He had a career-low in points per game (9.84), assists per game (1.9) and three-point percentage (30.9%), but beyond the box score, Frazier made a huge impact. He became Illinois’ best perimeter defender, constantly tasked with guarding the opposing team’s best backcourt player. As a result, Frazier had a career-best player impact plus/minus at +3.10.

As a freshman, Frazier was asked to handle the load offensively. But when Ayo Dosunmu joined the Illini, his role shifted. Now, Frazier is comfortable as a defensive stopper, something he was not always accustomed to.

“I don’t think I played defense before, until I got to college, until I got to play for Coach Underwood,” Frazier said. “My mindset now is whenever I’m guarding someone I literally don’t want them to score at all.”

For Illinois to reach its potential, Frazier will need to use his sweet lefty shooting stroke on offense. In the offseason, Frazier worked on his shot and studied film with the staff to improve his game.

Frazier knows what the expectations are for this team. For the first time in his four year tenure in Champaign, the Illini will likely be ranked in the preseason, and they are expected to contend for a Big Ten title. However, the energetic guard says the team is not focused on the noise right now but rather on playing “Illinois basketball.”

A deep postseason run would mean a lot for Frazier. He has experienced the highs and lows of college basketball while seeing his role switch from year to year. As much as it would mean to him, he knows what it would mean to this program.

“I think it’s a bigger piece for the program, knowing we haven’t been to March Madness in a while,” Frazier said. “Just knowing I was able to be a part of something special and be a part of a program where I helped change and rebuild to get Illinois basketball back to its greatest.”