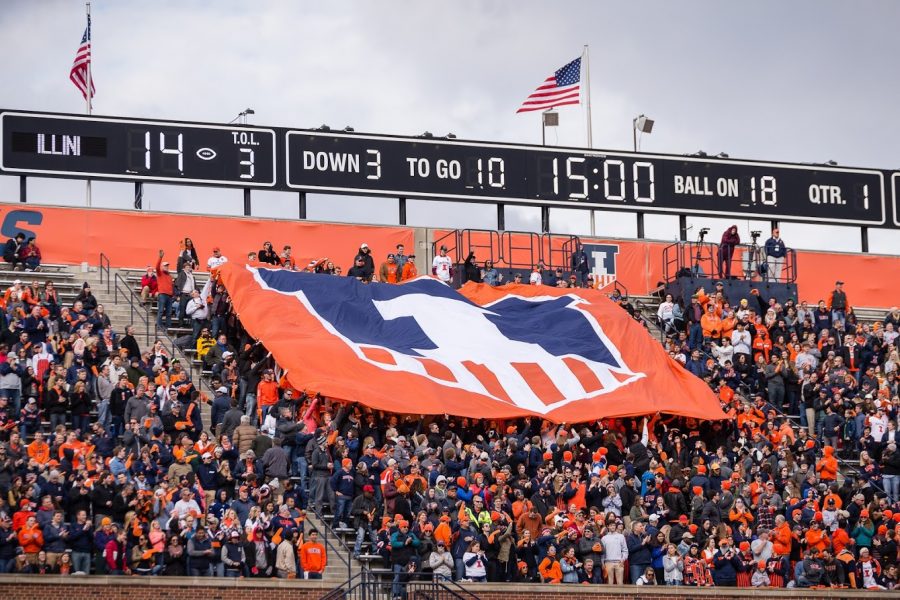 The Block I student section hoists a banner with the Illinois shield logo during the game against Minnesota at Memorial Stadium on Nov. 3, 2018. Though the north stands will be empty this season, fans are still excited about the return of Big Ten football.

Nov. 30, 2019, should have been a forgettable day in Illinois football history. As rain poured down on a cold fall day, an injury-ridden Illinois team limped into the final regular-season game against in-state rivals Northwestern with a bowl game berth already clinched. Ultimately the Illini fell 29-10, despite the Wildcats’ quarterback only completing six passes for 55 yards. No one expected that to be the last game at Memorial Stadium for nearly 11 months.

Illinois will finally take the field at Memorial Stadium again on Oct. 31, this time with no fans and a global pandemic still affecting millions across the world. Resuming Big Ten competition was never going to be an easy task, and inconsistency and a lack of confidence from top conference officials in their initial decision always left the possibility of a fall season in play.

Throughout the summer, Caitlin Basden, junior in LAS and Block I gameday chair, focused on planning for a season despite early rumors that the Big Ten would cancel their season. She says remaining optimistic helped her grapple with the idea of a fall without football.

“Seeing all the (Illinois) players saying, ‘We should be playing right now,’ I think we all realized how much this sucks, but we still had a little hope,” Basden said. “There was hope always there, but I think we knew what would happen would be the best for everybody in the end.”

Block I made plans for the student section if fans were allowed in the stadium, including spaced-out, “pod-style” seating and alterations to the infamous halftime card stunts. Though students will not be allowed to attend games this fall, Basden ensured that the student section would be prepared for any situation.

On Wednesday, 36 days after conference commissioner Kevin Warren’s first announcement that brought about the decision to cancel all fall sports competitions, the Big Ten made a U-turn and opted to reinstate football. For lifelong Illini fan Jason Rahn, seeing the seniors get a chance to play one last season is the best part about the updated announcement.

“I was just happy for the seniors, the guys who have NFL aspirations especially,” Rahn said. “They have time to show off those skills that they have and not really have to rush the process.”

For Jason’s 11-year-old son Colton, however, Illinois football is a second family. Colton, who has cerebral palsy, became a huge fan and friend of former Illini wide receiver Mikey Dudek due to his multiple comebacks from injury and is now close with the entire squad. Colton’s flag football team has even been coached by members of the football team, including former star running back Reggie Corbin and current Buffalo Bills linebacker Del’Shawn Phillips.

Hearing that the season would be returning “brought tears to Colton’s eye,” his dad says.

“It really is because he has such a love for the guys,” Rahn said. “He never really understood why he was allowed to play flag football, even though he knows there’s a difference. He wasn’t sure why we could do it but a big league like the Big Ten couldn’t.”

Like thousands of other diehard Illinois fans, Jason and Colton Rahn won’t be able to attend games at Memorial Stadium this season. For Tom Alvarez, Illinois alum and former Twitter moderator for Illini Barstool, watching from afar doesn’t matter much because he will always have great pride in the team.

“There’s just a sense of pride when watching the team, especially for a school I love so much,” Alvarez said. “That’s one of the great things about going to a Big Ten school.”

Basden echoed the pride of being an Illini, as she is always excited to sit behind the north end zone and cheer on her team.

“Sitting in the stands, it’s kind of the same feeling as when I played sports in high school and my teammate did something good,” Basden said. “I’m just proud to go here and that’s my team on the field. It doesn’t matter what the score is; I know they worked their hardest and gave it their all. That’s what matters.”

Home games will feature no fans for the 2020 season, though Memorial Stadium will always be much more than just a stadium to Illini fans. For Colton, it’s his “home away from home.”

“There’s always jokes made that if Colton ever got lost in Champaign, we would know where he would go,” Rahn said.

With the release of the Big Ten schedule on Saturday, Illinois will take on Wisconsin at Camp Randall on Oct. 24, with the first home game coming against Purdue on Halloween. Though players won’t be greeted by a sea of orange and blue when they run onto the field, the Illini will still receive support from across the nation, as this year’s team is expected to be one of the best in recent memory.

Regardless of how well the Illini do in this unprecedented shortened season, Alvarez encourages fans to remain supportive and excited despite being forced to stay away from Memorial Stadium during one of the most exciting years in Illinois football history.

“I know they won’t be letting fans in, but keep supporting the team,” Alvarez said. “I think they are going to have a pretty solid team to watch, so it should be a fun year.”