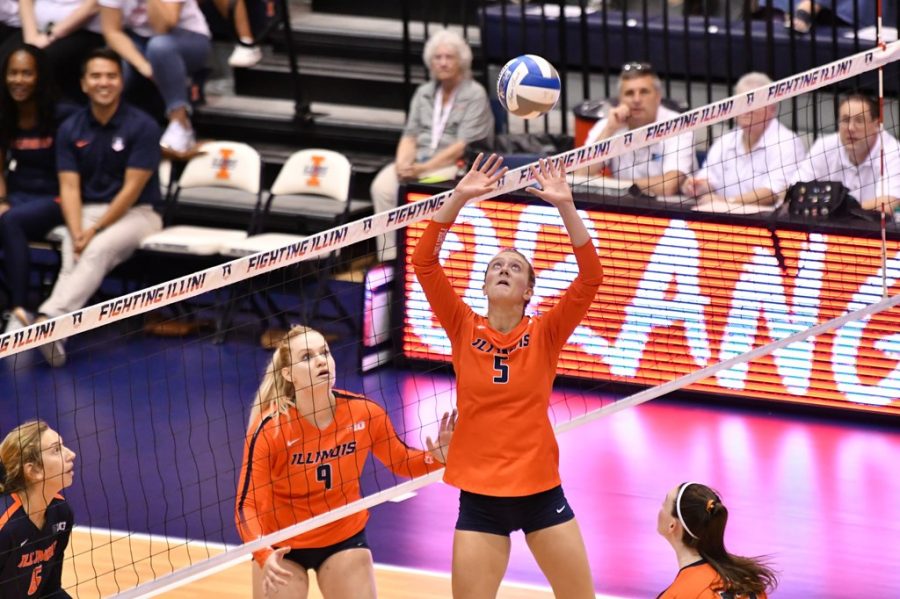 Redshirt sophomore Diana Brown sets the ball during the Orange vs Blue Scrimmage on Aug. 24, 2019. Following her redshirt season, Brown has looked to establish leadership on the court.

To some, redshirt sophomore Diana Brown might be labeled as over-competitive or too intense. After all, she models her leadership style after famous star athletes like Michael Jordan and LeBron James and has a self-described “type-A” personality. To Illinois, however, her volleyball savvy and strong personality may be exactly what the team needs to get back on track after a down year in 2019.

Brown’s redshirt season coincided with Illinois’ Final Four run in 2018, meaning she got to absorb a year’s worth of knowledge from a historic team before she even played a single college match.

“My redshirt year did help me a lot,” Brown said. “I got to experience every gym environment that I could on the road (during) my freshman year. Playing last year, I wasn’t really nervous playing in front of the crowds or the venues or anything like that.”

Being an accomplished high school player and having the experience from her redshirt year, Brown saw plenty of game action in her first season. Her production was relatively strong as a setter on the court, but mentally there were some growing pains transitioning to the college game. Early on, Brown struggled in high-pressure situations.

“She used to get a little worked up, which is so easy to do,” said senior teammate Megan Cooney. “I would say she’s learned how to be better in pressure situations. She’s a little bit calmer now. Last year towards the end of the season she did a great job bringing everyone in, calming everyone down before each point even if we were in a pressure situation. She did a great job toward the end of the season of getting out of her own head and reaching out to teammates, making sure that we’re all in it, we’re all ready for the next point.”

A lot of Brown’s intensity comes from the serious club volleyball environment she grew up in. In her club volleyball days, Brown would do long drills, such as what she called “repping it out,” which meant practicing an action repetitively until she could do it with absolute precision. For example, in setting training she would often set upwards of 1,000 volleyballs in an hour and have each individual set critiqued by a coach.

Understanding that not everyone shares her exact level of intensity was an important early lesson for Brown at Illinois. According to Brown, it was eye-opening to understand that many of her teammates came from different volleyball backgrounds in which practice wasn’t quite as demanding.

Beyond just her teammates, head coach Chris Tamas also promotes a different culture around practice from what Brown was used to.

“I would say that Chris is huge about being efficient when in the gym,” Brown said. “He is a huge believer that the best volleyball doesn’t come when we’re tired. I guess pushing through always helps, but in order to be efficient, we need to come to the gym (and) get done what we need to get done. That was new (to) me. I didn’t really have that in my high school days.”

Another thing Brown has worked on has been her leadership. Being a strong leader is important as a setter, and Brown felt she could have done a better job as a leader last season.

“(Leadership) was at times forced (last year),” Brown said. “I’m very type-A and so when things in my mind that I wanted to happen didn’t happen in real life, (I would think) ‘why isn’t that happening my way?’ Now, I step back and realize — it’s not all about me. There’s 16 or 15 of us girls and a whole entire coaching staff, so it can’t be all about me. I have to put the team’s needs in front of mine. I’m completely comfortable with that now.”

To help remedy her shortcomings as a leader last season, Brown has applied her detail-oriented approach as a setter to how she handles relationships with her teammates. She’s worked to develop one-on-one relationships with all of her teammates, which she feels will make everyone more comfortable receiving assists from her on the court.

By getting to know each of her teammates well, Brown hopes she’ll be able to better motivate each player as an individual. She strongly believes leadership shouldn’t be done through a one-size-fits-all approach, and that being friends with her teammates off the court will help her be better at knowing what to say to them in big moments.

In terms of how she came to her leadership approach, she credits some inspiration to Illinois volleyball alum Blayke Hranicka. Hranicka had gotten good playing time in the 2017 season, but in 2018, she was delegated to the bench. Brown has a large admiration for how Hranicka accepted her reduced role.

“She took on the role of helping the middles when they came out,” Brown said. “Helping (suggest) what shot they should do or tendencies of the other hitters for blocking. She always was the first person to spot up someone who was in their own head and encouraged them and helped them and supported them. She never complained about her role. She really took on her own role and I think that was a huge part of our success.”

While Brown has worked to be more of a team-first leader, that doesn’t mean she’s lost her focus on hard work. During the offseason, Brown watched “The Last Dance,” and it reinforced her values in grit and determination.

“Something that stuck out to me was that Michael Jordan never asked something of his teammates that he wouldn’t do (himself),” Brown said. “I’m not going to expect something out of my teammate that I wouldn’t expect of myself. I’m not going to hold others to 100% effort if I can’t hold myself to that, too.”

Looking forward, Brown will soon get the opportunity to showcase how much she’s improved as a leader. She’s mentioned a distaste for comparisons to the team’s previous star setter, Jordyn Poulter, as Brown feels she should be seen as her own unique self. When volleyball returns, Brown will get the chance to showcase exactly the type of individual she can be. Last season’s shortcomings were largely attributed to faulty leadership, so all eyes will be on Brown.

She’s counting on it.